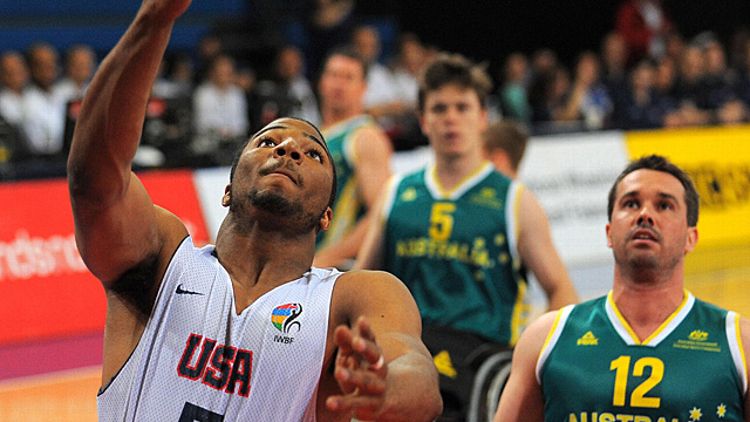 The Paralympics are here, people! Are you excited? I’m excited! Who’s with me?

OK, we seem to have a hype deficit here, but this is a solvable issue. I prescribe watching this for 90 seconds.


CHUCK D INSTRUCTS YOU TO BELIEVE THE HYPE. And you’re not going to argue with Chuck D, are you? Host broadcaster Channel Four’s superb trailer for their Paralympic coverage has got everyone in Britain doing two things: talking, and buying tickets. As a result, organizers are confident that the Games will sell out, and not in a way that will make Chuck angry. (OK, to be fair, Chuck’s always angry, but at least it won’t make him any angrier). That level of domestic interest means that these Paralympics are going to rock hard, with over 4,000 competitors chasing down 500 gold medals in front of a hugely partisan crowd in packed venues. If you’re missing the Olympics and need a second dose of excitement, drama, controversy, and atmosphere, the Paralympics has your back.

Of course, if it’s human interest fluff that you want, then I’m sure you’ll have no trouble getting your tears jerked. It will be interesting to see how NBC approaches the Paralympics; they’ve already drawn enormous criticism for booking a mere five and a half hours of airtime for the entire Games, but how much of that coverage will feature actual sport? The only record that could be broken on NBC’s airtime is the world JPH (journeys per hour) mark, as aspiring producers with dreams of promotion to the major leagues (also known as America’s Got Talent) bombard viewers with inspirational tales of triumph over adversity. And as they’ve only got five and a half hours to do it in, don’t expect too much coverage of the marathon. Fortunately, the IPC will be multi-streaming live coverage on their website, so wherever you are, you can watch the sport live, and catch up with the emotional stuff later, should you so desire.

Hopefully, the coverage of the Paralympics won’t dissolve into a saccharine mulch of biographical packages set to overblown ballads, as it will completely miss the point of the Games. Focusing on the backstories of Oscar Pistorius, Natalie du Toit, and Natalia Partyka makes sense in the Olympics, where their amputations set them apart from their opponents, but at the Paralympics, the only thing that can distinguish them from their opponents is their ability, not their disability. With that in mind, I’d like to highlight a few competitors to watch out for over the coming days; athletes with incredible abilities that could give them an edge over their competition in London.

Take Matt Stutzman, for instance. He’ll be representing the USA in the archery competition tomorrow, and although he only took up the sport just over two years ago, he already holds a world record:

Stutzman will be competing in the “open” category of the men’s individual compound archery competition, meaning he will be taking on opponents from all classes, standing or wheelchair-bound, and with anything from zero to two arms. It remains to be seen how his abilities translate to international competition; he has yet to take part in an international archery competition. However, the targets at Lords Cricket Ground are only 70 meters away, and Matt’s proven his accuracy at over three times that distance, so he should be highly competitive, and it will be fascinating to see how he fares against the established archers.

Another Paralympian with an able-bodied record is Angela Madsen, who’ll be representing the USA in two events; the shot put, in which she holds a Paralympic world record, and the javelin, where she holds the American record. However, she won’t be competing in the rowing, which is slightly surprising, as she is also in the Guinness Book of World Records for being the first woman to row across the Indian Ocean. The fact that she’s paraplegic is about as relevant to that achievement as the fact that she’s a 50-year-old with three grandchildren; all that matters is that she has extraordinary upper-body strength, and that’s all that will count when she takes to the field for the shot put final on Saturday.

The same can be said of Trevon Jenifer, part of the USA Wheelchair Basketball team who will be seeking vengeance on Canada and Great Britain, who denied them a medal in Beijing. Jenifer has no lower body, but his upper-body strength is such that before he took up shooting hoops, he had a winning record on his high-school wrestling team. With that kind of strength, and an arm span of 6 feet, 4 inches, Jenifer’s going to cause his opponents eight different kinds of problems on the court; Team USA start their campaign against Turkey tomorrow.

Finally, we have Italy’s Alex Zanardi, and here it would be remiss not to talk a little about The Journey, as Zanardi’s name may well be familiar to you already from his career in Formula One and Indycar racing in the 1990s. Zanardi survived a horrendous crash in 1993 that placed his body under such extreme stress that his neck was found to be three centimeters longer after the collision. However, that’s not what he’s famous for; he’s best known for an overtaking maneuver on the final lap at Laguna Seca in 1996 that was so audacious it is known to this day as The Pass, and a horrific crash in 2001 in which he lost both his legs. No amount of epic power-balladeering is going to make that moment suitable for a televised journey montage; you can find the footage on YouTube, if you like, but I warn you in advance, it’s not for the faint-hearted.

No one can accuse Zanardi of faintheartedness; despite being involved in two of the worst crashes in modern motorsports history, he returned to the track, joining the World Touring Car Championships in 200. Using prosthetics, a modified car, and some trademark audacious driving, he went on to win four WTCC races before his retirement in 2009. He’s now switched to the Paralympic sport of handcycling, and already has an impressive record, winning the New York Marathon last year. He’s a strong favorite to add more gold to his collection at the Paralympics, not least because the road cycling events are being held at Brands Hatch, which will give him a huge advantage. His opponents will be experiencing the famous British racetrack for the first time, but Zanardi has covered every inch of the track in F1 cars, and more recently on the WTCC circuit; witness this example of an audacious Zanardi maneuver going wrong at Brands Hatch in 2007. Given the circumstances, it’s hard to imagine anyone beating the Italian this week.

Stutzman, Madsen, Jenifer, Zanardi — just four incredible stories out of over 4,000. Each and every athlete in the Paralympics will have an inspirational backstory that could dampen your eyes, with the help of a talented director, uplifting background music, and soft-focus camerawork. But the wonderful thing about these Games is that when every competitor has an inspiring origin story, they all cancel each other out, and all that’s going to matter on the track, in the pool, or even on the dressage field — alright, no, not the dressage field. God knows what’s happening there. But in the other sports, the only thing that will matter is sporting excellence. And I assure you, it’s going to be extraordinary to watch.

About Last Night: The Cash Society