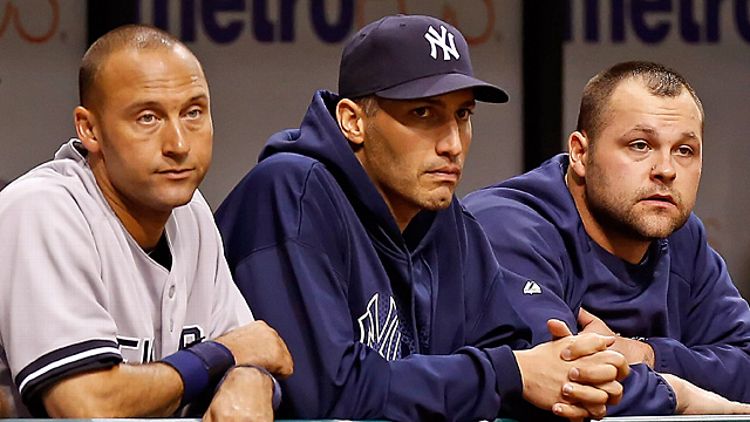 Baseball is a truly global game, uniting both players and fans across countries, across continents, across the entire world. (Can you say the same about football? You can’t. No one outside of Wisconsin really cares that much about it.) Today, we got a special visit from the Ugandan Little Leaguers, the first team from Africa to make the Little League World Series. The kids watched BP from the dugout — it must have been a thrill for them to see Andruw Jones smoke one into the second deck in left field, then sit down at home plate for a couple of minutes and take a few bites of an Almond Joy to build up his energy for his next swing. Not a lot of people get to see those kinds of “inside baseball” moments up close. But more exciting still was the clubhouse tour Joe Girardi gave the team. These are young players from very modest circumstances, so the opportunity to splash around in the Evian whirlpool while ordering custom-flavored Gatorade from the robo-clubbie had to have been a great time. And inspiring: They learned that if you believe in yourself, and work hard every day like all the major leaguers they met besides all the bullpen guys, you can one day be good enough at baseball to possibly avoid conscription in one of those awful child armies you see people talking about on YouTube all the time. They sky’s the limit for these kids. If I can survive living in New Jersey for the first four years of my life, anything is possible.

The New York Yankees is the world’s most exclusive fraternity, a sacred and eternal brotherhood that can never be broken. Well, not never. There are three ways to have your Forever Pinstripes revoked:

1) Sign with the Red Sox after you leave the Bronx;

2) Be Carl Pavano or Jeff Weaver;

3) Get caught doing karaoke with Lindsay Lohan on the Upper East Side.

It’s too bad, Pat Kelly and Shane Spencer were solid guys. But rules are rules. Without them, you’re waking up on Friday afternoon to read a TMZ story about how a hungover, husky-voiced redhead in giant sunglasses was trying to pawn the World Series rings she “found” in the bottom of her purse.

Let’s be clear on this: There’s no such thing as a “must win” game in August. We don’t even look at the standings until September; they might as well not even write them down until after Labor Day. You just have to block out all the talk about a “dwindling lead,” the “red-hot second place team,” and the “fading, injury-plagued front-runners” and just go out there and try to win. The last time I checked, the playoffs were in October, not late August. That’s the finish line. The goal isn’t a meaningless 10-game lead in the summer.

That said, a 10-game lead is more comfortable than a two-game one, if — theoretically speaking — you were even keeping track, which you weren’t, because it’s not September. After tonight’s game (which, truth be told, was not great), Girardi held a team meeting. I’m not at liberty to disclose what was said, but I can tell you this: No one is panicking. This is a clubhouse full of professionals, players who have been there and done that before, and who have a combined 4,609 World Series victories and 578 rings between them. (For motivational accounting purposes, we’re including all the ghosts of the Great Yankees who were there with us in the room. It’s valid, trust me.) They know seasons are won a day at a time, just by going out there and playing every game with an effort level of 110 percent. The result of a single game on August 31, no matter how ugly and unfortunate, is irrelevant. See you in September. And then October.

Tonight’s come-from-behind W was so satisfying we let the call-ups clean the clubhouse toilets with regular-size brushes, not the Barbie toothbrushes they normally have to use. And I had Boonie shake out most of the fire ants we’d put in their Lady Gaga costumes. This wasn’t a day for hazing, it was a day to take a deep, relaxing breath and get ready for the stretch run.

I’d never use the term “disaster homestand,” but when you suddenly stop scoring runs and go 2-4 against division rivals in your own house, you can see how there might be a temptation for the media to start throwing around language like that. It’s their job to sell papers and web pages, so you can’t really blame them, but you also can’t buy into the negativity. The only thing to do is stay positive and keep running out there, one day at a time, giving 110 percent. As Captain, it’s your job to communicate this to the team over and over again, preferably in a soothing and borderline hypnotic way.

To his credit, Girardi remains very outwardly calm, even if I can tell he’s starting to tense up a bit internally. I snuck a peak at the first page of The Binder and it was nothing but very rough sketches of dozens of skulls with giant, bloody fangs and the word WIN written about a hundred times in the margins. Pretty much every time you look in The Binder you wish you’d left it well enough alone. I think I’m going to buy him one with a lock on it for his World Series gift.

A-Rod was finally back in the lineup. I knew this because I saw his name penciled into the lineup card, hitting fourth, and because of the WELCOME BACK, ALEX!!! banner stretched across our visitors’ clubhouse before the game, and also because of the gold-inlaid, monogrammed “AR13” fountain pens placed on the chair in front of each locker.

“Looks like someone’s happy I’m back in the lineup, Jetes.”
“You bought all of this yourself, Alex.”
“I don’t know why you’d say something like that.”
“Let’s just go out there and win today, OK?”
“Do you not want your pen, Jetes? I’ll give it to someone who does.”
“I have to go take some grounders.”
“Suit yourself.”

He hands my pen to Ichiro, who carefully places it on the floor, tips his cap, and walks in the other direction.

“Ichiro’s happy I’m back. Everyone is.”

A-Rod goes 1-for-4 with a seeing-eye single. Things do not go well for David Robertson. Or for anyone, really. The WELCOME BACK, ALEX!!! banner, however, remains in high spirits.

Freddy Garcia gave it his best shot. That’s all you can really ask for. Sometimes, a guy’s 110-percent-effort fastball winds up going 110 feet over the wall. You hope not three times, but that’s just baseball some nights.

Afterward, I drive out to my place in Tampa. Even following a tough game like this one, it’s nice to be home. I spend a quiet hour sitting in the Positivity Room, where inspirational quotes from my favorite thinkers (Jesus, the Buddha, Yogi Berra, etc) are projected onto the walls, as is the number of games remaining in the season. “It ain’t over till it’s over” flashes on the east wall, “27 games to go” on the west. And then, just as I’m about to drift off, it appears in front of me: “It gets late early out here.”

The machine’s not supposed to rotate that one in for another three weeks.

Must be broken. I’ll get it looked at tomorrow. There’s still plenty of time.