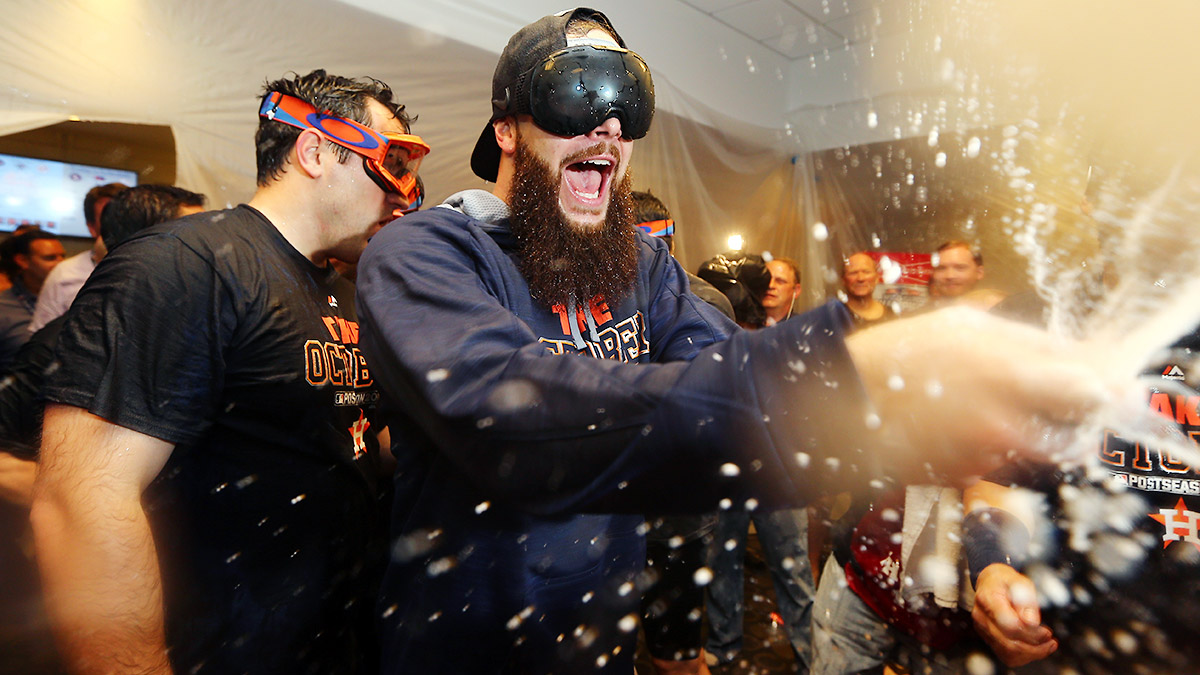 From 2005 to 2010, Astros lefty Wandy Rodriguez recorded a 3.46 ERA in 89 games at home and a 5.03 ERA in 87 games on the road. His road trouble — maybe a mental block, maybe something about ballparks, maybe Jobu — was a well-known phenomenon. Beat writers asked him about it. I wrote about it. Fantasy experts recommended sitting or starting him depending on where he pitched. No one could pinpoint the problem.

There probably wasn’t one. But there was a solution, and it was the same as the fix for most extreme splits: Give it time and wait for the weirdness to stop. Since 2011, Rodriguez has a 3.98 ERA in 49 games at home and a 3.95 ERA in 50 games on the road.

I remembered Rodriguez — who threw a hidden perfect game in two road outings earlier this year — before first pitch in Tuesday’s Astros-Yankees wild-card game, which the Astros won 3-0, and which starred another Astros lefty with an unusually large split: Dallas Keuchel. As seemingly every preview noted, Keuchel entered the evening with a 1.46 ERA at Minute Maid Park and a combined 3.77 ERA (with more home runs allowed and fewer strikeouts induced) elsewhere in 2015. His splits mirrored those of the Astros, who finished with a .654 winning percentage in Houston and a .407 mark on the road.

Historically, financially, and demographically speaking, the game was a mismatch in New York’s favor: 27 titles vs. zero, the second-highest payroll vs. the second-smallest, the most wins over the past 10 seasons vs. the fewest, and the oldest lineup vs. the youngest, featuring a 17-year gap between Carloses alone. But more importantly, it wound up being a mismatch between the Astros’ ace, even on the road and on short rest, and the Yankees’ bats: Keuchel vs. a lineup heavy with left-handers, whom he held to a .177/.201/.260 line during the regular season.

Yankees manager Joe Girardi, who must have looked longingly at switch-hitter Mark Teixeira as the hobbled first baseman made a pregame cameo on crutches, tried to rectify his roster’s glaring flaw, inserting two non-A-Rod right-handers into a lineup that had the highest percentage of plate appearances by left-handed hitters this year (68.6 percent). Rob Refsnyder started at second and lefty-killer Chris Young started in left, leaving Girardi with an unenviable choice in center between Brett Gardner and Jacoby Ellsbury, who spent the season’s second half in an intense head-to-head slump-off.

No managerial move could’ve altered the outcome: The sheen of sweat visible on Keuchel’s brow as he warmed up in the pen signified nothing except honest exertion, and he cruised from his called-looking leadoff. The lefty held New York scoreless for six innings on one walk, three hits, and seven strikeouts, dominating the series the way an ace can only if he’s Madison Bumgarner or the series ends after nine innings. Keuchel won the way he always does, staying away from the center of the plate and coaxing called strikes and soft contact.

If Keuchel benefited from strikes that fell outside the zone’s malleable borders — and he did, though most of the calls were far from egregious — it wasn’t an aberration that can be blamed on one ump. Keuchel’s command is the best in baseball, and the combination of his edge-expanding locations and Jason Castro’s strong receiving has yielded extra strikes all season, less a sin specific to Eric Cooper than one endemic among umpires. Keuchel threw rulebook strikes less often this year than all but two other starters, and the Yankees chased rulebook balls less often than any other team. But respecting the rulebook is only so useful against a pitcher who routinely rewrites it.

Keuchel led the league in command this season, hitting the catcher's target 33% of the time (26% league avg). @Astros

We can count the Yankees’ hard-hit balls on Tuesday on one hand: a would-be double that Alex Rodriguez stung and George Springer stole in the fourth, a Refsnyder fly to end the fifth, and Carlos Beltran’s single in the sixth. The Yankees looked old and tired, and while it’s easy for any team to appear old and tired against Keuchel, Girardi didn’t deny it was so. “Physically it’s not a very healthy group in there right now,” he said in his postgame presser. Like starting pitcher Masahiro Tanaka’s partially torn elbow ligament, the Yankees hung on until October, which was longer than expected. But they had little left once they were there.

Girardi doesn’t deserve any blame for Tuesday’s shutout loss. He followed a sensible script, using Tanaka for five, Justin Wilson for the sixth, and Dellin Betances and Andrew Miller for the final two and two-thirds. Tanaka looked sharp in the first, pulling off a rare feat by fanning the strikeout-averse Jose Altuve on a cutter away, but he looked fuzzy on the first pitch of the second inning, a center-cut four-seamer that Colby Rasmus drilled out to right, extending his recent homer barrage. Tanaka’s fastball is the bumbling sidekick to his splitter, a flat pitch that gets punished but has to be used to set up his off-speed pitches. Continuing a late-season trend, he stayed away from his hard stuff last night, but the Astros still did damage with aggressiveness early in counts. When Carlos Gomez — playing through an intercostal strain that hurts him when he swings — added another solo shot on an elevated, non-spinning slider in the fourth (another first pitch), the game seemed so iced that Brian McCann didn’t bother blocking the plate. “It’s just location,” Girardi said, citing Tanaka’s misses to Rasmus and Gomez. Location, whether in the strike zone or in a ballpark other than Minute Maid, was the last of Keuchel’s concerns.

The Yankees’ greatest threat came with two out and two on in the sixth, with A-Rod due up as the go-ahead run and Keuchel on his third trip through the order. Astros manager A.J. Hinch made a mound trip to “check [Keuchel’s] heartbeat” and “look in his eyes a little bit,” but he never intended to take out his ace. Rodriguez, who’d praised Keuchel in the same sentence as Zack Greinke, Clayton Kershaw, and David Price before the game1 — try telling that to a time traveler from two years ago — had jumped on a first pitch in the fourth, and Keuchel thought he might ambush Rodriguez again. “I knew if I could elevate it or get it middle in, I had a good shot to just have him pop it up,” Keuchel said. He threw an 87 mph cutter over the middle, a pitch A-Rod could have clobbered on a different day. Tuesday, he swung as Keuchel foresaw, but he missed the sweet spot, lifting an easy fly to center that ended both Keuchel’s outing and the Yankees’ last real rally. Keuchel, who pitched 22 innings against the Yankees this year without allowing a run, became the first pitcher to make a scoreless start in the postseason on three days’ rest since Josh Beckett did it to eliminate the Yankees in 2003. And the Astros became the first team in 2015 to shut out the Yankees on five or fewer baserunners, which had happened to every team except New York before last night.

Across the board, the Astros followed the formula that was just good enough to get them to the game. Keuchel pitched like the Cy Young Award winner he’ll probably be, and the Astros offense did what it does, striking out in 26 percent of its plate appearances but compensating with long balls plus a tack-on run from a walk, steal, and Altuve single in the seventh. While broadcasters blamed the Yankees’ lack of scoring on their reliance on homers (a myth that won’t go away), the Astros — one of two teams that scored a higher percentage of their regular-season runs on dingers — made the all-or-nothing method work. The Astros’ victory could’ve been even more convincing had Tanaka not gotten a great catch by Gardner on an Evan Gattis fly ball after the Rasmus bomb, a bases-loaded grounder on a hittable second-inning sinker to Altuve, and a ground ball double play in the fourth. Both teams played crisp defense, highlighted by Springer’s snag, a barehanded grab by Chase Headley to escape the third, and what almost became a beautiful Carlos Correa–Altuve double play with one out in the sixth.

The Yankees’ death rattle lasted just long enough for the Bronx not-so-faithful — bloodthirsty enough that they booed the universally beloved Altuve when his name was announced — to turn on their own, switching from delirious love before A-Rod’s first at-bat to boos after his ninth-inning K. The second that Astros closer Luke Gregerson completed a one-two-three ninth inning, the crowd cleared out quickly.

At least a half-hour later, with the corks popped and the giddy interviews given, the Astros returned to the mound en masse to mark their territory. They wore goggles and yellow champagne-protection towels; Rasmus, as usual, wasn’t wearing a shirt. They posed for group pictures, thoughts of an ALDS against the Royals still some hours away. Their laughter carried up to the famous white frieze.

When young teams lose, we decide they lacked the experience to succeed under pressure. When they win, we decide they must not have known enough to feel the weight of everyone’s eyes. But at the moment, almost no one was watching. As the cleanup crews prepared the stands for events like NYCFC soccer, the Astros ran the bases, roaming the infield as if they owned it. For the one night that they’d needed to, they had.