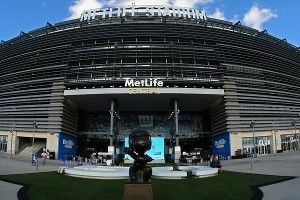 You don’t have to like the Giants or the Cowboys to get excited about seeing them open the NFL season. Come on, it’s football. I’m sure after Prohibition, even the crappy booze tasted good.

But when it comes to attending live sporting events I keep changing my mind, going back and forth between “Yes, I totally need to be there for the full experience. It’s totally worth it” and “What a nightmare. This whole experience is one long ad for the greatness that is HDTV.”

On Wednesday I went with the former but ended the night possibly permanently in the latter. Well, at least for NFL games. Actually, NFL games at MetLife Stadium.

And no, it’s not because I don’t like the Giants; I’m not a Yankees fan, either, but I have nothing but nicey-nice to say about their new stadium. It wasn’t because I was scarred by seeing Queen Latifah sing the national anthem while wearing the same bedazzled Giants jersey that Jon Bon Jovi unfortunately chooses to wear in concert. And it wasn’t because of the game itself, in which the Giants and Cowboys took turns saying, “No, sir. I insist, you win,” “Absolutely not! As a gentleman, it is only right that you should be the one to win” (I’m sorry for that last part; I’ve been watching Downton Abbey lately).

The main reason(s) I don’t want to go back there is for the unfortunate camaraderie I had with Giants and Cowboys fans alike. A camaraderie built from one phrase we kept saying to each other all night:

• The roads leading to the stadium could be better than the ones that caused the same traffic nightmares for people going to games in the ’70s. At this point I’m fairly confident that HDTV manufacturers spend their lobbying money ensuring that roads surrounding all sporting arenas are never maintained or improved, thus making their product more attractive with every car that tries to sneak into your lane after you’ve been inching along for 45 minutes. Just like I’m fairly confident that Michael Strahan only took the job with Kelly Ripa as an enormous “eff you” to Tiki Barber’s failed TV career.

• They could figure out how people could park. Do you have season tickets? Great! You get a pass (along with the esteemed right to pay for a PSL). Actually, you get the right to buy a parking pass for the season, or you can buy one on the NFL Ticket Exchange — something most people find out after they get to the game. If you don’t have a pass, you need to go to “satellite parking,” which, according to this always-handy PDF, means you need to leave where the stadium is, get back on the highway, take a different exit, yadda yadda yadda … and “staff will direct you to satellite parking.” That sounds great, except that it doesn’t happen. What happens is there are a couple signs, but then there aren’t — and then you need to hope that you find it by accident. For those of you who paid several hundred collective dollars for your tickets, it’s not really an adventure to look forward to. Oh, and that right to park behind some dark warehouse in an office complex will cost you $35.

• Once you do park on the satellite lots, that they could find a better way of getting you to the stadium than an old-school yellow school bus meant for people no taller than 5-foot-2.

• The Giants wouldn’t need to steal the pumped-in crowd noise soundtrack from the Nets and their sad days playing in an empty Izod Center next door. On any key play (usually a third down), the scoreboards would feature one of the Giants saying “Get up!” to get the crowd going. That’s great, but accompanying this with what was clearly fake crowd noise is pretty embarrassing for the defending Super Bowl champions, not to mention a storied franchise in the no. 1 media market.

• For the non–”Get up!”-and-make-some-noise plays, that the Giants could find another graphic to put on their scoreboard than “Quiet! Offense at work.” For this game I would have settled on a camera constantly on Dallas defensive coordinator Rob Ryan. How amped would fans get with a quiz like “What will Rob eat next? (a) Hot dog, (b) Chicken fingers, (c) His playbook, (d) Section 335”?

• The people wearing the “Alcohol Enforcement” shirts would stop people from getting as wasted as they did. I say this not as some nitpicking teetotaler, but as someone who missed getting puked on (yes, actually puked on) by a dude two rows behind us who had a blood alcohol level of what current technology would most likely calculate as infinity. My brother and father-in-law weren’t so lucky. If they had to sum up their experience in one word, I think it would be “chunky.”

• If someone did in fact puke all over a bunch of fans (to get this point across, let’s call them people who paid lots of money for tickets) that you would eventually see someone, anyone who actually works there. We didn’t. Mr. Puker stood up for about 15 whole minutes, swaying back and forth, until a friend escorted him out after one puked-on fan got restless, and by that I mean he smacked him in the face. When we finally found someone from what I assume is the SEAL Team Six wing of the Alcohol Enforcement squad they told us, “Oh, I heard about that … yeah, that guy just left.” I wish I just made that up.

• Now that they are in their third season in that place, they could figure out a way for people to stop constantly saying, “You would think for $1.6 billion that … “

Filed Under: Dallas Cowboys, New York Giants, We Went there

Oscar Pistorius Stars in Blade Runner 2: This Time It's Personal