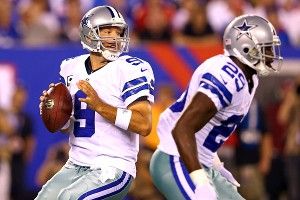 Quarterback intangibles are mostly discussed in stark terms. Tom Brady “has great intangibles.” Kevin Kolb does not. There isn’t much middle ground, and in Tony Romo’s case, those absolutes have often muddled whatever our understanding of him would be.

There’s no doubt that Romo has come up short in many of his biggest moments, but then again, there was a long time where that was Peyton Manning’s problem as well. The difference is that Romo isn’t spending 10 seconds waving his arms at the line of scrimmage every play, and he isn’t shooing the punt team off the field in playoff games. He’s never thrown the type of sideline tirade Tom Brady did against Pittsburgh two seasons ago. The “Aw, shucks” postgame routine and the backwards hat and the smile make people wonder about Romo in a way that they don’t about the quarterbacks who are considered elite. The problem is that the elements that make up whatever “it” is can be mutually exclusive. There’s a way to thrive as a quarterback without being celebrated as a “leader” or “winner.” It’s with the subtleties, and it’s the way Romo showed last night and has been showing for years.

From the time he became Dallas’s starter in 2006, Romo’s success, when it comes, has been predicated on feel. I remember watching him play the Bears in Week 3 of the 2007 season, less than a year into his tenure as a starter, and thinking about how frustrating it has to be to chase him around. Ben Roethlisberger gets a lot of credit for extending plays, but I’m not sure anyone manipulates the pocket as well as Romo does. Often, it’s not moving it completely, but a step here or a shuffle there. On several occasions last night, untouched defenders tore into the Cowboys’ backfield and came away with nothing but air.

Aside from Kevin Ogletree, the Cowboys’ offense last night was mostly as expected. Dez Bryant looked healthy, DeMarco Murray looked excellent, and the new-look offensive line had its share of issues. The last part didn’t matter much, and that’s a credit to Romo.

Many of the plays that stood out from last night are the ones that would — the touchdowns, the game-sealing slant to Ogletree. Never was Romo’s command of his offense and its game plan more evident than on his second and third touchdown passes. Both saw Romo come to the line, pause, motion to an outside receiver, and hit that same receiver on a double move for a touchdown. The one to Ogletree looked particularly easy, thanks in part to the receiver leaving Corey Webster about five yards in his wake.

The one I noticed came early in the fourth quarter, with Dallas up 17-10. On second and 5, Romo dropped back and looked to float a swing pass to Murray on the right side. Seeing a linebacker closing, Romo turned his eyes upfield, where Miles Austin had come free and was moving toward the right sideline about 20 yards from the line of scrimmage. Austin had to stretch a bit, but still managed to come down with it for a first down.

It was the type of play that looks easy when Romo does it, and the type of play that leads to the criticism he’s gotten for so long. He looks so comfortable back there that, at times, it feels like he might be too comfortable. The position comes so easily to him that when he struggles, it’s hard to understand why. Detractors point to some nebulous notion of quarterback demeanor that he appears to lack. The truth is that if Romo and the Cowboys are going to get over the hump, it won’t be in spite of the hard-to-define elements Romo brings to the position. It will be because of them.