Notes From Roland Garros, Pt. 4: The Threat of Terror and the French Open 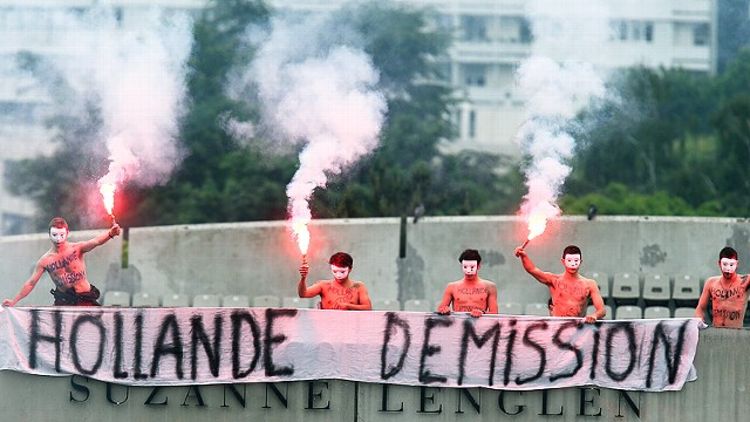 So there we all were, seated in Court Philippe Chatrier, already in a mild state of alert. Would David Ferrer figure out a way to mount a real challenge to Rafael Nadal, after losing to him 16 consecutive times on clay? Would the overcast sky have mercy on the afternoon and keep the rain to itself? Would Nadal be penalized yet again for the duration of his baseball-pitch-signal service-line ritual? The concern about Ferrer was answered decisively enough when he managed to break Nadal early in the first set only to lose his advantage and then the set. It was more of the same in the second. But Ferrer is a fighter, and in the fifth game he fought. The result was a splendid 29-stroke rally that ended with Nadal being drawn to the net and hitting a winner and the crowd erupting with cheers.

This is important to mention for two reasons. The first is that it was a spectacular and aggressive point. It ended with both men moaning and grunting as if every shot were a 400-pound bench press. When it was over, Ferrer did some pacing at the back of the court, then stood at the service line to receive from Nadal. He was still panting. Nadal performed his ball-bouncing, pants-tugging, brow-wiping ritual with no apparent loss of breath. The other reason to mention that point is that it was all downhill from there. Ferrer put his next return into the net and proceeded to lose the next four points.

But with Nadal serving for the set, a noise arose from the tippy-top of the stadium. Two banners, in blue, white, and red, were being waved, one in French, the other in English. Without looking up, it was natural to assume that these were just fans who’d missed the deadline for shutting up before a player serves. But their shouts of protest complemented their banners: “Help! France tramples on children’s rights.” They were young, well-dressed (scarves, leather jackets, nice glasses), and went on for an uncomfortably long time. Before security could get to them, some spectators had taken it upon themselves to try to quell the noise — one going so far as to snatch one of the banners and toss it over the stadium wall in a comical fit of aggravation.

Two of the protesters were escorted out to the sound of jeers. Amazingly, their mates took their seats, endured some minor harassment from their neighbors, and watched as play resumed. It’s inconceivable that, after disrupting the world’s biggest clay-court tennis tournament with a political protest, they could sit there and continue to be spectators. But that’s just what they did. Ferrer failed to hold his serve. Shortly thereafter, there was another shout, this time from behind the players’ chairs, and onto the court leaped a shirtless man (torse nu in French) with a lit flare, a white plastic mask, and the words “kids right” Sharpied, wrong, across his abdomen.

I was seated almost longitudinally with him, and the first thing I saw and heard were the sound of the flare’s sizzle and the rose-red of its glow (it sounds outrageous, but the glow matched Nadal’s shorts). He and the flare seemed headed toward Nadal, who looked alarmed and backed away, but the protester was immediately tackled by one of the suited security officers stationed nearby. He was hustled off-court along with his clothes, which he held on to with the grip of an NFL receiver. After tremendous effort by a half-dozen or so officers, the smoking flare was extinguished. Assuming the events were connected and that maybe there was more to come, a lot of us turned our attention up to the scene of the initial outburst and the other two banner-wavers. So did the security team. They removed them from the stands with little resistance. Play resumed — awkwardly — and Nadal lost his serve.

During the changeover, there was stunned disbelief and possibly a little fear in the stands. The normal between-sets bustle was virtually gone. Who knew what the third set might hold? (Besides intermittent rain.) For the rest of the afternoon, there was the match, and there was the tension. At some point, Ferrer stepped away and turned to look into the stands. But it was a false alarm. Not much later, the match was over, the stadium was on its feet, and, for the eighth time in nine years, Nadal was collapsed on the clay.

Whenever the rumblings of the outside world make it onto the grounds of a major tennis facility, you’re forced to think about life beyond sport. There was talk of a similar, simultaneous disruption at what should have been an empty Court Suzanne Lenglen, and, indeed, five or so more of the young and the shirtless, with masks and flares and Sharpie tattoos, had made it to the top of the stands and hung a banner calling for the resignation of France’s president, François Hollande, because last month he signed a same-sex marriage bill into law. It seemed that the country’s gay-marriage and gay-adoption debates had entered Roland Garros, and these kids were part of the right-wing movement against it. The decision to legalize gay marriage has been extremely divisive here in ways that can induce cognitive dissonance.

One evening a week ago I saw scores of people, many of whom would be called hipsters and prepsters in the U.S., marching with megaphones and flares and air guns along with people old enough to be their parents. They snaked around the 6th Arrondissement, where the French Senate is. Police lined the streets and stood outside government buildings. Some of the protesters wore T-shirts and hoodies showing the silhouette of one male and one female holding the hand of a child. They walked with signs that said, provocatively, “Don’t touch our kids!” and sang anti-Hollande songs. (“François, your law: We don’t want it!”)

What we call gay marriage in the States is “marriage for all” in France. It’s a phrasing that paints those against the law as being, by default, “marriage for some.” But the anti–gay marriage folks, seeming to have anticipated rhetorical entrapment, march for the cause of “demonstrations for all.” They do so in a way that combines the spirit of the student revolts in spring of 1968, the iconography of the gay-rights movement — and, it must be said, a queer blend of militancy, street theater, and Hollywood dystopia. In any case, they’re a force. A protest march in Paris three months ago drew somewhere between 300,000 and 1.4 million people, depending on whether you believe the police or the organizers. On Sunday some of those people found their way into Roland Garros. As much as some of us wanted to ignore them, there they were, robbing an international stage from two men who worked absurdly hard to reach it.

Roland Garros is not a place one feels unsafe. The grounds teem with large, tough-looking men in black suits and earpieces. They’re serious. They sit courtside at every match. But sometimes people slip through the cracks. Today, for the first time in two weeks, I entered the grounds without having my bag inspected, and not much later after that incident with the flare I wondered who else’s bag went unsearched. It’s unclear what the guy with the flare intended to do with even momentary free reign on the court. But as soon as he made his attempt and was sacked, a different officer put himself between Nadal and the commotion. When it had more or less passed (the fumes of the smoking flare lingered at the entrance to the player’s quarters), he motioned to Nadal that it was safe, and Nadal called after him and shook his hand.

The tension had dissipated into disappointment for Ferrer and happy relief for Nadal, who, like Serena Williams on Saturday, giddily posed with the grounds crew and ball kids and sat on the court for news photographers and made Sears Portrait Studio poses with his trophy. If there was any doubt that the banners and the flares were just blips on the afternoon, when Nadal removed his shirt he did so amid extended catcalls and whistles, which is what happened whenever Nadal went torse nu at these championships. Very little can upstage a shirtless Nadal, not even the unanticipated half-naked bodies of other people.

This post has been updated to correct a timeline error.

An American in Paris: Serena Williams's Dominance of Maria Sharapova and the French Open