An American in Paris: Serena Williams’s Dominance of Maria Sharapova and the French Open 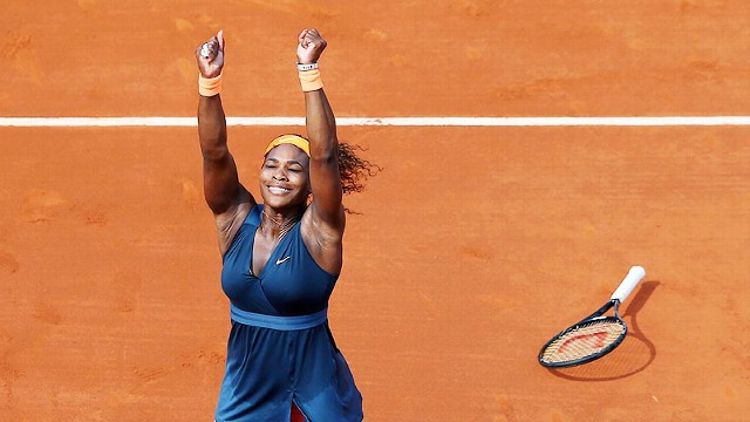 Up a set in the women’s final at Roland Garros, at 0-1 in the second, Serena Williams hit a hard serve down the T. Maria Sharapova whaled a backhand deep into the corner, the kind of return that only one of the best returners in the game can hit, the kind of return that would force an error or be an outright winner against most players. Serena lunged to her right and hit a half-volley from the baseline, swinging her racket up over her back, which was nearly parallel to the court. She looked like a sprinter exploding from the blocks — except that with her second step she skidded to a halt and changed directions, her navy skirt flying, her orange shorts beaming against the terre battue. She floated to the center of the baseline, somehow skimming the surface as lightly as the blown clay despite her strong build. She hit a standard, crushing forehand, her feet kicking slightly from right to left, and then another forehand, this time pulling Sharapova off the court — always a weak position for Maria — and forcing her to block back a backhand on the run, drawing a short ball. Williams closed toward the net and hit a bad drop shot. The ball sat up and Sharapova knocked a passing shot down the line — except that Serena was there for the volley. She flicked a lob that flew high over Sharapova and landed just inside the baseline. The crowd gasped and roared. Serena barely acknowledged the winner. I’ll bet she was thinking about that drop shot.

The question going into the women’s final at Roland Garros was whether Serena would humiliate the defending champion, the second-ranked player in the world, or merely beat her badly. Sharapova hadn’t won against Williams since 2004 and had taken only one set off her since 2008 — and after that one set, she’d lost the third 6-0. In the gold-medal game at the Olympics, Serena had beaten Sharapova 6-0, 6-1. Meanwhile, Williams had won a career-best 30 matches in a row and was 73-3 since losing in the first round last year. In the semis, Serena had beaten Sara Errani 6-0, 6-1 in about five minutes, while the CEO of Sugarpova had survived gritty three-setters in the previous two rounds. So the smart bet was on a rout.

Since the match ended up being surprisingly close, 6-4, 6-4, there was talk of moral victories and progress, and of Maria showing once again that underneath her Sugarpova exterior, she has a dogged resolve. Down 0-40 in the first game of the match, Sharapova hit a gutsy, deep second serve, then another, then an ace. She kept her groundstrokes deep and scrambled intensely. She broke up her predictable serving pattern, even if the double faults still piled up. She played a few splendid points and many solid ones. It was her best match of the tournament, even better than her semifinal defeat of Victoria Azarenka, who now replaces her in the rankings as no. 2.

But Sharapova matches up very badly with Williams, worse than some of the other top players do. Sharapova’s returning ability, her fast, flat groundstrokes, and her determination — her few but overwhelming strengths — are neutralized against Serena’s serving, power, defense, and desire. Don’t get me wrong. It’s remarkable to see someone who is a more limited player, both in skill and athleticism, fight and rage for every point. Still, the result was never in doubt. Even when Sharapova was up a break in the first set, I had the sense that I was watching a lion fight a nasty giraffe.

Serena has no rival. It’s a truism by now. After the match, the response was satisfied but dull. Everyone acknowledged Serena’s greatness and her dominance, but the stories had been half-written in advance. What else was there to say? The contrast with what had happened the day before, when Djokovic played Nadal, was striking. Then, there had been urgency, e-mails and tweets and texts telling people to turn on the TV and watch. This happens three or four times a year: Two of the top four men will play five sets, and Americans — not just casual fans, but people who watch all the time — will suddenly discover tennis as if for the first time. They’ll see something they expect, and they’ll still be surprised.

That didn’t happen when Nadal played David Ferrer, all due respect to Ferrer. And it didn’t happen when Serena played Maria, all due respect to Sharapova. That’s the danger. I wonder if Serena’s greatness, for all the press it gets, is actually taken for granted. It’s not really tested, debated, scrutinized, or comparable, except to players who are fading or gone. Since it’s a foregone conclusion, there seems to be less of a general public sense that something’s at stake. Women’s tennis has lots of competitive, compelling characters. But even on the rare occasions when Serena loses, the gulf between her and those other players remains wide.

The funny thing is, I wonder if the best way to watch Serena now would be to watch only Serena. Some of my favorite moments during the women’s final came when replays kept the cameras trained only on Williams’s reactions, not the ball, so that all you could see was how she moved — her intensity and poise, her quickness and patience, her power and touch, her defense and aggression. She almost cartwheeled across the clay. She was always at once perfectly balanced and about to fall. It’s fitting that she ended the match with aces, the one point that an opponent doesn’t touch. “I thought, I’m not going to be able to hit groundstrokes,” she said. “No joke. I really thought — and as you see the one groundstroke I did hit went like 100 feet out. I thought to myself, Look, Serena, you’ve just got to hit aces. That’s your only choice. I just had to hit aces.”

Serena actually has a rival. It just happens to be herself. The troubles she has had at Roland Garros in the past — the absences from injuries, the first-round loss last year, the hostile crowd, the Justine Henin controversy in 2003, the 11-year gap between French Open titles — are well known. So is the story of how she’s come to embrace Paris. She has an apartment there, and a coach/man. She is learning French. In her victory speech, delivered in French, she said she felt Parisian. It’s clear from the way she gives interviews and holds herself that she has grown up, found some peace, made a kind of home. I wonder if it’s an accident that she’s done it in this city where she’s been booed and where she’s lost. She’s an American in Paris, not the first to fall in love. Yet it may also be a sign that she’s still challenging herself.

“I want to go out in my peak,” she said after the match. “That’s my goal. But have I peaked yet?” The crowd likes the well-fought point. She’ll push herself for the perfect drop shot.

Notes From Roland Garros, Pt. 4: The Threat of Terror and the French Open