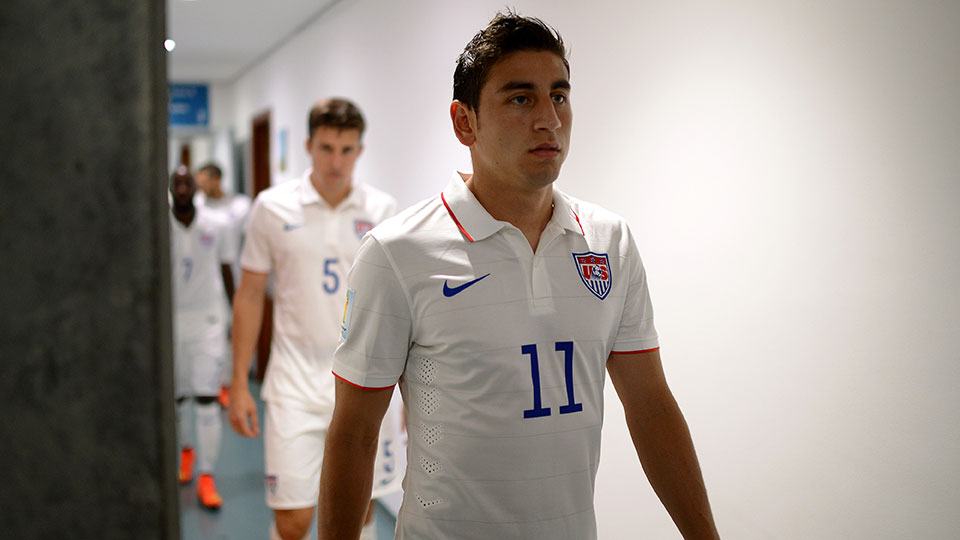 Alejandro Bedoya sounds tired. The previous afternoon, the 27-year-old Englewood, New Jersey, native played 120 minutes in FC Nantes’s comeback victory over Metz in France’s Coupe de la Ligue — one of those “typical crazy Cup games,” he tells me via Skype. He’s been starting consistently for his club squad, scoring lasers against Paris Saint-Germain and earning player of the month honors, while also solidifying a starting (and starring) role with the United States men’s national team. The Americans didn’t win any of their final four friendlies in 2014, but Bedoya’s continually improving play1 was one of the few bright spots for Jürgen Klinsmann’s evolving side.

In other words, the dude has been busy. At a time when many Americans are returning from Europe to play in Major League Soccer, drawing the ire of Klinsmann for doing so, Bedoya has taken a different path.

From the beginning, Bedoya wasn’t interested in MLS. The wide midfielder, whose father and grandfather played professionally in Colombia, spent two seasons at Fairleigh Dickinson before transferring to Boston College and lighting up ACC competition in 2007 and 2008. That success provided a platform for his ultimate goal: playing in Europe. “My best friend, Charlie Davies [who attended BC between 2004 and 2006], kind of set the precedent for coming to Sweden. He told me all about his experiences,” Bedoya says. “At that time, Sweden was the better option. It’s in continental Europe. It’s easier for teams to scout. The time difference isn’t a problem. It made more sense — as a soccer player trying to make it into the bigger leagues — to go to Sweden.”

Bedoya joined Örebro in 2009, making his debut 23 days before his 22nd birthday. He thinks his advanced age2 helped him deal with issues like homesickness that sometimes plague younger Americans when they go abroad, but he also felt behind in terms of his soccer development. Bedoya sees the development infrastructure improving in the U.S., but it’s slow progress: “MLS has closed the gap, but these leagues are very tactical. I learned a lot from my time in Sweden.”

Three seasons at Örebro saw his profile rise, which prompted a move to Scottish giant Rangers, where he joined fellow American Maurice Edu. Financial concerns, however, plagued the club3 and Bedoya moved back to Sweden for a stint with Helsingborgs, where he scored against Hannover 96 and FC Twente during the team’s 2012 Europa League campaign. Meanwhile, despite not appearing for the U.S. at all in 2012, Bedoya made the most of Klinsmann expanding his pool for the 2013 Gold Cup. He started three matches, including the semifinal and final, and picked up three assists, giving the team a direct — you might even call it European — outside-in threat from the wing. He joined Nantes following the continental championship, but more important, he had earned Klinsmann’s trust, getting the start in a crucial World Cup qualifier against Mexico, a dos a cero victory that clinched a spot in Brazil. Bedoya then appeared in the final five U.S. matches of 2013 and in every game in 2014 that mattered, including all four World Cup fixtures. If you were looking for a face of American soccer, you wouldn’t be wrong to choose Bedoya’s.

Bedoya’s career highlights a couple of factors about the state of American soccer. One is that a player from the United States can succeed in Europe following a stint in college. For all the understandable and necessary talk about development academies and the inability of the current system to produce world-class players, Bedoya’s path is another option. When I talk to young Americans about playing in Europe, they almost always say the hardest part is the 22 hours a day when they’re not playing. Soccer makes sense; living alone in a cold, dark, foreign country when you’re 18, fighting for time on a team where you may or may not be able to understand the coach, often doesn’t. While there’s no way to know where Bedoya would have ended up had he tried to go to Europe at 18, it’s instructive to see him spend four years in the U.S. college system and eventually find a home in France. Maybe the system isn’t perfect, but you can still make it work.

If you’re looking for the thing that drew Klinsmann’s eye, it was likely Bedoya’s refusal to return to the U.S. Bedoya isn’t in the best league in the world, but he’s working his way up, slowly and steadily. It’s not dissimilar to the path Michael Bradley took until, well, you know. And it’s a lesson for the younger players out there, in addition to a guy like Bedoya’s good friend Jozy Altidore, struggling away at Sunderland.

I asked Bedoya, who said he talked to Davies only before his move to Sweden, if he gives advice to the next generation of Americans. “I get messages from guys on social media, asking what it’s like to go to Sweden or Denmark. I try to help out. I try to give them my advice,” he says. “In the Swedish and Danish leagues, you learn a lot and grow a lot as a player. You have to mature a lot sooner than other players would like to maybe — living on your own, meeting people. You have to deal with other egos and people.” It’s a different world, where promotion and relegation raise the stakes of every minute of every match and the unending string of talent coming into training sessions and a never-ending coaching carousel means it’s a constant battle against upheaval. MLS improves yearly, but the teams don’t yet have the depth and competition for places to compare with the European leagues where a young American would find himself, nor do they force a player to confront the extant stigma of being from the U.S.

Today, Bedoya’s in a position with the U.S. team that would’ve been hard to envision three years ago. Six years ago, it would’ve been impossible. Yet we now live in a world where Alejandro Bedoya is one of the best American players alive. And his coach seems pleased with the progress of a player who embodies the type of bullheadedness he so desperately wants. “In Prague [Klinsmann] sat down with a lot of the players individually. They are always open to one-on-one conversations. They want it to be as honest as possible. They are really straightforward. They tell you what they like,” Bedoya says, continuing on about the importance of playing every day, extra training, and showing the desire to improve.

Bedoya pauses briefly, catching his breath: “I know they are satisfied with the situation I’m in now.”