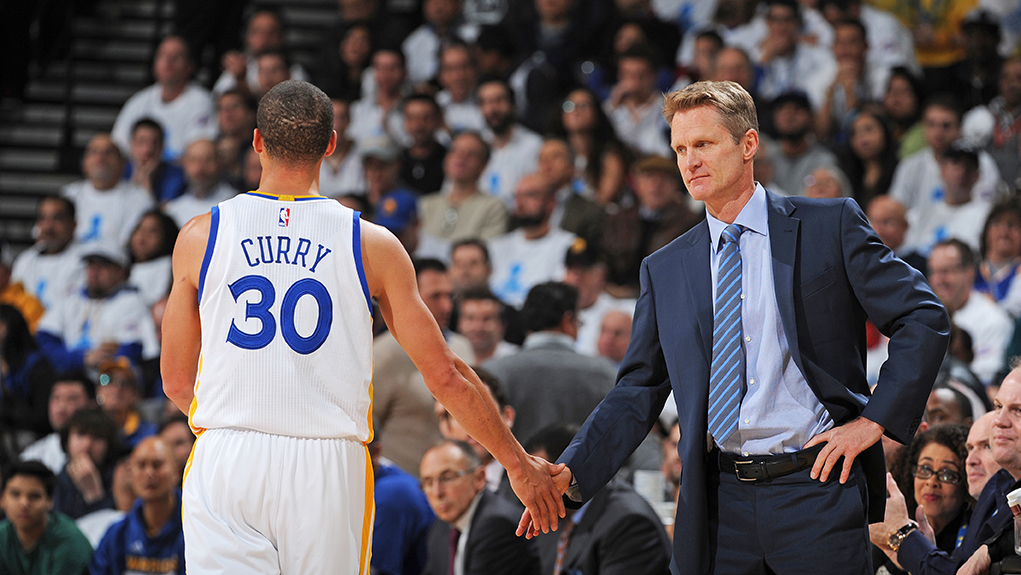 Kind of a lot happened yesterday. Here’s pretty much everything you need to know about from a crazy day in the NBA. Well, everything except for LARRY SANDERS! possibly quitting basketball.

Kirk Goldsberry: Steve Kerr has ruined the Warriors. Call me sentimental, but am I the only one who misses the days when the Warriors just couldn’t figure it out? You know, when they had cute little blemishes that prevented them from winning basketball games? Remember those halcyon days when Stephen Curry couldn’t finish at the rim? Well, Curry opened the game last night with these two drives:

Remember when they just didn’t know how to produce a sum greater than the value of their individual parts? That was awesome.

Remember when Draymond Green was a terrible shooter? Those were the days.

Nowadays, it just seems like they’re too cohesive, too effective, and too motivated on both ends of the court. When did this all happen? Who knows? But if last night is any indication, the good ol’ days are all gone. I blame Kerr.

The Warriors Ruined the Thunder

Danny Chau: Here’s a fun fact: Of the five worst shooting percentages accrued this season, the Thunder have been involved in four. Through three quarters against the best team in the league, the Oklahoma City Thunder shot 26 percent from the field. Had the game ended right then and there, at 84-65 — and let’s be real, it did — the Thunder would’ve had the fifth-worst single-game shooting performance of the last 10 years and landed just outside the bottom 10 of the last 20 years.

Still, we’re preconditioned to expect surging runs from OKC. With 10 minutes left in the game, the Thunder got some stops and easy baskets, cutting the lead to 15. It felt like something. Against any other team, perhaps it would’ve been. But all night the Warriors were an Iron Dome of repulsive force. Every single one of the Thunder’s rallies were deflected. Instead of getting 30 points in 18 minutes from Kevin Durant, the Thunder got even less than the inverse. For the first time in a long time, the Thunder, with both their stars on the court, looked hopeless. But I’m preconditioned to believe in impossibilities with this group. I’m more than ready to see this potential 1-8 matchup come April. I still think they’re capable of willing themselves through the seams of this immaculate defense. I’m not quite ready to believe the magic has run out. 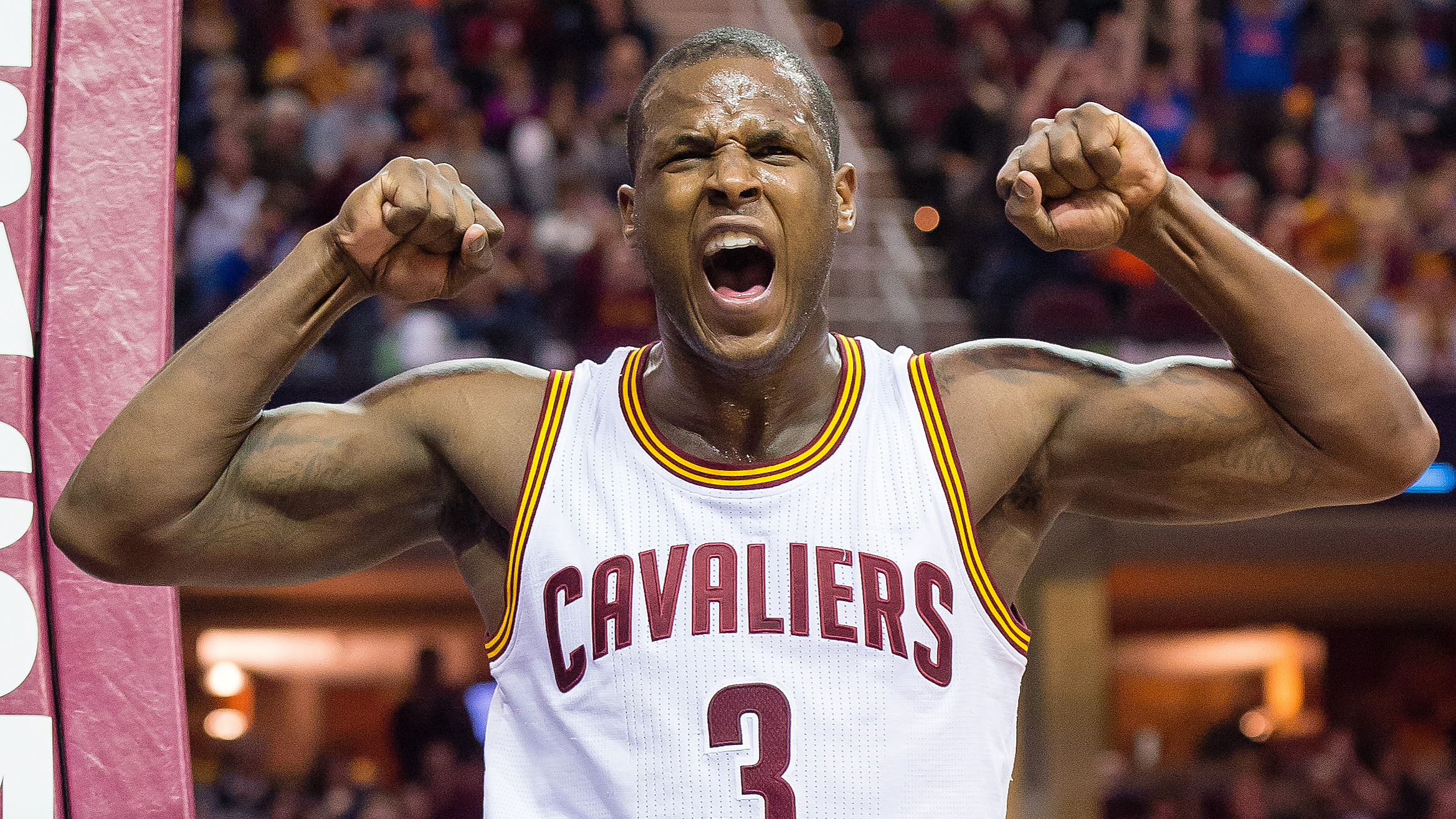 Andrew Sharp: It feels like just yesterday that Chris Grant shocked the world and took a shoot-first sixth man from Syracuse with a fucking top-five pick. This was followed by Cavs fans relentlessly defending that move for the next several years. I swear to god, I was arguing with Cavs fans about Beal vs. Waiters as recently as August. Now we’re here. It’s over in Cleveland, and last night I found myself getting a little nostalgic for the year of Dion. What will we remember? LeBron ignoring wide-open Dion. Dion ignoring wide-open LeBron. The Philly Cheese Shake. This shout-out from Meek Mill. And … this note?

Of course that quote. His time in Cleveland was finite, but those words are timeless. Men lie, women lie, and buckets do not. Also, I got to the end of this section and just remembered that Waiters allegedly broke Kyrie’s nose in a locker-room fight last year and then mysteriously disappeared for the following week. God, I wish he were still on the Cavs.

But now he’s on the Thunder. With OKC down 20 in last night’s fourth quarter, one of the Golden State announcers blurted out, “Maybe Dion Waiters will be the third scorer they’re looking for.” That quote is either the latest and meanest twist of the knife from the Harden trade, or hey, it could be true. Either way, time for more memories.

A Coming Attraction for the Finals?

Jason Concepcion: While you were watching Twitter melt under the white-hot glare of the Dion Waiters–J.R. Smith–Iman Shumpert trade, the Rockets were in Chicago playing an entertaining game of professional basketball that had numerous, as they say in the business, “intriguing subplots,” not to mention “marquee matchups,” as well as being “a possible Finals preview.”

Let’s take these in order:

• Since Josh Smith arrived in Houston after being waived by Detroit, the Rockets entered the Bulls game scuffling along at 3-3, while the Pistons are a 5-0 phoenix rising from the  ashes. All of which raises the question: Is Josh Smith the avatar of Satan given earthly form?

• Derrick Rose vs. Patrick Beverley: two Chicago guys. One was a former no. 1 pick and an offensive power blast. The other took the roundabout European land route to the NBA and managed to stick by being a defensive agitator/guy who players are concerned may injure them. Which brings me to:

• Derrick Rose’s knees vs. Patrick Beverley: With about six minutes to go in the third, Beverly fouled a streaking Rose from behind by basically diving into the back of his legs. Bulls color analyst Stacey King, described it  as an example of Beverley’s “murderous intentions.”

• Jimmy Butler vs. James Harden: Butler, a pair of handcuffs on defense, has broken out as a legit offensive threat this season. Harden put up 31 points, seven assists, and six rebounds in a month of December swaddled in sparkly MVP wrapping paper.

It was a great game; it was a weird game. The Rockets took 17 more shots than the Bulls, hit a healthy 46 percent of them, and led for most of the game, up until the final three minutes because — tl;dr version — the Bulls went to the line 30 times while the Rockets went only five times and three of those were Harden. Bulls 114, Rockets 105. Josh Smith is the devil.1 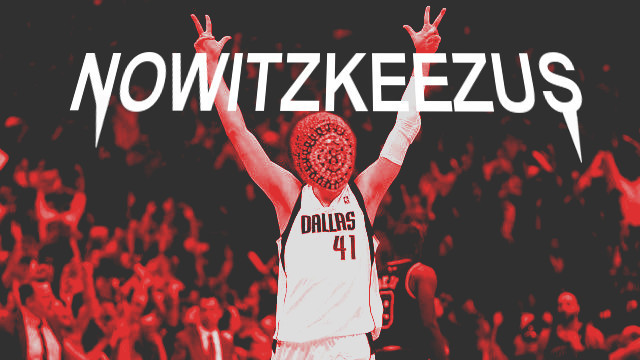 Jason Gallagher: Let’s talk about the Dirk Dagger for a minute. The New Testament defines it as …

“… sharper than any two-edged sword, piercing to the division of soul and of spirit, of joints and of marrow, and discerning the thoughts and intentions of the heart.” That’s Hebrews 4:12. It’s about Dirk. Or maybe it’s about the word of God. Solid description of both either way.

It’s fitting that Dirk passed Moses Malone with a rainbow 3. Malone was a 6-foot-10 hulk-like center who crushed defenders down low with a plethora of post moves. The idea that a 7-foot jump-shooting German kid would one day pass Malone using a patented 3-point dagger is too perfect. Oh! How the game has changed for the cooler.

Dirk has now killed generations of greats with his miraculous shooting; from T-Mac and KD to Nash’s Suns and LBJ’s Heat, they have all fallen victim to the holy one-legged fade. Last night Dirk put away yet another team with a 3-point dagger, but this one was special. It was aimed directly at the heart of Brooklyn but wound up piercing the soul of basketball history. This is just one of Dirk’s many, many reminders to appreciate him in the moment.

Sullinger: "we can't play hero ball. We have no heroes."

Fear and Losing (and Winning and Eating) in Philadelphia

Chris Ryan: Quick roundup of what went down in Philly last night. Dion Waiters, prodigal son, returned with the Cavs to his hometown, only to get yanked from the lineup when he found out he was traded to the Thunder. So things got off to a kind of weird start.

Joel Embiid did some light shooting. Except Joel Embiid is, like, not light?

#Sixers Embiid doing some standstill shooting. Has definitely put on a few. pic.twitter.com/wqlRl5haNB

I’m glad someone introduced Embiid to the remaining Butterscotch Krimpets in circulation. Sixers coach Brett Brown has developed quite the gallows humor since arriving in Philly. Here’s what he had to say about Embiid’s weight gain, via Tom Moore at The Intelligencer.

“The challenge is always going to be, physically, to make sure we get him streamlined and thin.” … Brown said he jokingly told Embiid they’re “going to rub our head on Hollis (Thompson’s) pillow at home and get going where we both need to go.” Thompson has lost 20 pounds due to an upper respiratory infection.

Oh yeah, the Sixers beat the Dion/LeBron/Kyrie-free Cavs. First home win of the season. Sometimes, when life hands you a respiratory infection, you make lemonade.

The East for the Taking: Toronto’s Master Plan