In the Belly of the Winston: Fat Jameis and More Key Story Lines to Track at This Year’s NFL Combine 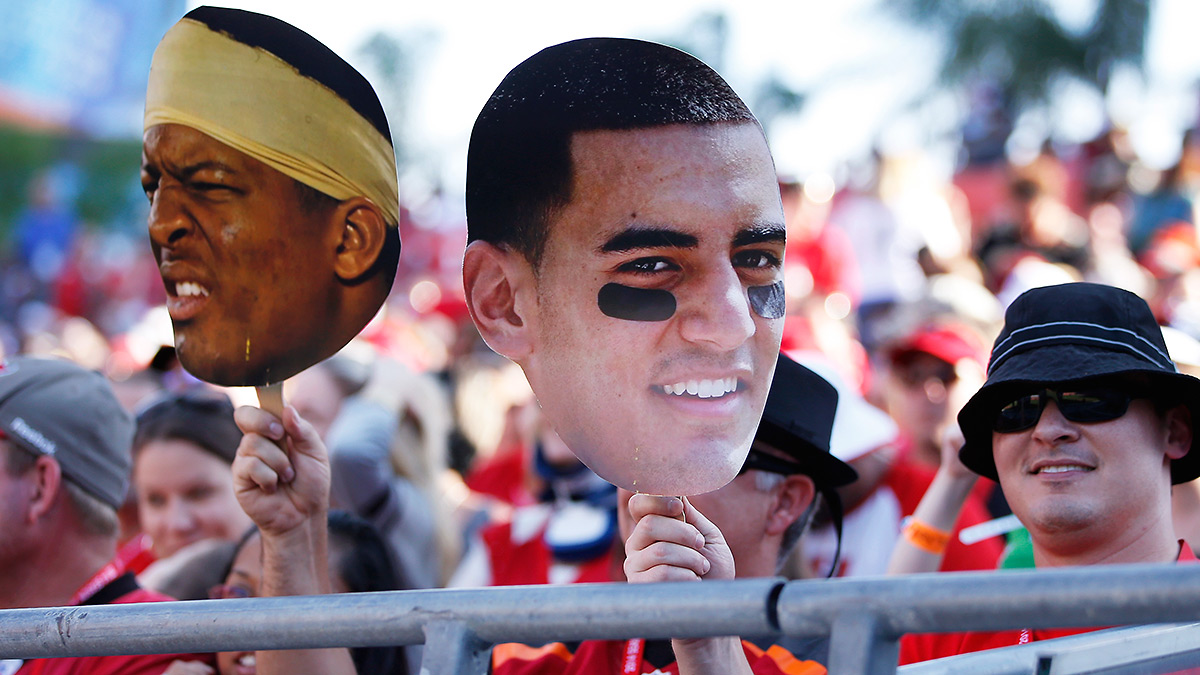 Jameis looks out of shape. pic.twitter.com/QMlKdDviwG

It surfaced over the weekend and immediately sparked a frenzy of speculation about Winston’s weight and conditioning, much like the unforgettable Fat Eddie Lacy nontroversy of 2013. Winston’s “personal”1 QB whisperer, George Whitfield, attempted to stem the tide of ZOMG JAMEIS IS OBESE! tweets by blaming Winston’s apparent corpulence on “the leash tight around his waist,” but that didn’t stop Jared “The Pillsbury Throwboy” Lorenzen from acknowledging Winston’s seemingly rotund figure. Real recognize real.

In honor of #FatTuesday I will play "who looks better?" P.S. The answer is obvious. #biggerisbetter #22 pic.twitter.com/2PXjLl9r5K

While it’s possible that Winston has done nothing but consume illicitly acquired crab legs since Florida State’s Rose Bowl loss, it’s more likely that this image was taken at an unflattering angle and Whitfield’s proclamation that “Jameis is in shape” will turn out to be true. We’ll find out for sure on Friday, when workouts begin at this year’s NFL combine in Indianapolis. It’s been nearly three weeks since the Super Bowl, but the combine is here to save us from another football-less weekend — provided your definition of “football” is liberal enough to include “Mike Mayock gawking at draft prospects in spandex.” I know mine is!

And while Jameis’s waistline may be the biggest (HA!) story of the weekend, it’s definitely not the only one. Here are some other combine plot points to track as you watch Marcus Mariota’s stock plunge for no good reason.

Speaking of Winston: Apparently, Whitfield isn’t his only tutor.

Little is known about Winston’s and fellow quarterback Bryce Petty’s study session with Jim Harbaugh, but based on this video, you have to assume it included a screening of The Sandlot and repeated use of the word “asshole.” Of course, Harbaugh is more demanding than anyone working in the NFL, so after benefiting from his tutelage, the combine should be a relative breeze for Winston and Petty. They’ll meet a head coach or GM and be like, “Why isn’t he asking me to bang out pushups while reciting the NFL’s personal conduct policy word for word?” A Harbaugh-controlled combine would be sublime.

Ever since Cam Newton was pilloried for his passing performance at the 2011 combine, top quarterbacks have been avoiding the throwing drills in Indianapolis like the plague, and with good reason: Instead of risking a poor showing amid a set of circumstances he can’t control, a prospective draftee can wait until his custom-crafted pro day to throw in front of scouts. In fact, given how far the pendulum has swung in that direction, deciding to throw at the combine is now seen as a ballsy move, an indication that a prospect is confident in his arm and has nothing to hide. Such was the case last year with Blake Bortles, who benefited from a strong aerial showing at the combine while Johnny Manziel and Teddy Bridgewater stayed on the sideline. That Bortles was eventually picked ahead of Manziel and Bridgewater may not be a coincidence.

Yesterday, Mariota surprised some draftniks by announcing he’d throw Saturday, inadvertently putting pressure on Winston to declare his intentions. While it’s been reported that Winston will follow Mariota’s lead and throw, Whitfield claims it will be a “game-time decision,” despite the fact that there is no game and Winston is not injured. Mariota and Petty must be shaking in their boots.

Miami wideout Phillip Dorsett is the heavy favorite to clock the fastest 40-yard dash of the weekend, primarily due to a 4.21 he supposedly ran last summer. While I advise you to take that time with a generous grain of salt, Dorsett does seem like a worthy challenger to Chris Johnson’s modern record of 4.24 seconds, perhaps even more so than current Steeler Dri Archer, who came perilously close to beating that mark last year with a 4.26. Don’t sleep on Ohio State receiver Devin Smith, though: Dude was an Ohio state champion in the 100 meters in high school and competed for the Buckeyes’ track team for the past three years, and his college football career basically consisted exclusively of running fly patterns, a preposterous number of which resulted in touchdowns.

There’s not much of a relationship between running a blazing-fast 40 and having success in the NFL, but in a way, that actually raises the stakes for the event: This may well be Dorsett’s only professional moment in the spotlight, and he’d better make the most of it before the Raiders inevitably force him into a long and arduous captivity.

Come for the quarterbacks, stay for Shaq Thompson. The Washington linebacker may be the most athletic prospect in this class, and he was pretty much born to put on a show at the combine. If his football career happens to mirror his ignominious baseball career, he could probably make it as a CrossFit bro.

Elsewhere on the defensive side of the ball, Missouri defensive end/human cannonball Shane Ray figures to run a Clowney-esque 40 time (read: in the mid-low 4.5s) and display his astounding explosiveness in the vertical jump. His fellow edge rushers — namely, Kentucky’s Bud Dupree, Nebraska’s Randy Gregory, and Clemson’s Vic Beasley — shouldn’t be far behind. Florida State cornerback Ronald Darby may even give Dorsett a run for his money in the 40.

Offensively, nominal Oklahoma wideout Dorial Green-Beckham should receive the most attention of any non-quarterback, though not only because of his performance on the field. The former top overall recruit in the nation was dismissed from Missouri last April after an ugly burglary and domestic assault investigation, and if he hopes to lock up the first-round slot his immense talent alone would justify, he’ll have to convince coaches and executives that he’s reformed. Though sadly, given the wave of scandal that rocked the NFL last season, it’s possible Green-Beckham could flub his interviews and still be drafted fairly high.

Meanwhile, UCLA quarterback Brett Hundley, who was plagued by accuracy woes in college and could be taken anywhere from the first round to the third day, probably has the most at stake of any signal-caller. And don’t forget about the offensive linemen! Texas A&M tackle Cedric Ogbuehi — yes, the Aggies have another top tackle prospect — was once considered a surefire first-rounder, but suffered a torn ACL in the Liberty Bowl and needs to pass his medical evaluations to avoid a draft day free fall, while LSU’s La’el Collins is so good that Tigers running backs coach Frank Wilson once claimed, “I’ll kiss my own ass” if Collins is not a top-five pick. Needless to say, Wilson will be watching the combine intently this weekend. You should be, too.