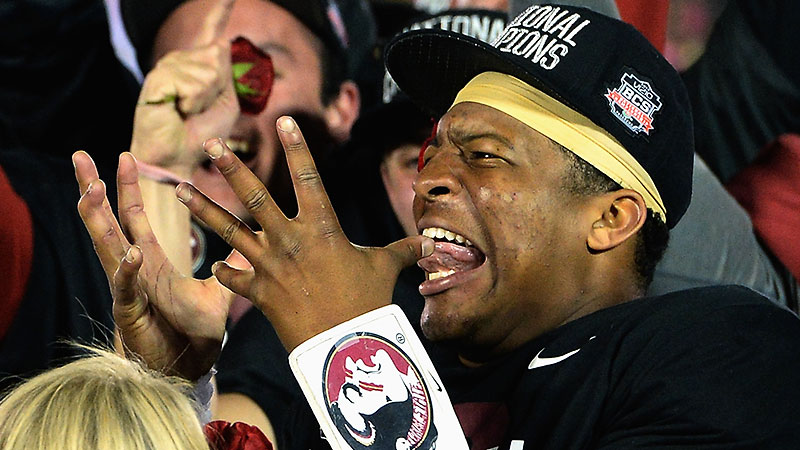 In certain parts of the country, like Florida and Georgia, something like 20 percent of a given user’s social media intake on any particular day is composed of material concerning the Publix chain of supermarkets, specifically praise for its eternally serviceable sub sandwich game. Things can sneak up. A couple dozen tweets about a sale on seafood products won’t necessarily trip one’s sensors, and it can take close to two full hours for realization to sink in that the sudden hullabaloo is not weirdly specific ACC fan-fic, but that Jameis Winston, reigning Heisman Trophy winner and arguably the most famous active college football player, has, in fact, been cited for shoplifting crab legs from the American South’s sweetheart of grocery stores.

We have some questions:

WHERE DOES ONE HIDE CRAB LEGS ON ONE’S PERSON?? Back in high school, we had a running game in our social circle that involved sneaking ever-increasing volumes of outside food and drink into our local multiplex using nothing but the clothes on our backs and powers of distraction, the high score of which (a large pizza, a two-liter Coke, and two massive Wendy’s Frostys into Kevin Costner’s The Postman) stands unchallenged to this day. But crab legs are spiny and spindly and also frozen, and there doesn’t seem to be a part of the human body where they would fit without too much discomfort or the risk of immediate detection. Of course, if there were a good place to conceal crab legs on the human body, we might never have heard about this story in the first place.

What was the plan here? Or was there a plan? Did the lure of the seafood case catch Winston’s eye on a cereal-and-sandwich run, or was it premeditated, a next-generation Jimmy Buffett “Peanut Butter Conspiracy” situation?

Should Florida State be concerned about repeating as national champion? Was this, in its own way, a lazy crime? Would a real champion have gone with a live lobster tucked under each arm, not even stopping to rubber band the claws?

How much do we love that this isn’t even an arrest-worthy crime in Leon County? It’s a refreshing attitude and a pragmatic acknowledgement that crab legs are an inalienable right. As refreshing as a vacuum pack of frozen seafood tucked into the waistband of your favorite pair of jeans on a muggy spring day.