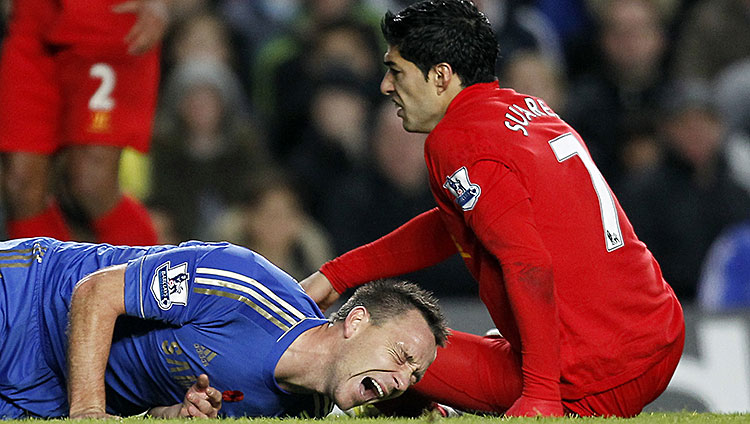 You can say a lot about John Terry. It’s important to point out the good and the bad. He allegedly had an affair with a teammate’s wife. He has captained Chelsea for 10 years and wore the armband for England for five. He racially abused Anton Ferdinand. He won three Premier League titles, four FA Cups, two League Cups, and a Champions League final. And if you call him injury-prone, you must also mention that he is also prone to healing quickly. He is Mister Chelsea.

When Terry limped off the field in the 72nd minute of the first leg of Chelsea’s Champions League semifinal matchup against Atletico Madrid last Tuesday, I knew he must have been in serious pain. It takes a massive injury — like the full weight of Luis Suárez breaking his leg — to sideline the veteran central defender. But the chances of an ankle sprain keeping him out of Wednesday’s second leg against Atleti are about as good as the likelihood of Jose Mourinho cracking a (non-sarcastic) smile on the sideline.

So it was no real surprise when the BBC reported on Tuesday morning that Terry was training with Chelsea. Later in the day, Mourinho announced Terry would captain the side on Wednesday.

Terry’s likely appearance in today’s match against Atletico Madrid is just the most recent in his history of somewhat miraculous recoveries from major injuries during his 16-year career with the Blues. Here some of his greatest-ever recoveries. I don’t know how he does it. Probably a mixture of modern medicine and English courage. Where can I buy some?

The Recovery: Terry had surgery to remove — as in take out — an injured lumbar disc in his back. He made his comeback start on February 7, 2007, only six weeks after the operation, playing 90 minutes in a 3-0 victory over Middlesborough. This is insane.

The Recovery: Terry suffered three broken bones in his foot after a violent challenge by Arsenal’s Emmanuel Eboué. Eight weeks later, on February 3, he played in the League Cup final against Tottenham. Chelsea lost 2-1 in overtime. This is about the standard amount of time one would need to recover from a foot injury like this, though give him extra points for the extra broken bones.

The Recovery: Terry dislocated his elbow when he collided with Petr Cech in a match against Bolton. The elbow was popped back into place while Terry was in an ambulance, headed to the hospital, and he was told to rest the injury. Ten days later, Terry played in the Champions League final against Manchester United, the first-ever all-England final. Tied, 1-1, the match went to penalties. Terry stepped up to take the fifth penalty kick, which would give Chelsea the championship. He slipped and missed. Man U went on to win. Was this because of his elbow? Probably not.

The Recovery: Terry injured his ankle early in a Champions League quarterfinal victory over Porto and had to be subbed out. The League Cup final against Arsenal was four days later, and Chelsea doctors ruled him out of it. But Terry didn’t rule himself out — he started against Arsenal in Cardiff. In the second half, he attempted a diving header on a corner, and was kicked in the face by Arsenal midfielder Abou Diaby. He was knocked unconscious and began choking on his tongue, minutes from dying.

Arsenal trainer Gary Lewin — who was treating an injured Arsenal player behind the goal — rushed to Terry and saved his life by repositioning Terry’s tongue. Terry was taken to the hospital for assessment. But when Chelsea beat Arsenal 2-1, he checked himself out of the hospital to return to Millennium Stadium and celebrate the League Cup victory with his teammates. He is definitely Wolverine.