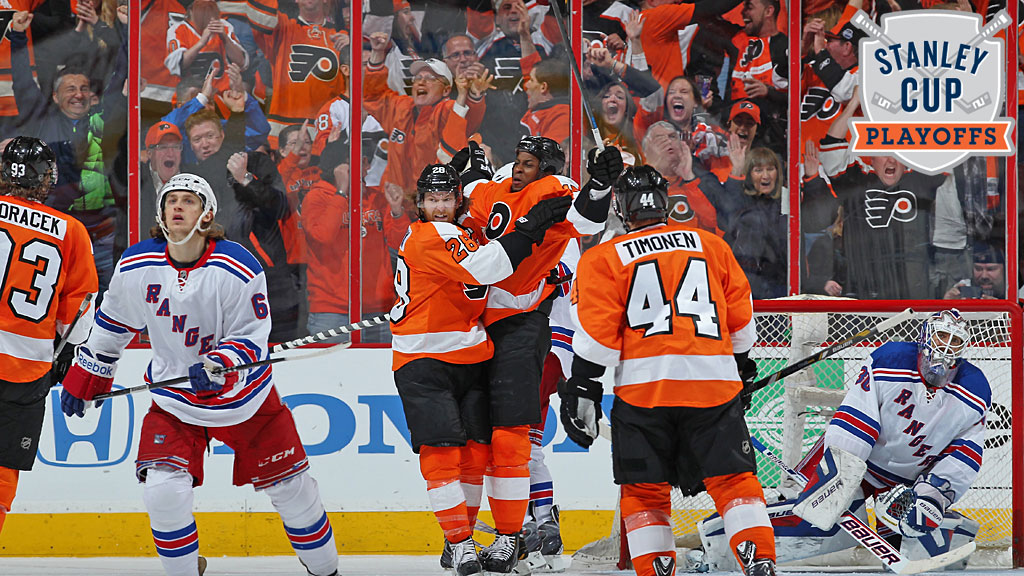 Following Game 1 of the Rangers-Flyers first-round playoff series, Philadelphia forward Wayne Simmonds had some words of support for rookie teammate Jason Akeson. The young player had taken a costly third-period penalty in a tied game that led to two quick Rangers goals, and Simmonds wanted him to forget about it — and fast.

“He’s just trying to make a hard play,” Simmonds told reporters. “You’ve got to have short memories in this game. If you dwell on things too long, they’ll eat at you.”

It’s advice that has come to define the way the Flyers have handled the Rangers in this seesawing series between the two longtime local rivals. Three times, the Rangers have won to take an overall lead, and three times, Philadelphia has coolly evened things up in the next game. (Even Akeson made up for his mistake, scoring the tying goal early in the second period of Game 2 to bring the Flyers back from a 2-0 deficit; Simmonds sealed things with an empty-netter.) Now the two teams will play tonight in a Game 7, one of three taking place around the league.

The Flyers seem to relish playing on the edge, and now they’ve got the Rangers on the brink. And Simmonds is the kind of athlete that, as an opposing fan, you simultaneously despise and covet; you want to wipe that grin off his face because you’re jealous that you can’t smirk right along with him. (Not that I know from experience.)

He’s as dangerous in front of the net as he is engaging in the locker room. Many players, particularly hockey players, might shy away from or bristle at answering questions about a racist owner in another sport on the day of an elimination playoff game. Not so much Simmonds, who was forthright regarding L.A. Clippers owner Donald Sterling: “Make him sell the team, get him out of there.” He said that, as a black player in the NHL, he himself was “kind of a fly in a bucket of milk,” and noted that “I’ve had enough things happen to me and I’ve seen enough things in this world that nothing shocks me.”

Then, a few hours later, Simmonds scored three goals in the Flyers’ 5-2 win. The one that seemed the most effortless was also the one that seemed the most deflating for the Rangers — a deflection of a Jakub Voracek shot that sent the Flyers’ home crowd into a hat-throwing frenzy and essentially ended the game. (I read on Twitter that Simmonds’s hat trick also earned fans free Egg McMuffins this morning.) Henrik Lundqvist wasn’t immediately pulled, but he would not return in the third. Steve Mason, conversely — one of eight goalies who has made playoff starts for Philadelphia during the Lundqvist era — had a standout performance, especially when you consider that he was injured for the first three games of this series.

Two statistics dogged the Rangers going into Game 6: The team hadn’t been able to defeat a postseason opponent in fewer than seven games since 2008, and, hand in hand, Lundqvist’s personal record with his team leading a playoff series was 0-11. After Tuesday, it’s now 0-12. (On the other hand, here are his stats in Game 7 situations.)

Afterward, Simmonds was asked again about Sterling, but this time he preferred to move on. “Honestly, that’s not something that’s really on my mind,” he said. “I go into the game situation and I try really not to think about things like that.” As he said last week, you’ve got to have a short memory in this business.