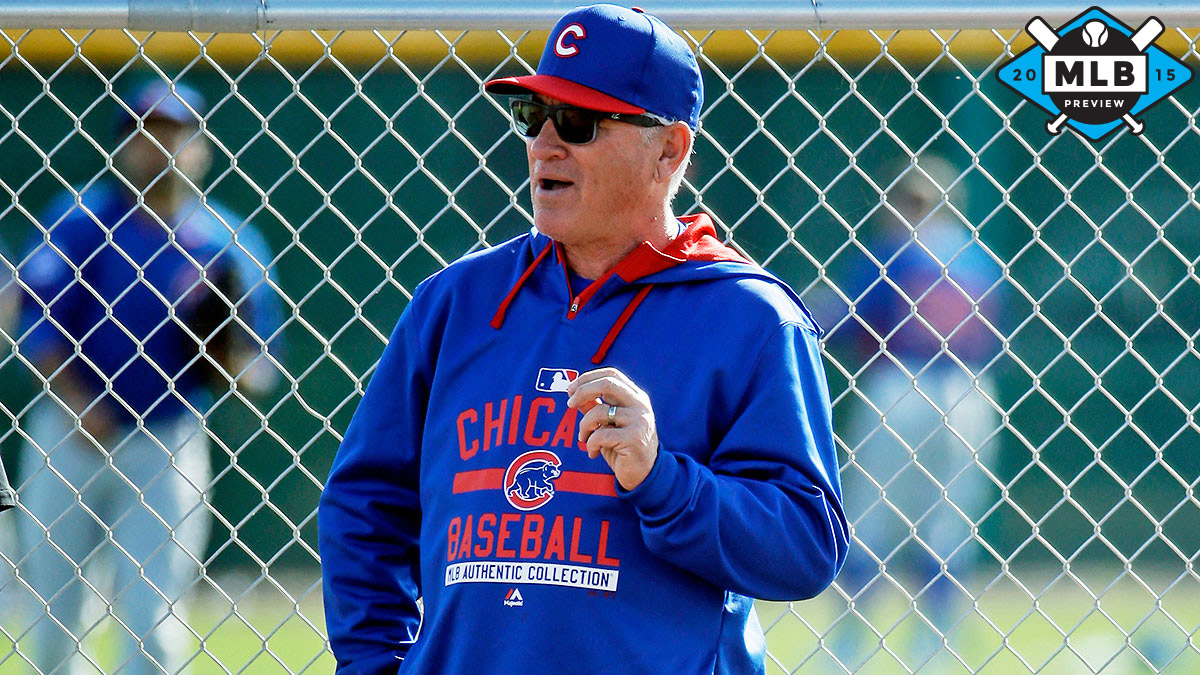 Diamondbacks fans don’t have much to feel optimistic about, but that could change if Bradley, arguably the top pitching prospect in the game a year ago, bounces back from the injuries that derailed his 2014 campaign. Those ailments led to ineffectiveness and mechanical inconsistency, and so the cycle goes, but a healthy, effective Bradley has the potential to be the team’s best homegrown pitcher since Brandon Webb. We’ll get a sense of his progress in camp. 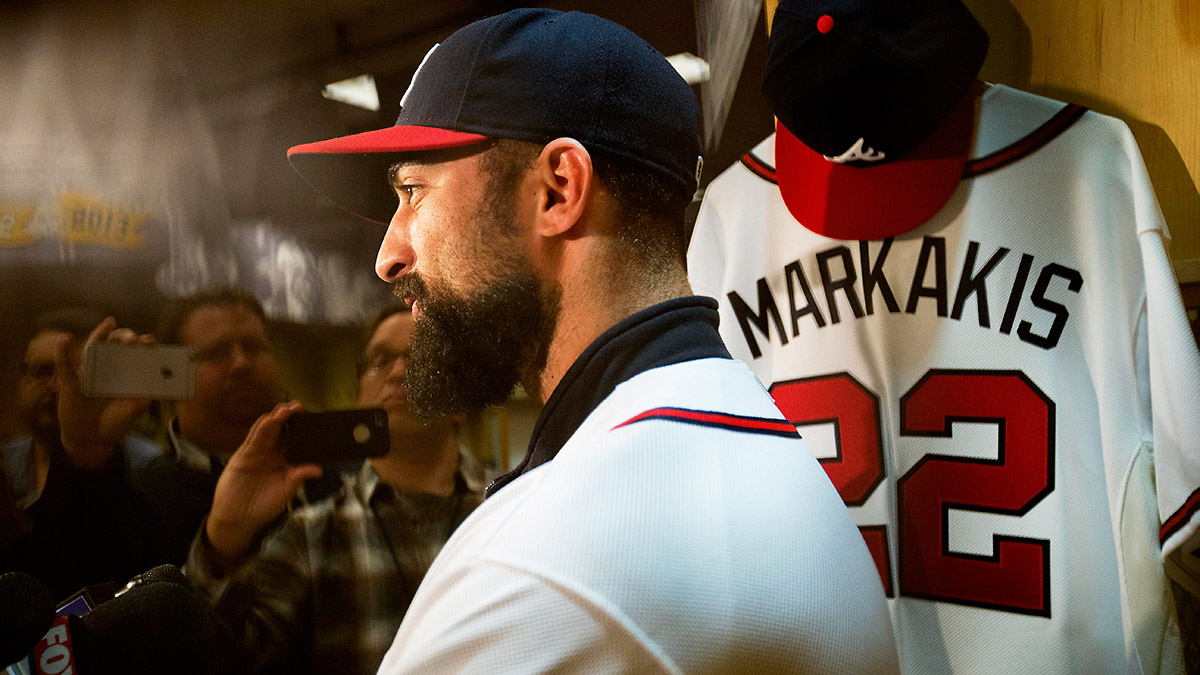 After liquidating Jason Heyward, Evan Gattis, and Justin Upton, the Braves brought in Markakis to play right field on a four-year, $44 million contract, which is weird, because that seems like a lot to give a 31-year-old corner outfielder who doesn’t hit for power and needed offseason neck surgery. Even if he’s not 100 percent to start the season, though, Markakis can’t possibly be more disappointing than the newly christened Melvin Upton. It’s hard not to feel bad for Upton at this point, but maybe something will finally click this spring and he’ll return to something approaching his former glory.

Chicago Cubs: Who are those guys with the jersey numbers in the 70s?

Adding ace Jon Lester and veteran outfielder Dexter Fowler will help the Cubs in the short term, but the buzz building around the franchise is largely based on Chicago amassing, in scientific terms, a butt load of young position players. We saw Javier Baez, Arismendy Alcantara, and Jorge Soler for the first time last year, and here’s a partial list of the nonroster invitees who will get a crack at major league camp: Addison Russell, Kris Bryant, Albert Almora, and Kyle Schwarber. Also new to the team and sporting a number in the 70s: Joe Maddon, in case all the commotion made you forget that Chicago also added the game’s best manager this offseason. The Cubs are either another year or another big trade away from making a run at the playoffs, but right now, this team is where the Nationals were four years ago.

Cincinnati Reds: Can this team prove that the complex interpersonal relationships surrounding baseball are more interesting than the game itself?

I make no secret of how profoundly boring I find exhibition baseball, but the first week of Reds camp has shown that spring training can be interesting if you don’t pay attention to the games. Would I watch a matchmaking show about pitchers picking throwing partners in the style of a turn-of-the-century MTV dating program? Yes. Was the highlight of the preseason Mat Latos not only burning the bridge he just crossed to leave Cincinnati, but rigging it to explode in a shower of glitter and flower petals? It was, until out of nowhere, in came Marlon Byrd — who wasn’t even on the Reds last year — off the top rope to fire back at Latos. I’m so drunk on human drama I can’t keep my metaphors straight.

I’m serious. I spent forever trying to give Rockies fans a reason to be optimistic other than “Maybe Troy Tulowitzki and Carlos Gonzalez won’t get hurt this year?” but I struck out. The Rockies are going to be bad again, and unlike other similarly bad teams, they don’t have a great chance of bouncing off rock bottom and back into contention thanks to their farm system or front office.

But hey, Coors Field is lovely. I haven’t seen such a beautiful building filled with so much garbage since my last trip to the Guggenheim in Bilbao, though.

Los Angeles Dodgers: How weird is it going to be to see Jimmy Rollins and Howie Kendrick in Dodger uniforms? 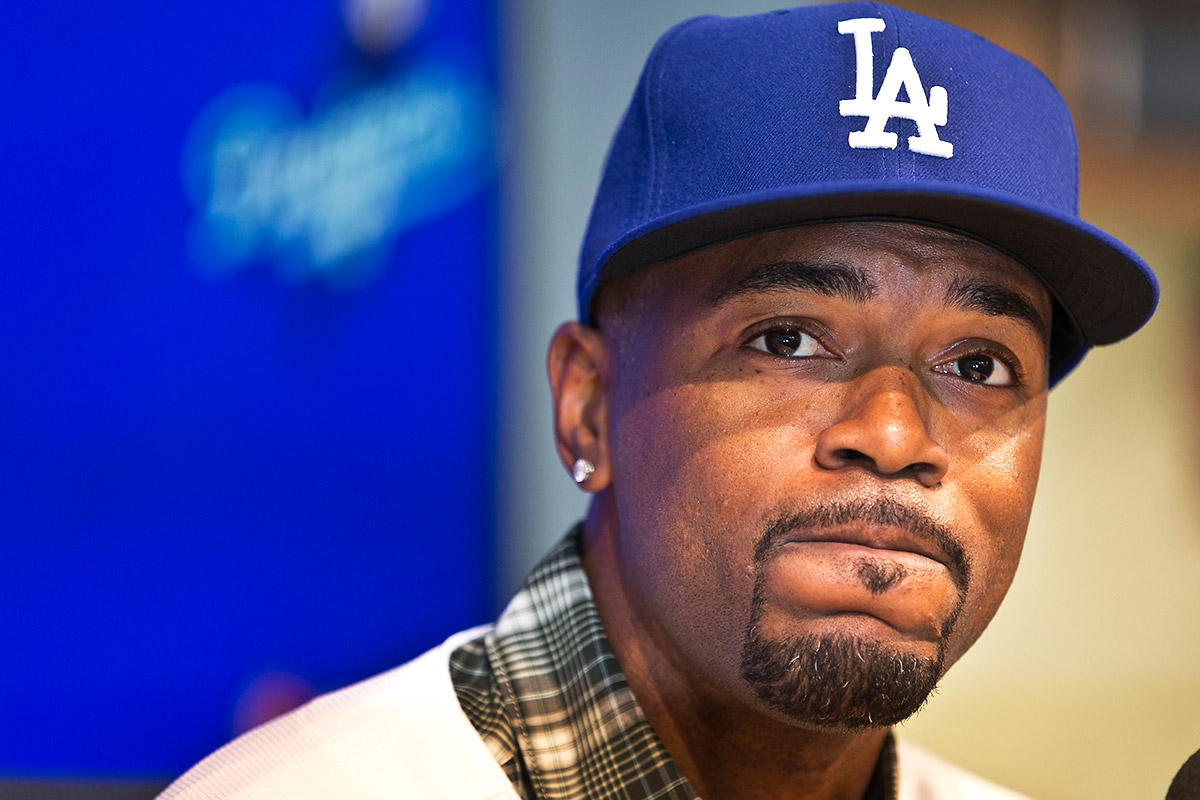 The Dodgers now have a pair of very experienced, very good two-way middle infielders in Rollins and Kendrick, both of whom come from extremely stable double-play combinations (Rollins with Chase Utley since 2005, Kendrick with Erick Aybar since 2007). This spring, they’ll have to develop that kind of chemistry with each other. Truthfully, though, the adjustment probably won’t be as hard on them as it will be on the fans; it’ll probably be June or July before seeing these guys in Dodger blue stops being jarringly weird.

Miami Marlins: How is the Mighty Giancarlo Stanton’s Face?

The big questions for Miami’s playoff hopes (when will Jose Fernandez come back? Is Dee Gordon actually good? What’s Christian Yelich’s ceiling?) can’t be answered in the spring. But we haven’t seen TMGS take a swing in game action since Mike Fiers hit him in the face with a baseball in September. It’s overwhelmingly likely that he’s fine, because the Marlins wouldn’t have signed him to a $325 million extension if they didn’t think he was, but I won’t be able to relax completely until he hits his first home run.

Milwaukee Brewers: What critter will the Brew Crew find at the ballpark this year?

The highlight of last season — yes, including Jonathan Lucroy’s insane breakout performance — was the emergence of Hank, a stray bichon frise mix who wandered into the team’s spring training facility and became the Brewers’ unofficial mascot. Hank was adopted by Brewers executive Marti Wronski, leaving a spot open for another animal to sneak into Maryvale Park and, from there, into our hearts. I’m rooting for a sheep this year.

“You know, between Jacob deGrom, Zack Wheeler, and Bartolo Colon, the Mets have a decent rotation. Matt Harvey’s throwing again — I don’t think you guys need to rush Noah Syndergaard to the maj—”

[A terrifying, baseball-headed man bursts through the wall, followed by a mob of blue-and-orange-clad villagers.] “WE WANT THOR! WE WANT THOR!”

Chad Billingsley and Cliff Lee would’ve made a great one-two punch in 2008, yet in 2015, the best-case scenario for the Phillies involves both returning to health. This team probably wouldn’t go anywhere even if both pitchers could return to their 2008 form, but both would make for attractive trade chips come midseason if would-be trade partners were convinced they’d stand up to a playoff run.

Pittsburgh Pirates: What can the Bucs expect from Jung Ho Kang?

Spring training will be our first extended look at Kang, a 27-year-old South Korean infielder who arrived in Pittsburgh this offseason. With only $16 million invested in Kang, and Neil Walker and Jordy Mercer and Josh Harrison already in the fold, the Pirates don’t need Kang to perform, but it’d sure be nice if he did. Translating performance in the Korean Baseball Organization to MLB is still very much an inexact science, so even a few dozen spring at-bats should help the Pirates get a better idea of the kind of player they’ve bought. 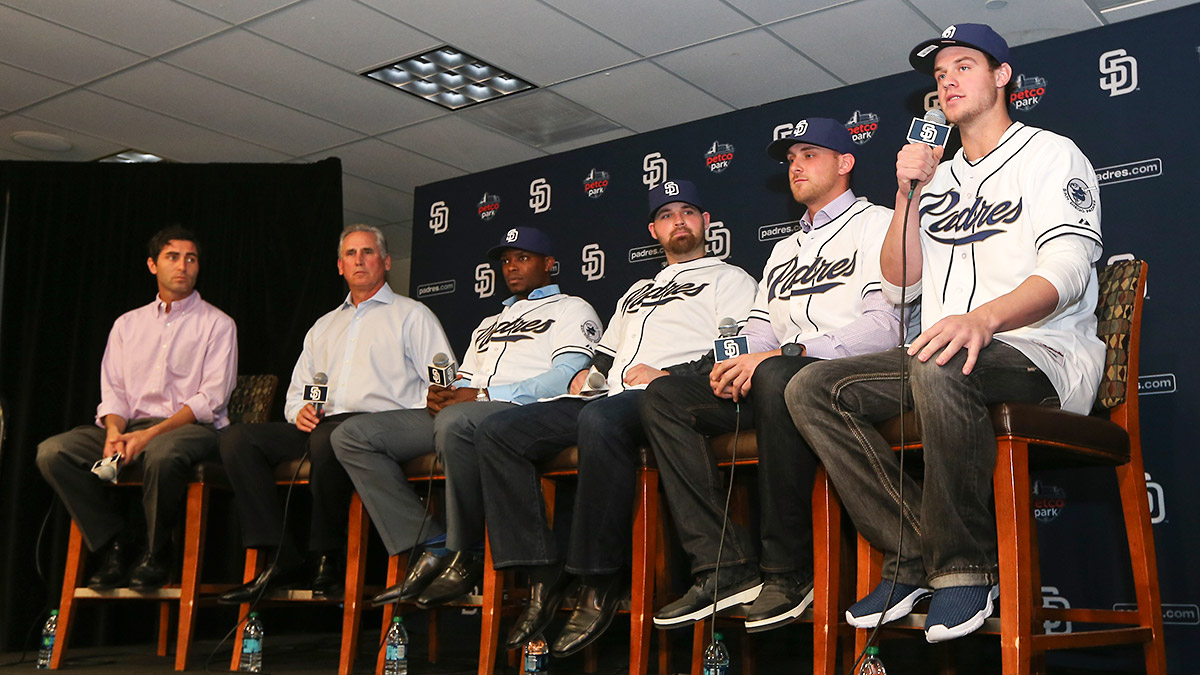 Contrary to popular opinion, going to war with three outfielders who fall just short of being able to play center field isn’t a season-killer. The Dodgers, Cardinals, and Nationals have all won division titles without a real center fielder in recent years, though in all cases, that was a temporary solution. Right now, it looks like Wil Myers is going to play center field for San Diego, though if he doesn’t bounce back from a down sophomore season, it might be time to have a serious talk about whether Cameron Maybin, if healthy, can do enough on defense to be the more productive player overall.

There’s not much to worry about here, since the Giants return almost everyone from the pretty well-rounded, veteran team that won the World Series last year. Some might worry about the downgrade from Pablo Sandoval to Casey McGehee at third base, but that’ll largely be offset by signee Nori Aoki filling the Mike Morse–size defensive hole in left field. I see no reason why the Giants won’t be good again in 2015, then go on to win the World Series again in 2016.

St. Louis Cardinals: Will a change of scenery do Jason Heyward good? 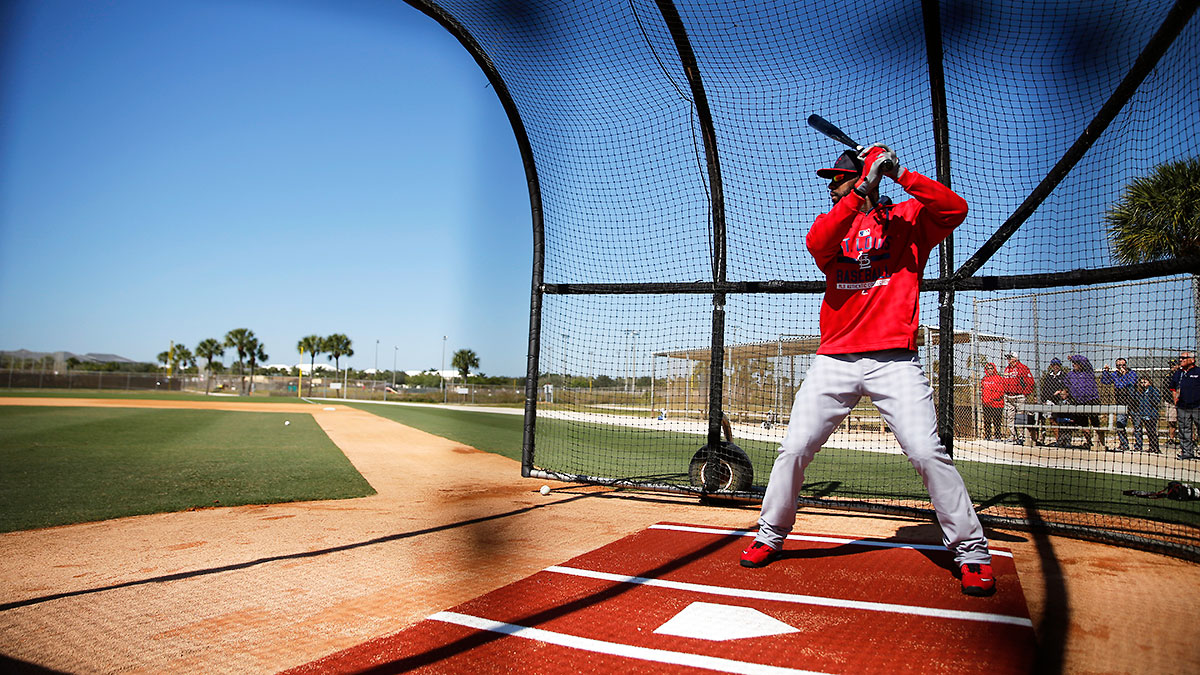 Heyward isn’t the player we’d hoped he’d be when he came up, but he’s already one of the top outfielders in the National League, and he’s still only 25. A shoulder injury he suffered as a second-year player kicked off a never-ending cycle of swing tinkering that seemed to limit his offensive potential, a theory Heyward himself spoke about after arriving in Cardinals camp. If Heyward doesn’t improve one bit, he’ll be a massive addition for St. Louis. But if he meshes better with the coaching staff in St. Louis than he did in Atlanta and turns into a monster power hitter, we could see a breakout season of biblical proportions.

Washington Nationals: How will Danny Espinosa do against righties?

There aren’t many guys who have 20–home run power, 20-steal speed, and the ability to play above-average middle infield defense. Espinosa is one of them. The problem is that though the switch-hitting Espinosa hit .301/.374/.485 while batting right-handed last year, he hit only .183/.241/.291 from the left side, which, given the prevalence of right-handed pitching, he did twice as often. Therefore, in addition to growing a stupendous, Jeff Daniels–in-Gettysburg mustache, Espinosa is toying with the idea of giving up switch hitting. It’ll be very interesting to see how well that experiment works, and how long he sticks with it.

How We’d Fix It: Three Ways the Colts Can Keep Andrew Luck Happy