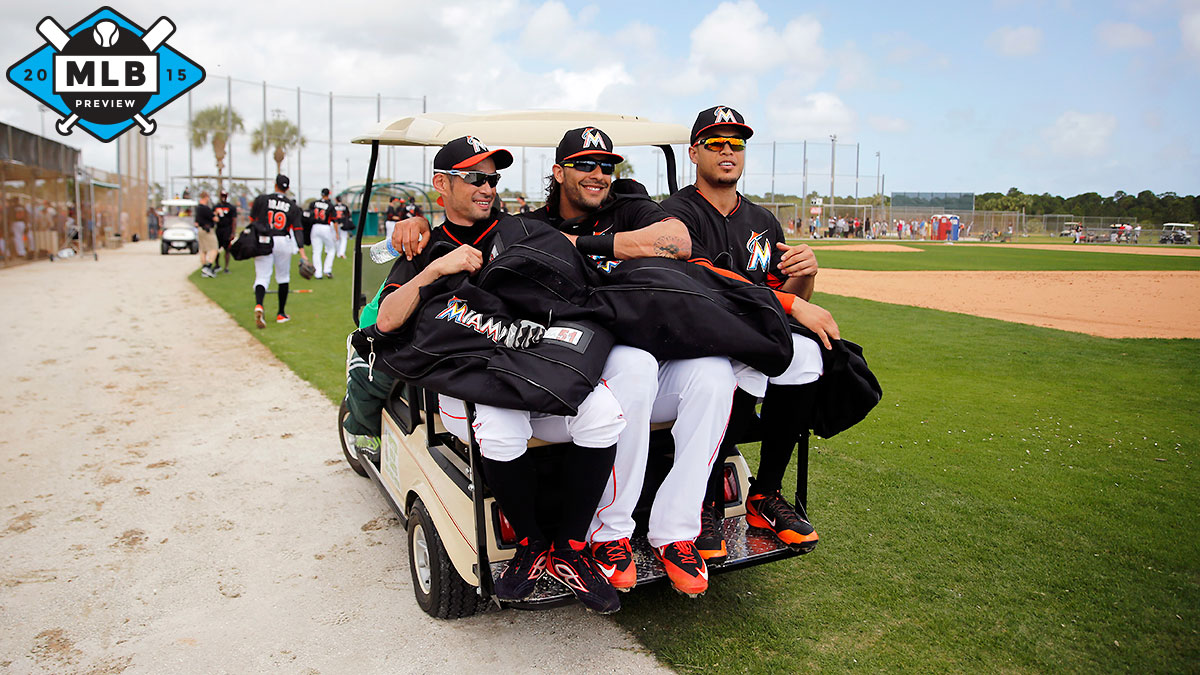 Predictions are no fun if you’re trying to be right. You go with the boring pick to increase your odds of success, but because there are 30 teams or 600 players vying for one goal, you usually wind up being wrong anyway. So here’s a non-boring prediction for you: The Miami Marlins will win the 2015 World Series.

Yes, the Marlins, who won only 77 games last year and who are just two years removed from immediately bailing on their first attempt in a decade at playing competitive baseball. The Marlins, whose upper leadership, namely owner Jeffrey Loria and team president David Samson, is the worst kind of shameless, avaricious, and petty, even by the standard of professional sports ownership — which is like singling out one golden retriever puppy for being particularly stupid. The Marlins, who wear tacky uniforms and play in a bizarre and tasteless stadium that served as a vehicle to transfer wealth directly from South Florida taxpayers to Loria’s pockets, a Concorde moment of graft and corporate greed so brazen it led to a mayoral recall. That’s right: The Marlins’ stadium toppled a government, the way losing a war might.

In short, the Marlins are in many ways an affront to both ethics and aesthetics, with no recent record of onfield success. The problem is that none of that is a compelling reason why they can’t win the World Series this season.

First, let’s unpack that 77-win record, which was within a game of the Marlins’ third-order winning percentage and not some fluke one way or the other. That total left the Marlins between eight and 10 wins short of what could reasonably be described as a playoff contender in 2014. But the team was within a half-game of first place until June and would have stayed in playoff contention if two things hadn’t gone wrong: First, Jose Fernandez blew out his elbow in May. Second, they fielded one of the worst infields a team could possibly assemble.

With Fernandez targeting the 2015 All-Star break for his return and seemingly on track to make good on that promise, the Marlins again won’t have their ace for a full season, but they should have him for more than the 51.2 innings he pitched last year, and those innings will come in the all-important stretch run this time. If Fernandez comes back healthy and on schedule, no team will make a more important midseason acquisition this year than the Marlins. And until then, they’ll have a full season of Jarred Cosart, plus Mat Latos, whom they absolutely stole from Cincinnati, to pick up the slack from both a recovering Fernandez and whatever regression to the mean they experience from Henderson Alvarez, who outpitched his FIP by a full run last year. (Though Alvarez has been so successful over the past 18 months despite such a low strikeout rate that I’m becoming more and more willing to throw out, or at least pay less attention to, the model in his case.)

To remedy the second fault, that historically bad infield, Miami went out and got Martin Prado from the Yankees to play third and Dee Gordon from the Dodgers to play second.

Make no mistake, for the long term, it was a bad idea to trade Nathan Eovaldi and Andrew Heaney, young pitchers with that key combination of potential and major league experience, for two competent but probably overrated infielders.

The two counterarguments: (1) The “long term” has no impact on the 2015 pennant race, and (2) “competent but probably overrated” is as much an upgrade over Donovan Solano and Casey McGehee as, say, the Nationals would have gotten by trading for Troy Tulowitzki and Adrian Beltre. Just being average in the infield is a huge win for the Marlins.

That’s because in Latos, Alvarez, Cosart, and eventually Fernandez, they’ve got a competitive rotation, and the outfield is already taken care of, and then some.

By this point, you’re probably familiar with The Mighty Giancarlo Stanton, who shows no sign — apart from the bitchin’ face mask he’s wearing on his batting helmet nowadays — of suffering from being hit in the face with a pitch last September. We as a society are being shortchanged by having a power hitter such as Stanton play in a run environment such as Marlins Park rather than in, say, Coors Field in 1998, but despite that, his impact remains self-evident.

But Stanton makes up a third of the best young outfield in baseball. In left, there’s Christian Yelich, who owns a career .365 OBP, a Gold Glove, and, as of Sunday, a shiny, new seven-year, $49.5 million contract, making him the second foundational player, after TMGS, the Marlins have chosen to lock up. Between them you’ll find Marcell Ozuna, 24, the least celebrated of the bunch, and a corner outfielder stuck playing out of position because his team didn’t want to go out and get a true center fielder. That strategy worked out pretty well last year, though, with Ozuna delivering 54 extra-base hits and grading out as average defensively en route to roughly a four-win season.

And there’s room for all three of those guys to get better.

This year’s National League has three very good teams (the Nationals, Dodgers, and Cardinals) and four teams that’ll make you want to walk into the sea (the Braves, Phillies, Rockies, and Diamondbacks) — maybe five, depending on how you feel about the Reds. The remaining teams all have severe flaws, but any one of them could win 90 games anyway, which makes it a great time to play in a league with two wild-card spots. It’s like the joke about the two hikers and the bear: The Marlins don’t have to outrun the Nationals; they just have to outrun the Padres, who are operating on the 2012 Marlins/2013 Blue Jays principle (and we know how well that turned out), or the Cubs, who for some reason have convinced a great baseball-watching nation that Jon Lester is the missing piece that will take a team from 73 wins and a last-place finish to the end of a World Series drought that’s two weeks younger than the Ford Model T. All of this is simplistic and reductive, sure, but if you’ve watched baseball in the wild-card era and come away with any impression other than that anyone who’s within a few games of a wild-card spot on September 1 has a shot at the World Series, I don’t know how else to convince you.

The Marlins were better last year than most people gave them credit for, and they’ve fixed the deficiencies that sank them in 2014. They won’t be the 2001 Mariners, but they’ll be competitive. And once a team has reached that plateau, it’s more palatable, for me at least, to use a prediction to make a statement: I’m onboard with Fernandez and Yelich and TMGS, and I want to see what those guys can do in October. And I’m sick of playing the odds and predicting yet another Cardinals or Giants vs. Red Sox or Tigers World Series and being wrong anyway. Predictions in baseball are almost always wrong, and if I’m going to be wrong, I want to be wrong with panache this time. Orange road jersey wrong. Dinger machine wrong.

The Miami Marlins are going to win the 2015 World Series.