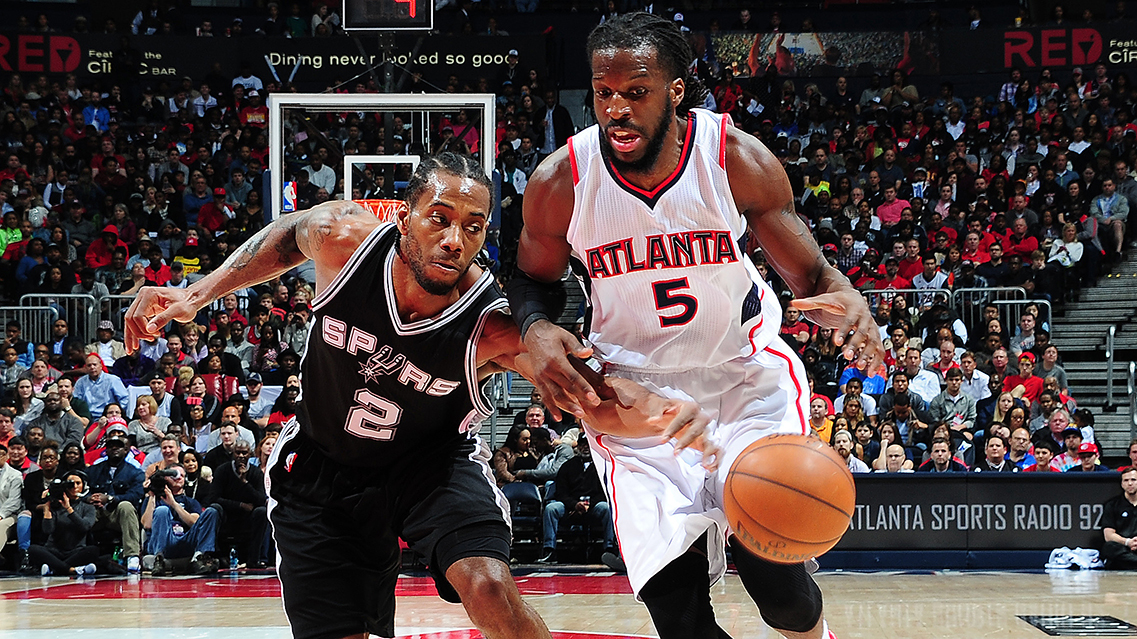 It’s hard to pick out the best single defensive play of the entire 2013-14 NBA season, but Kawhi Leonard’s block of Russell Westbrook in overtime of Game 6 of the Western Conference finals deserves serious consideration. That tense bit of #freebasketball is mostly remembered for Tim Duncan’s turn-back-the-clock domination, but Leonard’s moment of defensive genius was probably the game’s biggest individual inflection point.

Down one point with less than a minute left, the Thunder’s 3-on-2 fast-break chance represented a huge opportunity to take a late-game lead. As Reggie Jackson raced down the floor, he was flanked by Kevin Durant on his right and Westbrook on his left. The only Spurs defenders ahead of them were Leonard and Boris Diaw. Leonard confronted Jackson near the top of the arc, forcing him to dish the ball to a surging Westbrook — but Leonard wasn’t done yet.

Leonard changed the game with his giant left hand — like taking candy from an all-world point guard. It was simultaneously unbelievable, understated, and vital. If it’s true that the league’s biggest superstars make the biggest plays in the biggest moments, then it’s also true that Kawhi Leonard became a superstar in the 2014 NBA playoffs — just a different kind of superstar, making different kinds of superstar plays.

Leonard is now 23 years old and the reigning Finals MVP, yet when it comes to his basketball celebrity, he seems to take a backseat to other emerging young talents, like Kyrie Irving and Stephen Curry. Part of this is by choice; he doesn’t really draw attention to himself. You’ll never catch Leonard in an ad pretending he’s an elderly playground legend, or wearing a fake mustache and houndstooth, impersonating an elite insurance salesman — though, to be fair, if you’re watching TV in Texas, you can catch him in a toga with his teammates in a local supermarket spot.

He missed the league’s glitzy fashion show during All-Star Weekend. His brand has only one lonesome vertical: being really good at basketball. By nature, by choice, and by association, the Kawhi Leonard experience is antithetical to the league’s contemporary star-making apparatus — kind of like one of his iconic teammates.

And in 2015, even the nerdiest basketball observers still fail to to adequately assess the very thing Leonard is really good at: defense.

This chasm between what we see and what we understand about hoops was on full display last Sunday night in San Antonio, as the Spurs crushed the Minnesota Timberwolves, 123-97. Leonard finished the game with 15 points, six rebounds, and one assist. That’s certainly not a bad stat line, but it seems incongruent with the following postgame quote from Flip Saunders, who coached against Leonard that night: 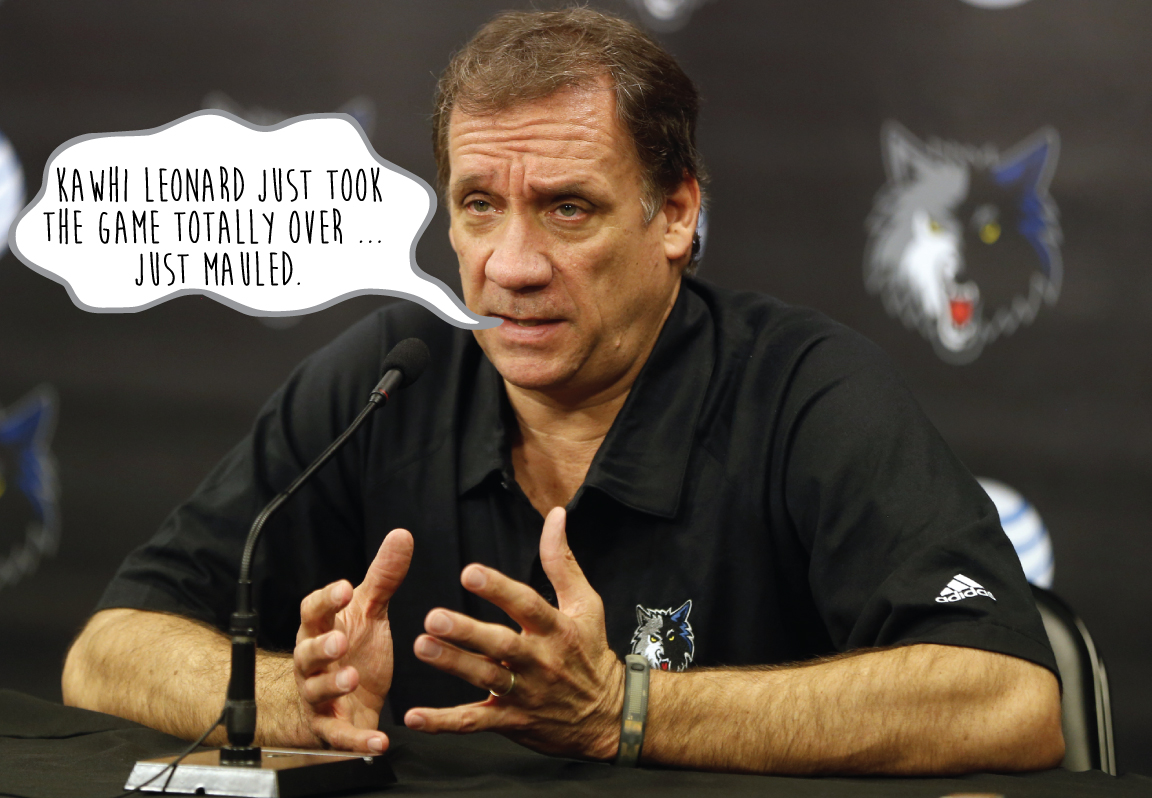 Usually, when an opposing head coach explicitly says somebody “took the game totally over” or “mauled” his guys, that means that person scored 40, or grabbed 20 boards, or dished out 15 assists, but this was not the case with Leonard. He took the game over by playing spectacular on-ball defense. Leonard has a habit of turning great players into average ones. That night, he shut down future rookie of the year Andrew Wiggins, stealing the ball five times, and disrupted several Wolves possessions by doing stuff like this:

Leonard played only 25 minutes that night, but while he was on the floor, the Spurs outscored the Wolves by 24 points. Wiggins logged a minus-32.

In the last 20 years, only two forwards have led the NBA in steals per game: Scottie Pippen and Gerald Wallace. As of today, Leonard is on pace to become the third. He currently leads the league in steals per game, with 2.3. That may not seem like a lot, but steals are extremely valuable events, and that value is often undersold by the little integers that show up in the box score the next day.

For over a decade now, the savviest basketball analysts have been talking about points per possession. But not all possessions are created equal. As it turns out, the nature of how a possession begins has a huge impact on its eventual fate. Leaguewide, possessions that originate with “live ball turnovers” — like steals — are generally the most effective possessions in the game. And the value of a steal does not end with the turnover, as steals also typically yield extremely valuable ensuing possessions going the other way.

This isn’t exactly a new idea, but thanks to new kinds of performance data, we now have numbers to back it up.

As of today, the Clippers and the Warriors have the most efficient offenses in the league. Both teams average 109.3 points per 100 possessions, just about four points better than the league average of 104. But even those incredible offenses can’t hold a candle to the efficiency of an average team following an average live ball turnover. Overall this season, NBA offenses scored a whopping 124 points per 100 possessions1 following a live ball turnover. In other words, even the most mediocre NBA teams suddenly morph into dominant offensive forces immediately after the kinds of live ball turnovers that Leonard is really good at creating.

Here’s another example, from Friday night’s Spurs win over the Celtics, in which Leonard takes Evan Turner (a.k.a. “Evan Turnerover”) to Claw School:

Another thing to note here is that Leonard’s steals, unlike many of his peers’, are hardly ever the result of defensive gambling. He’s not riskily jumping into passing lanes or leaving his assignment open. His takeaways are usually a product of him playing terrific defense. That’s why steals, as a metric, offer an incomplete picture of defensive skill. They can be reflections of which players gamble the most as much as symbols of who plays the most consistently great defense.

As I wrote about a few weeks ago, the league’s player tracking system is finally enabling us to understand defensive performances, revealing which players are really good at suppressing and disrupting opponents’ shots. It turns out Leonard is one of the best, not just at stealing the ball, but also at reducing the scoring prowess of his assignments. Below is Leonard’s defensive shot chart from last season, which reveals that he is really good at preventing 3-point shots from even happening. Those tiny dots all around the 3-point arc suggest that when Leonard is the assigned defender, players hardly ever even attempt 3s. The blueness of those dots reveals that when they do end up shooting, they exhibit significant decreases in efficiency. 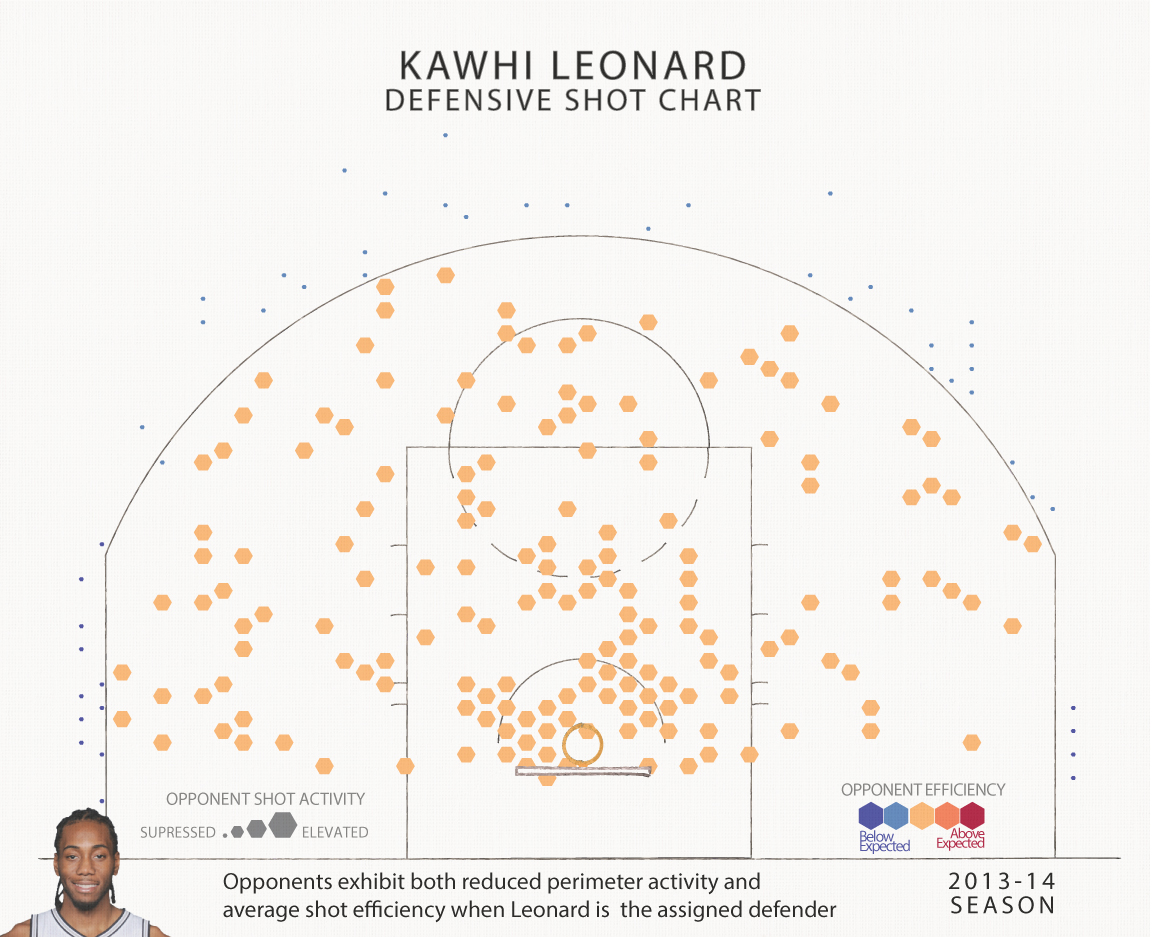 Kawhi Leonard is Daryl Morey’s nightmare. Leonard’s defensive assignments — guys like Durant, LeBron James, and James Harden — regularly fail to live up to expectations on the perimeter. Nobody looks forward to a night trying to play offense against Leonard.

Leonard’s defense makes you want to come up with a more elegant stat for defense — something like an Almost Steal. Check out how Leonard greatly damages a Heat possession by knocking the ball away from James, but doesn’t get the steal in the end.

Maybe he’s not a conventional superstar, but Leonard is one of the most important players in the whole league. Since his return from injury in mid-January, the Spurs have gradually regained their dominant form (that Knicks loss aside). They’ve won 10 of their last 12 games and suddenly look like a real threat to defend their championship. With Leonard on the floor this year, the Spurs are 35-16 (that would be the fourth-best winning percentage in the league), but they are only 9-9 without him. In March 2015, just three and a half years after his NBA debut, Leonard might be the most important player on a team that features three surefire Hall of Famers.

Yesterday afternoon in Atlanta, Leonard played a phenomenal game, making plays like this, and leading his team to a statement win against the best team in the Eastern Conference:

Two weeks ago, in that same arena, the Hawks honored Dominique Wilkins with a brand-new statue and a ceremony that included a video tribute, featuring Wilkins’s old rival Larry Bird. Bird used the opportunity to dust off his Hall of Fame trash talk, joking about the statue, “I’m pretty sure it’s not made in a defensive stance.” It was a subtly profound jab. It’s not hard to find a basketball coach to remind you that defense is half the game, but it’s virtually impossible to find a statue of a basketball star in a defensive stance. If the Spurs ever make a Kawhi Leonard statue outside of the AT&T Center, that may change.

While there’s no shortage of emergent superstars trying to be like Mike, Leonard seems more like Pippen. And while Leonard will probably always remain underappreciated by the folks on Madison Avenue, it’s clear he’s valued by the people who know the most about the game.