Defenders of the Valley: How Clemson’s D Is Carrying the Tigers 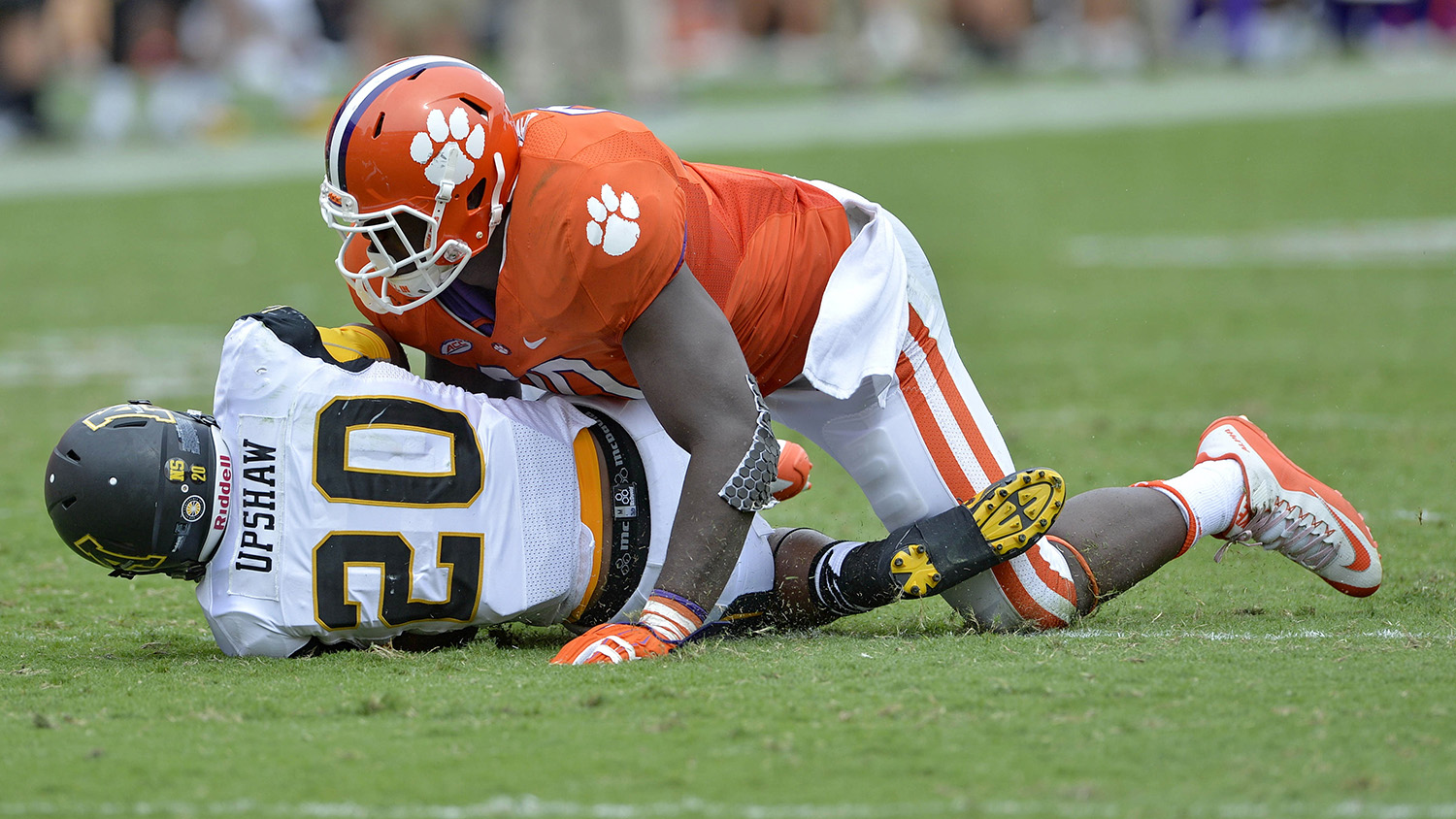 The way cupcake-laden September schedules are assembled, most contenders have logged only one or two relevant games to date, and with a couple of notable exceptions — it’s probably safe to assume that Ole Miss is for real, and that Oregon has been cast into the wilderness — the status quo on the first weekend of October still largely resembles the nascent guesswork we started with back in August. For teams like Clemson, which enters the weekend ranked 12th in the AP poll off perfunctory wins over Wofford, Appalachian State, and Louisville, all we’ve really learned ahead of tomorrow night’s much-anticipated visit from no. 6 Notre Dame is whatever we can discern from the injury report.

The jury on Clemson remains decidedly out until it completes its home game versus Notre Dame on Saturday, but the early returns have offered one particularly shiny glimmer of hope: The defense, widely regarded in the preseason as the likely Achilles’ heel to a potential playoff run, may actually be pretty damn good.

It certainly passes the eye test. Against Wofford and Appalachian State, Clemson did exactly what it should do to Wofford and Appalachian State, holding both to 10 points on less than 300 total yards. Against Louisville, the Tigers responded to the step up in competition by clamping down, holding the Cardinals to 10 offensive points1 with five sacks, two interceptions, and 12 stops on 14 U of L third downs. While neither quarterback that Louisville deployed in that game is a Teddy Bridgewater flashback, that didn’t take away from the fact that in its first ACC test, the Clemson D looked fast, aggressive, and nothing like the ostensibly rebuilding unit that Tigers fans had been led to expect.

That Clemson can play defense should come as no surprise — at least, not anymore. Maybe that was the case a few years ago, when the program’s reputation hinged mainly on up-tempo offense and a propensity to get involved in semiregular shootouts. Even in a banner campaign like 2011, the year the Tigers finally put a 20-year ACC championship drought to bed, the defense allowed at least 31 points in five of the last six regular-season games, then found itself on the wrong end of a 70-point barrage in the Orange Bowl courtesy of West Virginia — resulting in a 37-point margin, which remains the most lopsided result in both Orange Bowl and BCS history.

But all that changed with the arrival of defensive coordinator Brent Venables, a man bursting with such unbridled sideline energy that another, larger assistant coach has to be assigned to (literally) physically restrain Venables from absentmindedly bounding onto the field. 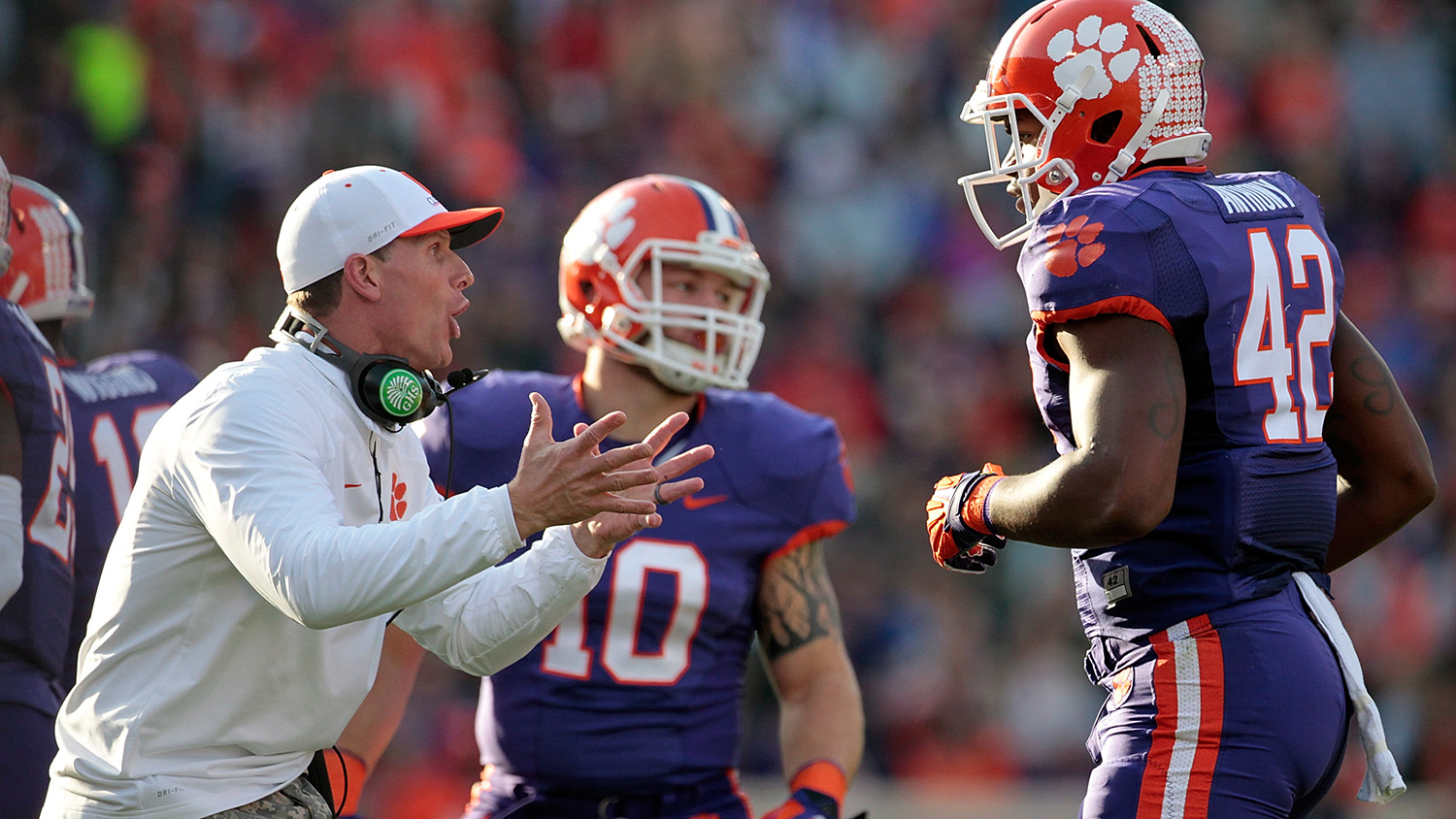 Venables’s arrival from Oklahoma, in the wake of the 2011 Orange Bowl disaster, marked the beginning of a gradual but undeniable ascent. Last year, Venables’s third at Clemson, marked the culmination of that upward trajectory: Boasting eight returning starters from 2013, the 2014 Tigers ranked second nationally in both total and scoring defense against FBS opponents, and finished among the top five by virtually every other relevant measure. (The only notable exception was rushing defense, where they ranked a distant ninth out of 128.) According to Football Outsiders’s S&P+ ratings, Venables’s unit was the no. 1 defense nationally against the pass, no. 2 against the run, and no. 2 overall.

Altogether, Clemson held eight of last year’s 12 regular-season opponents below 20 points in regulation, including Florida State,2 Louisville, and South Carolina. It ended the year with a 40-6 romp over Oklahoma in the Russell Athletic Bowl, a beatdown so thorough that it convinced Venables’s old boss, Bob Stoops, to chuck his offensive coordinator and start over from scratch. Venables was rewarded with a contract extension and a raise within days of the game, ensuring at least one more season in the fold before somebody finally poaches him to be a head coach.

He was worth every cent. It turns out that Clemson can still play defense, even after a historic exodus from the senior class that anchored last year’s breakthrough: Nine full-time or part-time starters are gone from that group, including four players who were voted first-team All-ACC by league coaches last December, four who were drafted in May, and seven who are currently listed on NFL rosters. Meanwhile, of the four returning starters, only two (cornerback Mackensie Alexander and safety Jayron Kearse) actually started a majority of the Tigers’ games in 2014, and a third (safety Korrin Wiggins) was lost in the preseason to a torn ACL. Minus Wiggins, Clemson’s opening-day roster boasted fewer career defensive starts coming into this season (59) than any Power 5 conference team except Syracuse (41), Oregon State (41), and Stanford (48). 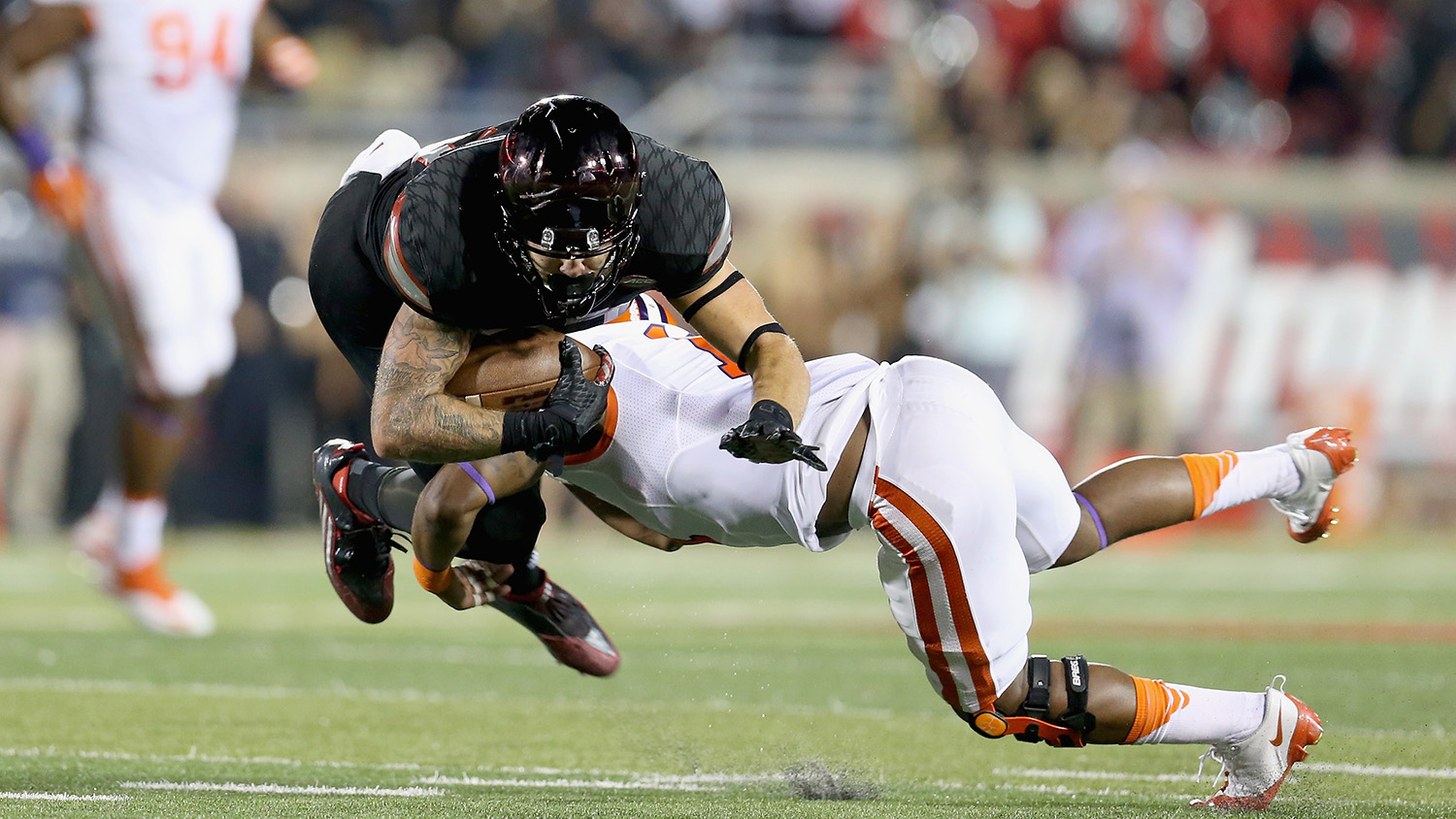 What the new group lacks in reps, it might make up for in raw athleticism and depth, especially — and most surprisingly — on the defensive line. As difficult as it was to imagine this season’s front living up to last season’s standard, the Louisville game offered a tantalizing glimpse of its potential. There was little to no drop-off in talent from edge rusher Vic Beasley, a first-round pick who’s now starting for the Atlanta Falcons, to junior Shaq Lawson, who racked up 21 tackles for loss in 2013 and 2014 as a backup and has a better-than-even chance of following Beasley in the first round. Inside, the Tigers have filled the void left by fifth-rounder Grady Jarrett with junior Carlos Watkins, a former top-100 recruit who’s healthy for the first time since a 2013 car crash that killed his cousin, and five-star freshman Christian Wilkins, whose part-time role only figures to grow. “The disruption that they caused was a huge reason we were able to keep [Louisville] off balance,” Venables said after watching his young front four pretty much swallow the Cardinals’ young offensive line whole. “The first five or six drives it was bam, bam, bam and we were off the field. Yeah, we played well.”

So did the secondary, a slightly longer-in-the-tooth group anchored by Alexander, a redshirt sophomore who has already crowned himself — in third person, no less — as the best amateur cornerback in America. (“In my opinion it’s not even close. I think every guy that talks about Mackensie knows I’m the best corner in college.”) He’s certainly in the running: Although there’s no reliable source for targets against individual college defenders, the fact that Alexander logged more snaps last year than any other player on the nation’s no. 1 pass efficiency defense while barely appearing on the stat sheet is a good indication that opposing quarterbacks avoided him like the plague (or like their NFL counterparts avoid Richard Sherman). But Alexander was a known quantity coming into the season: The unknown was the other corner, junior Cordrea Tankersley, who went a long way toward winning over the fan base against Louisville with six tackles, two passes broken up, and an athletic interception in man coverage.

Before we get too carried away here, it can’t be emphasized enough that anyone buying Clemson stock at this point3 is still betting heavily on potential over anything resembling a proven track record.

They still haven’t played a team of substance. And the offensive unit that everyone thought would emerge as the Tigers’ strong suit has already lost its best receiver to a neck injury and is stuck with a true freshman left tackle. More alarmingly, for a would-be Heisman candidate, sophomore quarterback Deshaun Watson looked very ordinary at Louisville, with two interceptions. And for as nice as the defense has looked, Watson is driving this bandwagon: If he isn’t the burgeoning superstar the preseason believers4 made him out to be, it’s unfair to expect the defense to pick up that much slack.

But if Watson can live up to expectations and the offense can round into form, then the early play of the Tigers defense suggests the potential to carry Clemson through the ACC schedule and into the final four. We’ll know a lot more after Saturday. Mackensie Alexander will match up against dynamic Notre Dame wide receiver Will Fuller and Lawson will go one-on-one against the Fighting Irish’s touted left tackle, Ronnie Stanley. It promises to be two of the better matchups of the season from the perspective of pro scouts, and will go a long way in dictating the two Tigers defenders’ professional future. But if Clemson can survive Notre Dame and get to 4-0, it’ll have other, more tangible goals to tend to first.