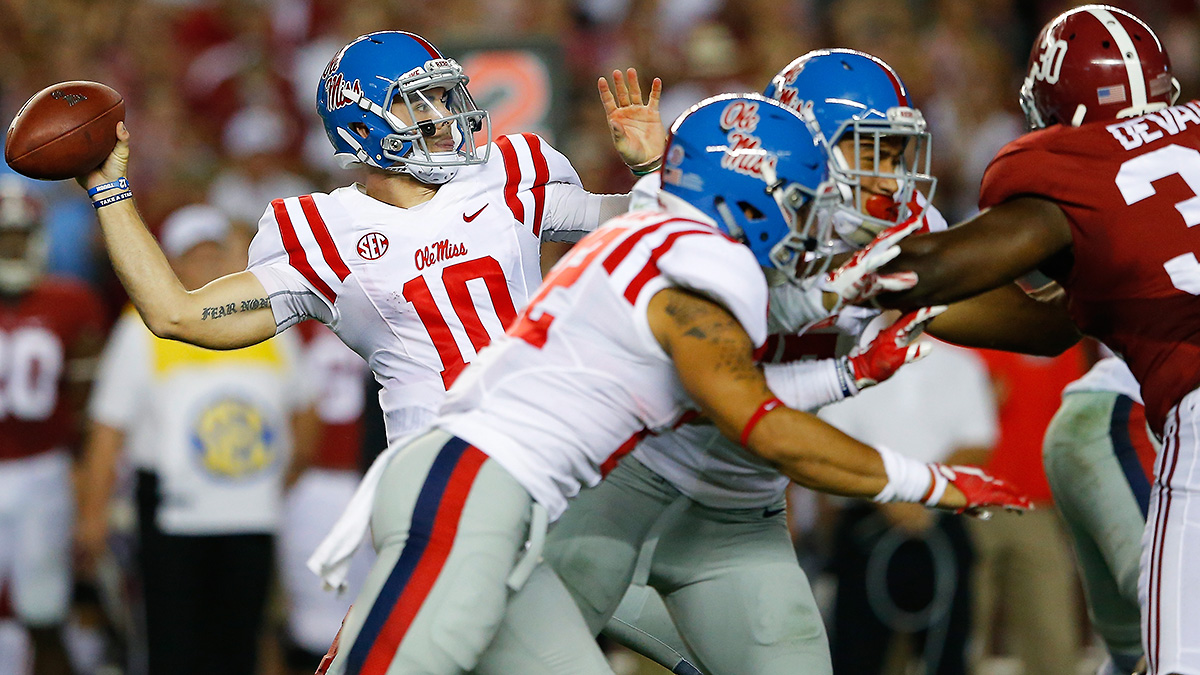 Before we project any further forward into a college football season that could veer in any number of literal and philosophical directions, I want to go back for a minute, to a passage from a book published nearly 10 years ago. The book is Michael Lewis’s The Blind Side, which should not be confused with the film adaptation of The Blind Side, a far more sentimental and single-minded animal. Because what Lewis’s book is really about — beyond the cinematic rags-to-riches story of an offensive lineman named Michael Oher — is the central conflict over football’s future. And as is often the case, Lewis managed to crystallize this debate over the course of a few short sentences:

Here’s why this passage is relevant in 2015: Lewis was writing about a high school coach named Hugh Freeze, who is decidedly a football liberal, despite having grown up in one of the most politically conservative regions in America. At the time, Freeze was Oher’s coach at Briarcrest, a Christian school in Memphis, and he found himself battling against the notion that Briarcrest should filter its offense entirely through Oher by calling a single running play over and over again, because Freeze found that inherently boring. Football, to him, was about dreaming up new ideas; football was a path to creativity and originality. “Hugh thinks football is supposed to be fun,” Sean Tuohy, Oher’s guardian, told Lewis.

A decade later, Freeze is the coach at the University of Mississippi (his home-state school), and on Saturday, Freeze’s team defeated Alabama for the second consecutive year, this time by a score of 43-37 on Alabama’s home field. It was a peculiar game, in that its signature play came straight out of the Rube Goldberg playbook; and it would be easy, given that Ole Miss wound up collapsing late in the season after last year’s victory over Alabama, to presume this is the sum of the Rebels’ persona, that they are essentially a high-speed fun-filled novelty act that will once again fall victim to the brute force of the SEC West. Three years ago, Alabama coach Nick Saban gave voice to the skeptics when, after being asked specifically about Freeze’s up-tempo offense, he famously replied, “Is this what we want football to be?”

This, of course, is not a fresh argument anymore. This is the argument Lewis encapsulated 10 years ago, in writing about Bill Walsh and the advent of the West Coast offense in the NFL; this is the argument that hangs over Chip Kelly’s head in Philadelphia like a perpetual rain cloud; and this is the argument that will accompany Freeze’s band of merry pranksters if they continue to make a run through the SEC, as Gus Malzahn’s Auburn Tigers did a few years back. They cannot run the ball efficiently enough to win this conference, the conservatives will say. Their quarterback is too careless, their offense too dependent on gimmicks.

And this is why college football is the most fascinating sport in America: It is a fun-house-mirror reflection of our national argument. 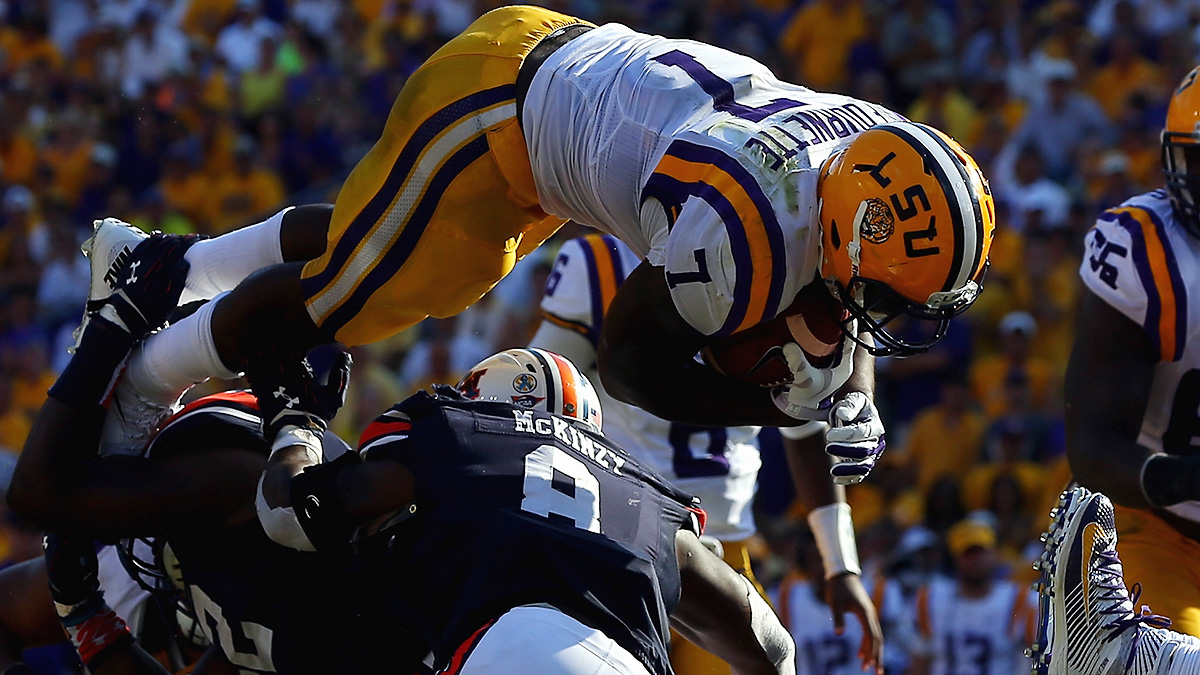 Something else very strange happened this weekend outside of the Ole Miss–Alabama game, but it was part of the same broad debate: After beating Arkansas, Texas Tech coach Kliff Kingsbury issued an entirely unsolicited dis of Razorbacks coach Bret Bielema, claiming that Bielema stood up at a summer coaches’ clinic and advocated for the sort of fundamentalist football that coaches like Kingsbury are working against. “[Bielema] stood up and said if you don’t throw to the fullback, we’ll kick your ass, and if you throw it 70 times a game, we’ll kick your ass,” Kingsbury claimed.

Maybe this was based on a personality conflict; but mostly, it was a philosophical conflict, in that Bielema has attempted to utilize physicality to overpower the SEC West and (at least so far) has failed. And it’s kind of mind-blowing to think that an argument in favor of liberalism could emerge from Lubbock, Texas, but that’s essentially what Kingsbury was advocating for: the notion that football is more about guile than brute force.1 In this context, at least, Bielema is Ted Cruz and Kingsbury is Bernie Sanders.

And that’s why the SEC West is so unbelievably fascinating at the moment, beyond the sheer wealth of talent: That debate is playing out from week to week, with four teams (Ole Miss, Auburn, Texas A&M, Mississippi State) that tend toward offensive liberalism, and three (LSU, Alabama, and Arkansas) whose head coaches lean conservative. On Saturday, Ole Miss’s victory over Alabama was balanced out by LSU’s Leonard Fournette–aided pounding of a suddenly feckless Auburn squad. The best part of this debate is that there are no absolutes; the best part of this debate is that it has essentially become a referendum on the question Saban asked three years ago: What do we want football to be? And, on a deeper level, it gets at the central question facing football itself: What is the best thing for a sport whose future is shrouded in biological angst? 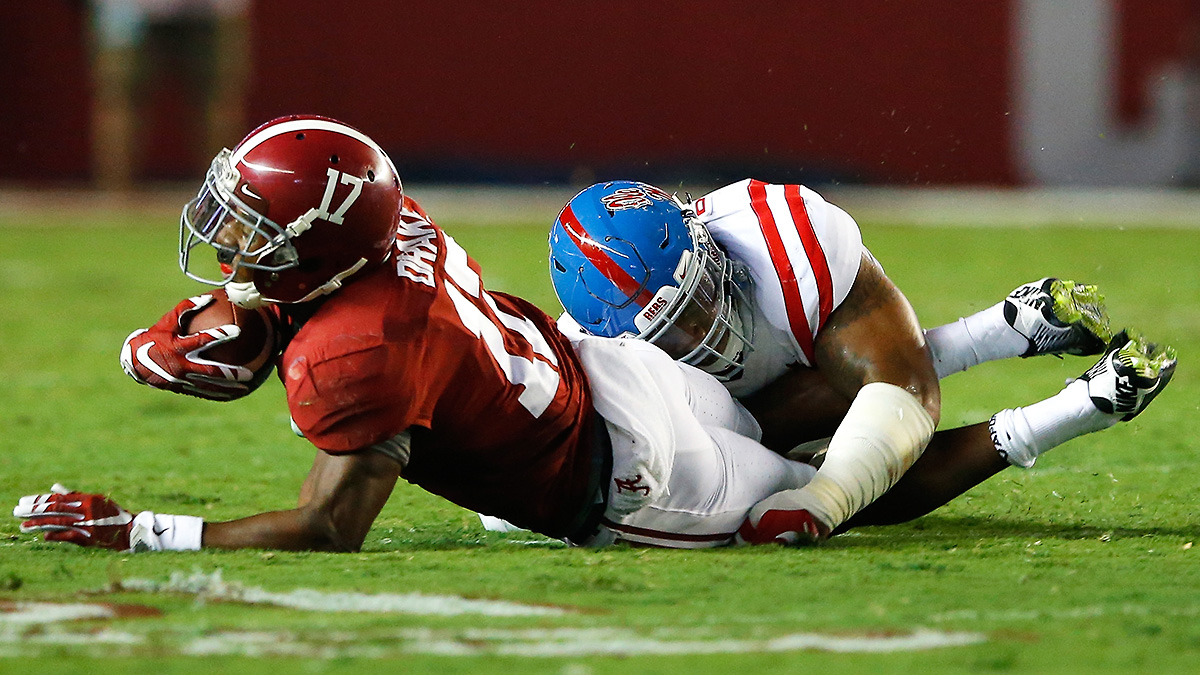 There was a time when a team like Ole Miss would have operated this way out of necessity, because the Rebels possessed inferior personnel to their opponents. That’s clearly not the case anymore. Chad Kelly, whose roundabout path to Ole Miss is almost as fascinating as Oher’s, is a far more dynamic quarterback, at least at this point, than anyone on Alabama’s roster; it is readily apparent that Freeze’s shockingly great 2013 recruiting class is beginning to pay dividends, that Laquon Treadwell is a transcendent wide receiver and Robert Nkemdiche might be the most disruptive defender in America. (At some point, the Rebels may also get All-American offensive tackle Laremy Tunsil back following an NCAA investigation.) Ole Miss is nastily athletic, and Ole Miss is creative, and Ole Miss is for real.

In that way, the argument is blending into something altogether complicated; in that way, it can no longer be said that the notion of offensive liberalism is somehow a fad. Even coaches like Saban (who hired Lane Kiffin to coordinate and open up his offense) have acknowledged it offers certain inherent benefits. This coming Saturday, Texas A&M, which propelled Kingsbury into his first head coaching gig, will face Arkansas, and the Aggies will be seeking to prove, once more, that they are on the proper side of this debate. But maybe there is no proper side. Maybe the only way we find out what we want football to be is to let the argument continue to evolve, in remarkably entertaining fashion, on our television screens.