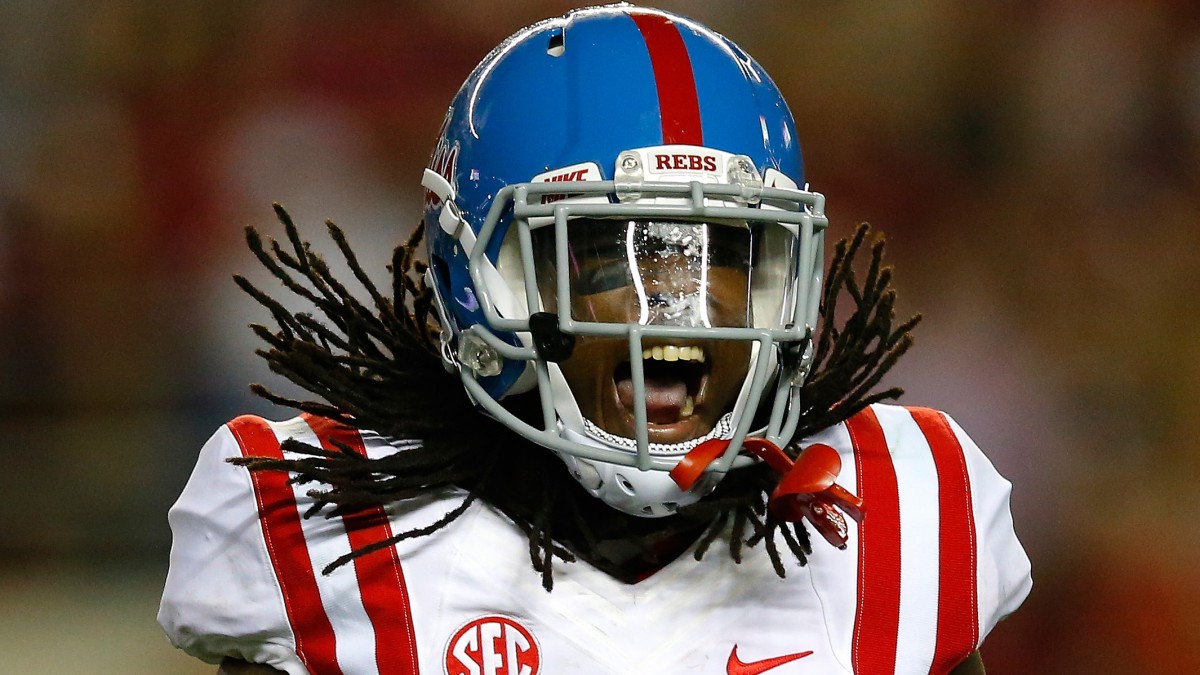 First, a formal apology for the recommendation that you skip the early games this past weekend in favor of human contact, errands, and the marquee games later in the day. If this suggestion caused anybody to miss out on the runaway mine-cart ride that was UConn-Missouri, you probably had a little less fun than your wire-to-wire-watching pals, but you’ll also probably live longer. Fair trade-off?

Because fans who began their Saturdays with the nooners and hung in for the end of Pac-12 play are lucky to be able to process human language on a screen today. The piñata of college football1 broke wide open in Week 3, a slate so overstuffed with action that even the undercard results could fill their own highlight reel. There’s a lollipop here (Colorado knocking off Colorado State in Denver!), some gummy worms over there (Kansas State being taken to triple overtime by Louisiana Tech!), a stray candy bar underfoot (whatever the hell got into Miami late against Nebraska!). And will you look at that? An apple just bounced off a crimson helmet and right into your hands, and it broke open, and it’s full of spiders.

Anyway: You shot 90 pounds of football this weekend, but are able to carry only 40 back to the wagon. Below, a lovingly crafted batch of topics to mull as we head into the final round of September games.

There really was a 5-min span where Iowa hit a 57-yard FG, Texas missed a game-tying PAT, and Ole Miss hit the flukiest no-no-YES TD ever.

1. One, Mississippi. There are plenty of chances between now and December for Ole Miss to be laid low. It is fair to be curious how their offense will bear up against the Gators’ defensive front in a couple of weeks. It is fair to wonder how the ground game will look if the Rebels are forced to run for significant chunks of a contest. It is fair2 to speculate whether their quarterback is being pursued by international agencies in connection with an underground wildlife circus that stages fights featuring endangered owls. But here, at this very moment, the Rebels are the class of the SEC West. They beat Alabama in Oxford a year ago only to watch the Tide make the playoff anyway after three regular-season losses knocked the Rebs out of contention — but nothing can take away Ole Miss’s first win in Tuscaloosa since 1988 and its first back-to-back wins against Alabama in program history, or erase the memory of this unassailable play-of-the-year front-runner:

Isn’t it fun when it looks like the football is also having fun?

The Tide had earned the right, over the years, to feel like they should win this game — and they had some poor luck to go along with their poor execution this weekend. But this is why they play the games, and nights like Saturday night are why we stay awake for all of them.

2. Don’t look now, but Notre Dame looks like it has zombie strength. The Baader-Meinhof phenomenon is the sensation of “frequency illusion,” in which once something has caught your attention, you start to notice it everywhere. On the one hand, season-ending injuries are a sad and constant reality of this sport. On the other, it feels like we’re noticing blows to the Fighting Irish roster because they’re happening all the time. Notre Dame was down five starters before welcoming Georgia Tech for what was supposed to be a hard-fought game, put on a remarkable show to beat the Yellow Jackets in South Bend, and in the process lost a starting safety to an ACL tear sustained while celebrating a defended pass. And it doesn’t get remotely easier from here: After a brief respite at home against UMass in Week 4, the Irish embark on an October schedule that involves trips to Clemson and Temple and visits from Navy and USC.

3-4. The Pac-12 North looks pretty open; the South, not so much. For those of you scoring at home, Stanford has a win over USC, and USC — ranked no. 6 in Week 3 — has what could be a long, long season in front of it, including road games at Arizona State, Notre Dame, Oregon, and … Cal.

Right. Cal! The Golden Bears were happy to benefit from Week 3’s second-most-soul-eviscerating finish. New quarterback Jerrod Heard of Texas personally recorded 527 yards of offense, culminating in a 45-yard scoring run that was capped off thusly:

So it was that the fourth quarter in Austin began 45-24, and ended 45-44, and so began our irresponsible speculation on the possibility of a North champion other than the Ducks or Cardinal. It’s way too early to discount Oregon, which has just one loss to what looks like a rugged Michigan State team. And given the stats Stanford put up against the Wildcats and Trojans, it’s hard to know what to make of the team from Palo Alto this early. But it’s starting to feel like a three-team race for the 2015 division title is at least plausible, right? Or at least fun to think about?

Meanwhile, in the South: Why, yes, that was 2014 Triangle All-Star Myles Jack snapping Tanner Mangum’s game-breaking touchdown streak. Jack’s heroics followed a rally by the Bruins’ ground game to edge out BYU, one that made UCLA look very much like a team capable of supporting its still-fledgling freshman quarterback even when he acts like a guy playing his first season of college ball.

5. Auburn’s magic is GONE. Whatever trickster god gifted the viewing public with the Prayer at Jordan-Hare and the Kick-Six game has not been given enough baby goats’ blood, and it’s starting to show. It feels mildly disrespectful to even make the Auburn Tigers the protagonists of this section, when the LSU Tigers they were playing on Saturday were fielding Leonard Fournette. Everything that happened in Baton Rouge feels like it should be discussed relative to wherever Fournette was while it was happening. This is our new heliocentrism, and this Bayou Bengal is the surly sun:

If and when this Will Muschamp defense jells to the point where it can handle youth and injuries, we may look back at this moment with more kindness, but you don’t often see guys running this way even against a lower-division team. Overmatched competition is one thing, but Fournette’s out there atomizing defenders. That kind of thing doesn’t just happen in a vacuum, although tackling him appears to be as futile as trying to breathe in deep space.

(Because you’re about to go and look: LSU plays at Ole Miss the week before Thanksgiving, November 21.)

6. Georgia, at least, appears to have its feet set. While the SEC West was off ravaging itself, the Bulldogs were setting an NCAA accuracy record with their much-maligned transfer quarterback. Sure, why not? And doing it against Steve Spurrier’s South Carolina team, a team he has used in the past as his proxy in the continuation of the Cocktail Party rivalry, to Georgia’s frequent dismay? Why not!

7. It could get so much worse for Arkansas before it gets the tiniest bit better. Call this Spiteration Saturday, when Kliff Kingsbury will see your disdain for Texas spread teams and raise you a strip of your own hide. If the Red Raiders’ head coach had a mane, he would’ve tossed it here. If he had a crest of feathers, they’d be standing straight up and rustling. Oh, and Arkansas goes into Texas next week, to play A&M in Arlington. Jerry Jones is gonna put scorpions in all the visiting lockers and it won’t do him a dang bit of good.

8. The American gets more and more exciting every week. To the previously lauded efforts of Temple and Memphis, let’s add two offshoots of the Stephenville High coaching tree: Chad Morris’s SMU, who hung better against TCU than the Mustangs did against Baylor in their opener, and Philip Montgomery’s Tulsa Golden Hurricane, who never stopped chasing Oklahoma. Could you imagine, back in August, being this excited for AAC league play to get underway in earnest?

9. This can’t pass without another mention. The time has come for a robust national discussion regarding WHAT IN THE HELL, MISSOURI AND CONNECTICUT. Have you ever seen a 9-6 game that took this kind of circuitous route to get there?

Have you ever been more sure, after witnessing a deadly interception, that the team committing that turnover was going to go on to win its division for some outlandish reason that human calculating can’t even conceive of yet? Missouri to Atlanta. We’ll figure out why in December.

10. We are all of us in for something marvelous. September college football and November college football are entirely different breeds of fun. In November it’s all about stakes, but in September it’s mostly about mistakes, teams learning who they are and what they’re capable of, and serving as an especially potent reminder of what sets this sport apart from the NFL: It’s so much more human. Not having the foggiest clue what form a given team might take isn’t frustrating at all, as long as you’re not making your living as an oddsmaker. Rather, it frees you to imagine anything, without tangible floors or ceilings for any team. Alabama doesn’t have a quarterback and September’s almost over! Ohio State has three of the best on its roster and turned the ball over five times against Northern Illinois! Three weeks in, it looks like we’re headed for the very best kind of year there is in the game: The one when absolutely everybody looks beatable.

But time enough for that next week. Get ready to kick the hell out of this anthill again in a week or so. For now, the mission is threefold: rehab, vengeance, and what have you.