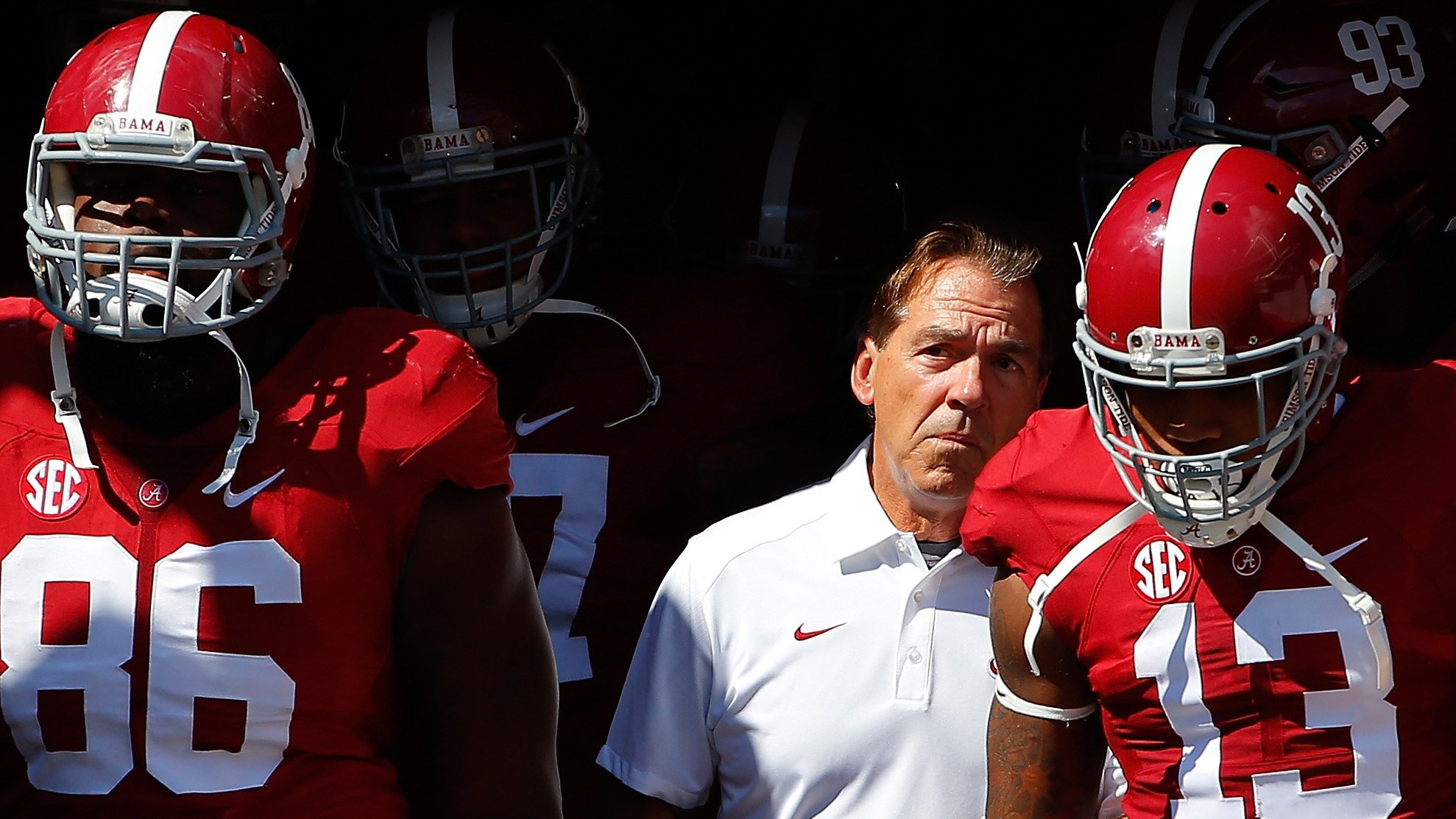 We’re almost to the first turn! How’d THAT happen? By the end of this weekend, a goodly number of teams will be a quarter of the way through their seasons, most of them without losing to Temple1 or Toledo.2 And while Saturday morning will afford you, the viewer, some downtime, don’t waste those moments. Sleep and hydrate well; this is the week all the good games start to overlap, and you don’t want to miss a thing.

You know we’re sitting on four million pounds of fuel, one nuclear weapon, and a thing that has 270,000 moving parts built by the lowest bidder. Makes you feel good, doesn’t it? (All times Eastern.)

Top 25 Matchups: Four this week, staged in two overlapping pairs on four networks, and if American communications conglomerates are allegedly so skilled at colluding, why can’t these games be spread out so that all of us could watch all of them? No. 18 Auburn, fresh off a heroic Jordan-Hare comeback against Jacksonville State, travels to no. 13 LSU (3:30 p.m., CBS), where we’re almost guaranteed a close game because the day the Bayou Bengals do what you expect may arrive, but it is not this day. Also at 3:30 (NBC), playoff dark horse no. 14 Georgia Tech kicks off at no. 8 Notre Dame, which just lost its fifth starter in a month to season-ending injury. In the late flight, no. 15 Ole Miss plays at no. 2 Alabama in what should be a downright nasty division fight after the Rebs dealt the Tide their only regular-season loss of 2014 (9:15 p.m., ESPN). There’s a little breathing room between the SEC headliner and the West Coast marquee game, no. 19 BYU at no. 10 UCLA (10:30 p.m., FS1), which you’ll want to stay up to watch the end of in case elevated backup Cougars quarterback Tanner Mangum decides to fling another game-saving touchdown pass into quintuple coverage.

How High Are the Week 3 Stakes? High as an elephant’s eye. After last week’s Auburn keel-over, Alabama’s back to looking like the clear front-runner to carry the SEC’s banner into the playoffs, but Ole Miss is one gnarly test to have to take in September.

Destination Game of the Week: Memphis at Bowling Green (3 p.m., ESPN3). You could, if you can get up to northern Ohio, be looking at the future winners of the AAC and MAC playing one another without even having to wait for a crummy December bowl game. If that’s too far north for your thin blood, try Cal at Texas (7:30 p.m., Fox), where Sonny Dykes and Tony Franklin’s Bear Raid offense should bear prolific fruit, and where everyone in Texas should at least be in a good mood following the departure of reviled Longhorns AD Steve Patterson.

Rivalry Games of the Week: With all due respect to the Rocky Mountain Showdown (Colorado vs. Colorado State, 7 p.m., CBSSN), series that award traveling trophies that look like they’ve been pried off the wall of the nearest Cracker Barrel will always receive pride of place in this space. This year’s Battle for the Iron Skillet, sending SMU to no. 3 TCU (8 p.m., FSN), will hopefully foreshadow a future that’s not so heavily streaked with purple once the Mustangs’ Chad Morris gets the program where he wants it. And the headliner rivalry game, as always, is the Battle of I-10, UTEP at New Mexico State (8 p.m., ESPN3). Either the Silver Spade or the Brass Spittoon would be enough of a quality talisman to lap the field in any given week, and the Miners and Aggies trade both.

Grudge Matches of the Week: PRIVATE SCHOOL FIGHTS!! No. 23 Northwestern at Duke (12:30 p.m., ESPN3) and Stanford at no. 6 USC (8 p.m., ABC) graciously provide the winners with on-field bragging rights and the losers with the opportunity to save face by boasting about the theoretical relative value of their degrees. But the real bile, as is so often the case, is set to be spewed in the SEC, where in addition to the aforementioned Tide–Rebels tilt, we’ll also be treated to South Carolina at no. 7 Georgia (6 p.m., ESPN). There might not be anything Steve Spurrier loves more, outside of the azaleas at Augusta National, than putting the screws to his loathed former Cocktail Party rivals, but given the way the Gamecocks played both in victory against UNC and in defeat against Kentucky, even the Bulldogs might not be able to underachieve enough to make it a close one. And later on in Lexington, there’s a divisional rivalry game you won’t want to miss. The 2014 Florida–Kentucky game ended in bitter recrimination; the 2015 edition will be played on Wildcat turf, with the Gators operating under a new head coach (7:30 p.m., SECN).

Best Throwback Game: Nebraska at Miami (3:30 p.m., ABC/ESPN2), the kind of powerhouse-of-old matchup that makes you wish both Nebraska and Miami were better at football right now.

Not Trying to Tell You How to Live Your Lives, Except for Right Now: What to Watch in Week 3

Friday: Three choices, the best of which is no. 9 Florida State at Boston College (8 p.m., ESPN).

Saturday: Get plenty of rest, but don’t feel pressured to tune in to the early games if you’re not directly affiliated with a playing team. Mow the grass. Pet a bodega cat. Something. If anything interesting happens it’s gonna be in the form a weird upset and you’ll be alerted by your sicker pals’ tweets. That Memphis–Bowling Green game should be your first stop (3 p.m., ESPN3), and should be given an uninterrupted half-hour of your time before the top 25 action gets under way at 3:30 (no. 14 Georgia Tech at no. 8 Notre Dame on NBC and no. 18 Auburn at no. 13 LSU on CBS). Maybe throw in some Utah State at Washington for the chance to watch Chuckie Keeton on national television, if one or more of these midafternoon games gets out of hand (5 p.m., P12N).

This article has been updated to correct the broadcast network for the Notre Dame-Georgia Tech game.

'The Grantland NFL Podcast': Midweek News and an Interview With Charlie Whitehurst