Power Up the Pony Express: Chad Morris and the Quest to Bring SMU Football Back From the Dead 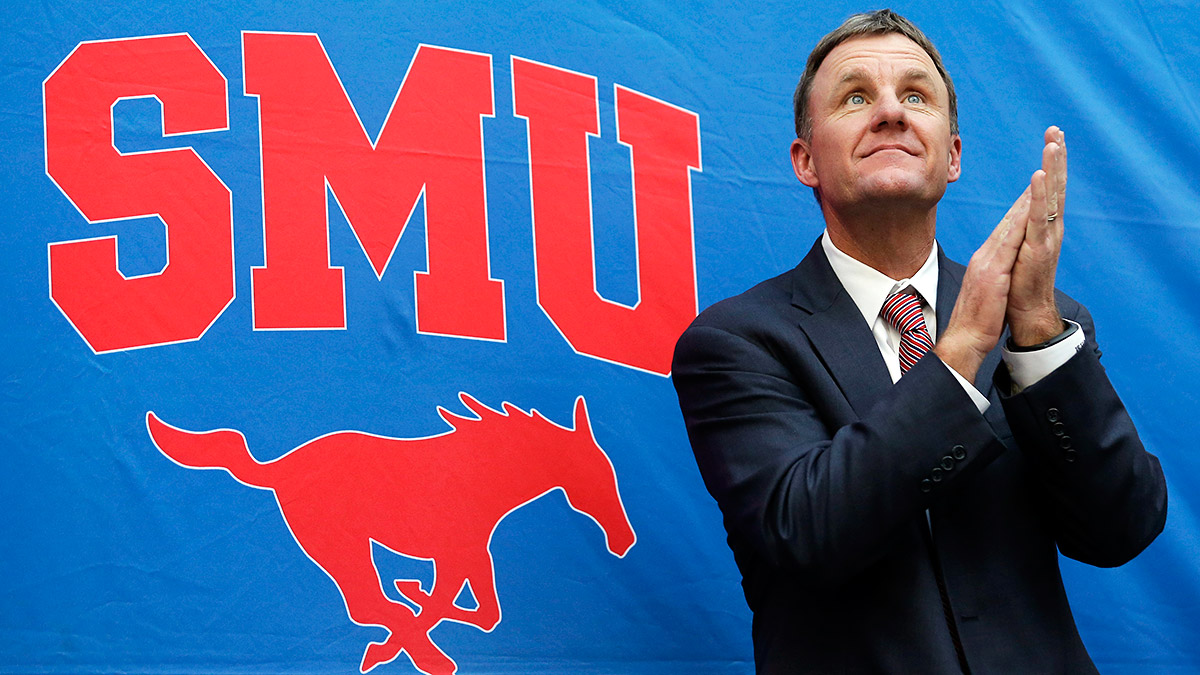 On February 25, 1987, Chad Morris was an 18-year-old senior at a high school in Edgewood, Texas, a small town 60 miles east of Dallas. That may seem like an arbitrary slice of minutiae with which to begin a story, but this happens to be a story about the football program at Southern Methodist University, and it is pretty much impossible to talk about SMU without referencing February 25, 1987, the day an NCAA enforcement official got so stressed out while announcing that the Mustangs would receive the proverbial death penalty that he literally fainted on the spot.

Three decades later, February 25, 1987, remains the defining day in SMU football history. Unless and until Morris rebuilds the Mustangs into a statewide and national power (and since we’re talking about Texas, the two are generally synonymous), it will continue to be so. And so this is one of the first things I ask the first-year head coach, who’s coming off four seasons as the offensive coordinator at Clemson, about when I speak to him on the phone. He tells me that he doesn’t remember where he was on that particular day, though he does remember the emotional weight of that period. He tells me that he grew up taking a bus to SMU games, and that he has distinct memories of those Pony Express glory days, and that he’s spoken to several of the players who were at SMU back then (including Eric Dickerson, who has criticized the school for its feckless approach to rebuilding and supporting the football program in recent years). He says that he is not ignorant of the past but that, in terms of a deeper historical analysis of the SMU program, he “can’t really go any further back than the era I just replaced.” And this is a perfectly understandable hedge from a coach who is seeking to move ahead rather than continually analyze the repercussions of a decision made when he was an adolescent preparing to attend Texas A&M.

But the death penalty is still there, in the subtext of everything Morris tells me. “We’ve gotta change the entire culture of the football program,” he says. “It’s gotta be a complete culture change.”

The death penalty is the reason the Mustangs are currently a member of the American Athletic Conference rather than, say, the Big 12; it’s the reason Baylor and TCU, who once played in the Southwest Conference against SMU, are now national powers, while the Mustangs went 1-11 in the AAC last season. Morris’s predecessor, June Jones,1 is a respected football mind who managed to rebuild SMU into a winning program for several seasons before succumbing to burnout two games into last year; Jones helped erase some of the ignominy of the past by leading the Mustangs to four straight bowl games from 2009 through 2012, but it’s up to Morris to see if it’s still possible to transform SMU into a team that can compete on the same level as TCU and Baylor and Texas and Texas A&M.2 He comes tailor-made for the job, since he is an innovative and absurdly energetic offensive mind who spent 16 years as a Texas high school coach before becoming the offensive coordinator under Dabo Swinney at Clemson. And so it’s fair to say the expectations at SMU haven’t been this high since Ron Meyer took the job in 1976, but that also means that if Morris fails, the death penalty could again begin to feel like an insurmountable obstacle. 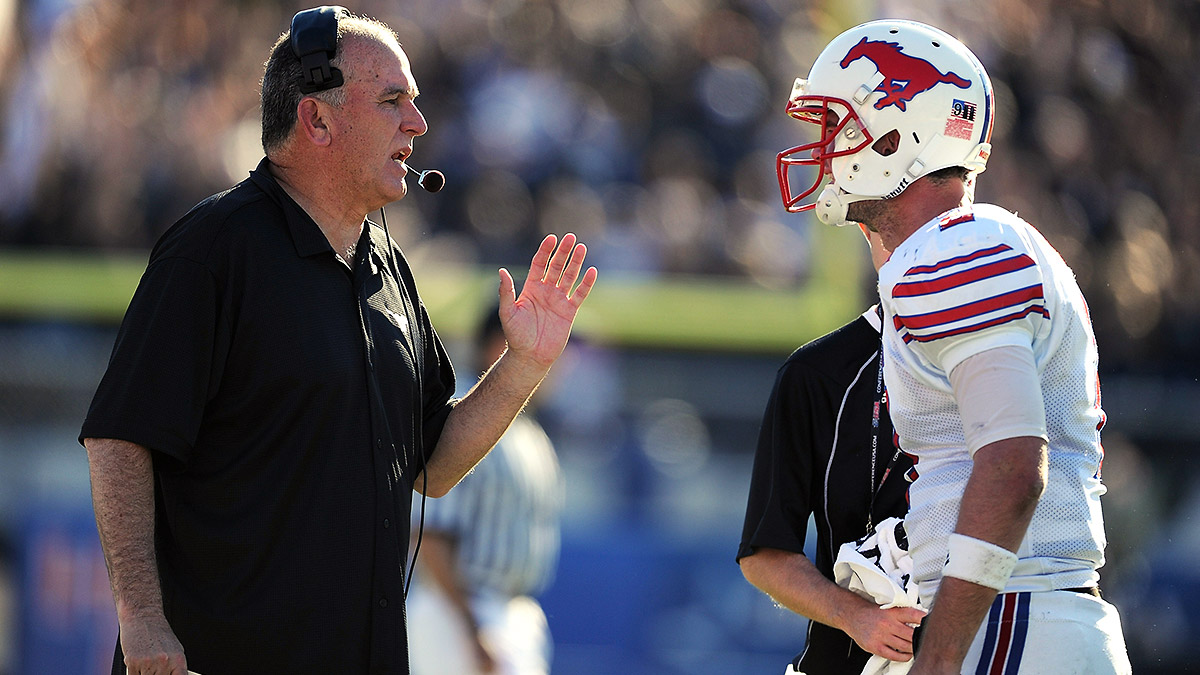 Rick Dole/Getty Images June Jones took SMU to four consecutive bowl games from 2009 to 2012 but resigned two games into the 2014 season amid the program’s renewed struggles.

In January 1988, SMU alumnus Forrest Gregg, a Hall of Fame offensive tackle for Vince Lombardi’s Green Bay Packers, became the first person to attempt to patch together the SMU program post death penalty. “How many years before the Mustangs return to the Cotton Bowl?” an SMU alumnus asked Gregg at his introductory press conference. “Five? 10?”

At the time, that didn’t seem like an unreasonable response. There remained a sense that SMU would be crippled for a certain period, but that eventually the program would rejoin the top tier of college football, because the same elements that had once drawn Meyer to the job remained in place (with the notable exception of out-of-control boosters reportedly willing to pay thousands of dollars to lure recruits). But then Gregg went 3-19 in two impossible years and begat Tom Rossley, who went 15-48-3; and Rossley begat Mike Cavan, who went 22-34; and Cavan begat Phil Bennett, who went 18-52; and Bennett begat Jones, who for all of his successes, wound up with a record of 36-43 during his time at SMU.

This is the job Morris, one of the most sought-after assistants in the sport, left Clemson to take. Like all of his predecessors, Morris is of the conviction that SMU is a sleeping giant, awaiting the proper person (and the proper commitment of money and resources from the university hierarchy) to activate it from its dormant state. But then, SMU has been referred to as a sleeping giant perhaps more than any other program in America: It has tradition dating back to the era of Doak Walker in the 1940s, and it has academic cachet, and it is situated in Dallas, a city that yearns for top-tier football at every level.

Here is an assistant coach under Meyer, according to David Whitford’s excellent book A Payroll to Meet: A Story of Greed, Corruption, and Football at SMU:3 “We were selling, ‘Guys, the one thing SMU has that nobody else has is Dallas, Texas!’”

And here is Chad Morris, to me, in August 2015: “No doubt this is one of the sleeping giants in college football. We’re in one of the top TV markets in all the world.”

Morris’s plan is to build the Mustangs from the grass-roots level upward; he brought in literally hundreds of Texas high school coaches to observe SMU’s spring practice in order to further his recruiting relationships. His philosophy is that there is so much young football talent in Texas that SMU should be able to recruit top-tier players, even after Texas, Texas A&M, Baylor, TCU, and Texas Tech finish battling for the best of that talent. Had he not been from Texas, Morris tells me, he probably wouldn’t have had much interest in the job. But he saw the potential, with SMU, to marry his connections with his own ceaseless energy. The overarching theme under Morris — who is open about his own Red Bull dependency — has been about tempo,4 about moving fast, about utilizing energy to overcome the malaise that has plagued SMU for those previous three decades. He talks about the way Larry Brown has rebuilt the basketball program at SMU; already, he is angling for time and patience and resources from an SMU administration that hasn’t always offered those things to the coaches who came before.

“This is a very defining time for SMU football right now — I think everybody understands that,” Morris says. “Everybody has got to lock arms and get it right. This cannot be a three years and out [attempt at rebuilding]. We used to beat TCU. We’ve gotta narrow that gap down.” 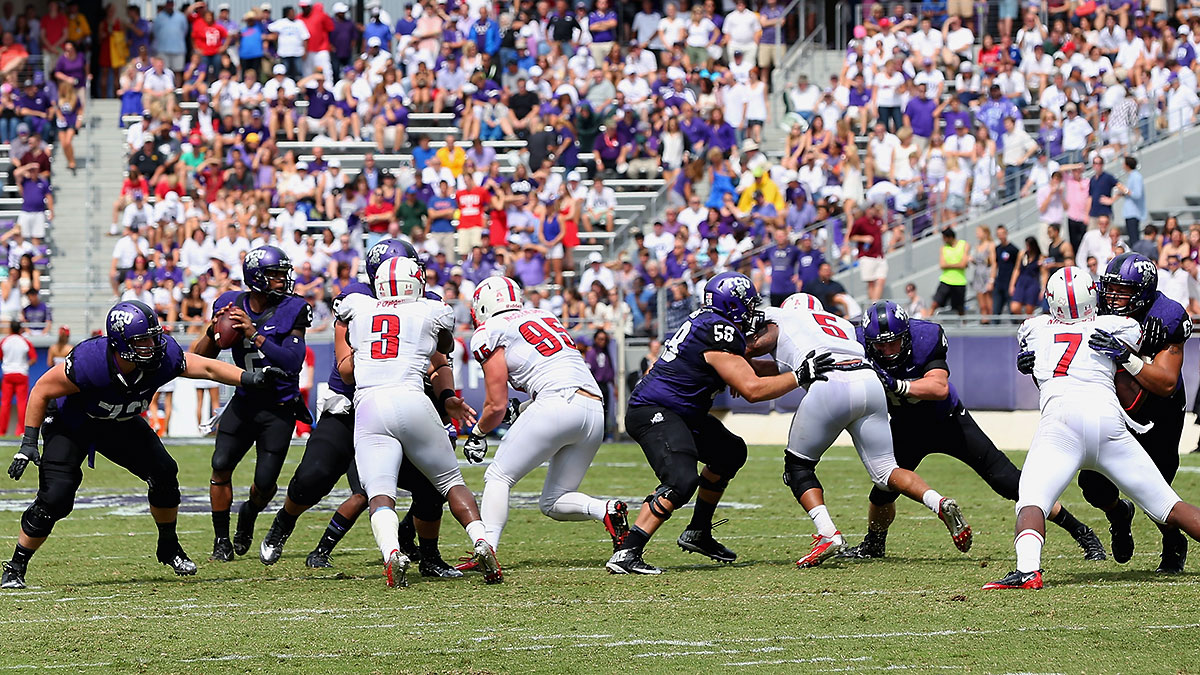 Ronald Martinez/Getty Images TCU went from afterthought to national-title contender in a matter of years, and the Horned Frogs’ path should be the rebuilding model that SMU seeks to emulate.

The model is right there, roughly 40 miles west on Interstate 30 in Fort Worth: From 1966 until 1997, TCU made precisely two bowl games. When the Southwest Conference folded in 1995, the Horned Frogs dropped into the Western Athletic Conference, and then worked their way into Conference USA, and then into the Mountain West, where they appeared destined to remain except for the fact that a revolutionary coach kept on winning so many damned football games. Six times in seven years between 2005 and 2011, Gary Patterson’s teams finished with at least 11 victories, and so when it came time for the Big 12 to expand, TCU was the natural choice. The Horned Frogs head into this season as one of the favorites to make the four-team College Football Playoff, which is a remarkable leap for a program that went 1-10 against WAC competition as recently as 1997.

At some point, the Big 12 will almost certainly consider expanding again. And so the clock is ticking for Morris; if he can win games like Patterson did, and if SMU can prove that it has found its way back, the Mustangs could make a viable case that they once again belong in a Power 5 conference. This September, SMU will play TCU in an early-season nonconference matchup,5 a rivalry game that’s largely been dominated by the Horned Frogs in the post-death-penalty era.6 An upset this season would be an earth-shaking miracle; either way, that game, as the Morris era progresses, will serve as one of the primary measuring sticks for an SMU program that is still seeking a way to slough off the burden of February 25, 1987. If it doesn’t happen this time for SMU, then maybe it proves once and for all that the death penalty is as determinative as its name implies.

‘The Jonah Keri Podcast’: Benjamin Hochman on the Cardinals, the Rockies, and the State of Journalism

Mixed-Up Confusion: The Puzzling Reality of Not Knowing How to Feel About the Yankees