Denver’s Dilfer: If the Old Peyton Manning Never Comes Back, Can the Broncos Defense Carry Him? 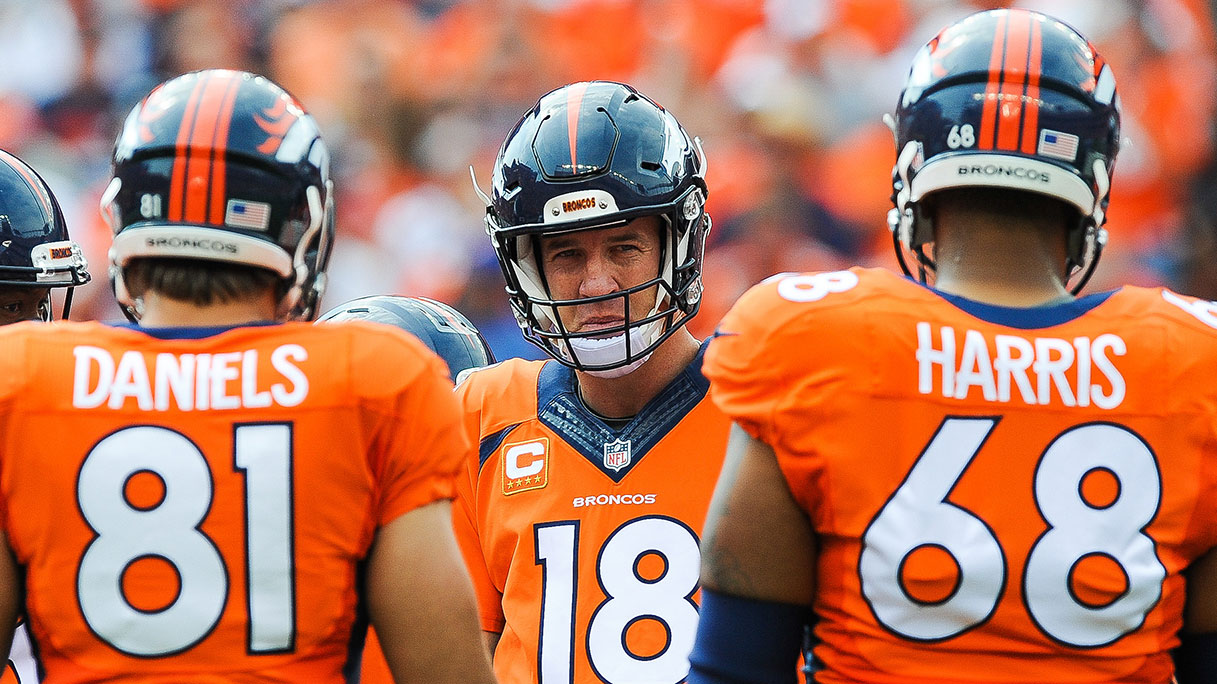 When Von Miller and DeMarcus Ware collided behind him late in the fourth quarter, Joe Flacco must have breathed a sigh of relief that, for once, he wasn’t involved. It was a rare respite against a Denver defense that looks ready to cause backfield havoc all season. The pass-rushing hydra of Miller, Ware, Shane Ray, and Shaquil Barrett certainly did just that in the season opener, helping the Broncos win a 19-13 slugfest.

It still feels blasphemous to even type these words, but after Sunday’s defensive dominance and Denver’s struggles behind center, we have to ask: Might Peyton Manning become something like Trent Dilfer 2.0, a below-average quarterback who’s carried to the Super Bowl by a ferocious defense? The answer to that likely hinges on Manning, his health, and his continued adjustment to new head coach Gary Kubiak’s system. Because as Baltimore found out on Sunday, this defense looks like it’s up to the task.

When you take into account the 51-yard interception return by Aqib Talib1 and Manning’s pick-six, Denver’s defense actually outscored Baltimore’s offense. A sample size of one is obviously limiting, but when that data point comes against a 2014 playoff team with Super Bowl aspirations of its own, it’s hard not to come away impressed.

The Broncos arguably have the best cornerback tandem (Talib, Chris Harris Jr.) and best set of outside linebackers (Miller, Ware) in the NFL, along with an underrated inside linebacking group (Brandon Marshall, Danny Trevathan) and solid starters along the defensive line. On Sunday, Denver’s relentless pass rush forced Flacco into short throws that were instantly immobilized by sure-handed tackles. Ware and Miller combined for eight quarterback hits, and a stout run defense held Justin Forsett to zero or negative yards on six of his 14 rushing attempts. Marshall repeatedly sliced past would-be blockers, recording three tackles for loss and doggedly buffeting the line of scrimmage.

What’s more, the backfield bombardment came against one of the best lines in the NFL. Ware and Miller, especially, will occupy the nightmares of Baltimore offensive tackles Ricky Wagner and James Hurst (who replaced a concussed Eugene Monroe after the first drive). Denver pressured Flacco on 50 percent of his dropbacks, by far the highest rate among all quarterbacks in Week 1. Flacco finished with a 13.1 QBR,2 and Denver held last year’s eighth-highest-scoring team to 173 yards — in other words, fewer than San Francisco’s Carlos Hyde accumulated during his romp on Monday Night Football. The Broncos picked up two sacks, but against a less-decisive quarterback it easily would have been a half-dozen. “I don’t think we ever got those guys out of a rhythm,” Flacco acknowledged after the game. “They were able to play downhill in the run game, they were able to get after the quarterback without really any repercussions.” 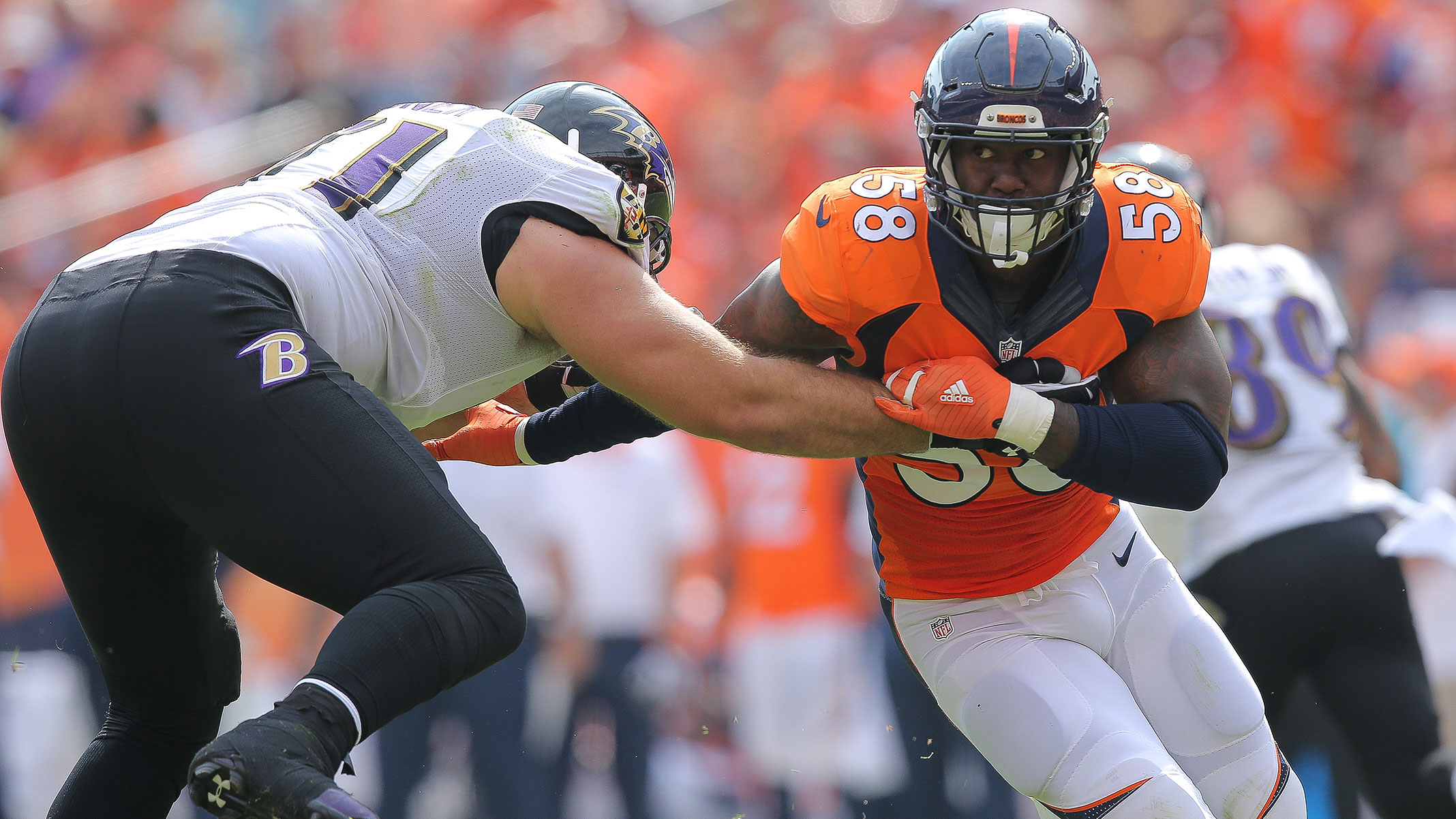 It was a promising debut for new defensive coordinator Wade Phillips, who has installed a 3-4 scheme that has produced top-10 defenses in Houston, Dallas, and Buffalo. Like Dan Quinn’s system in Atlanta, it’s a simple one-gap defense in which defenders have the opportunity to attack with abandon. It seems like a good fit, as you don’t need bells and whistles when you have Denver’s enviable trifecta at outside linebacker: the still-quite-productive future Hall of Famer (Ware), the in-his-prime All-Pro (Miller), and the filled-with-promise rookie (Ray).

Having such talent on the outside allows the Broncos to blitz at a league-average rate and still disrupt the opposing quarterback. Denver’s defense was quietly the fourth-best in DVOA last year under former coordinator Jack Del Rio,3 and the difference this year might end up being the added depth: In the first half of 2014, Miller had nine sacks and Ware had eight, but they slowed down as the year went on, adding only five and two sacks, respectively, in the second half.

This year the pieces seem to be there to prevent a similar kind of late-season fallback. In April, Denver traded up to select Missouri’s Shane Ray — who was projected as a top-10 pick until he was charged with marijuana possession — with the 23rd overall pick. Ray’s 14.5 sacks last year set a school record and led the SEC, so it wasn’t a surprise when he immediately began to contribute this preseason. More unexpected was the emergence of Shaquil Barrett, a 2014 undrafted free agent from Colorado State who spent most of last season on the practice squad but earned a spot on this year’s 53-man roster after compiling four preseason sacks (among the team’s league-leading 20). Although Ray and Barrett only saw 14 snaps each in their first regular-season game — compared to Miller and Ware’s 44 apiece — the young duo spent their fair share of time in the backfield, and those numbers will likely converge as the season progresses.

As part of the NFL’s circle of life, these young pass-rushers arrive right as Manning’s grave is being dug. Until the neck injury that caused him to miss the 2011 season, it seemed like Manning would be around forever. He had always played like a machine, so couldn’t you just update the operating system? Granted, there have been tough moments in his career, like struggles with Bill Belichick’s defenses and the Super Bowl humiliation against the Seahawks, but each seemed to be a temporary setback. Until Sunday, I’d never truly felt sorry for Manning. He was sacked four times, twice by budding star C.J. Mosley, and some of the hits he took were hard to watch. The Ravens defense is very good, but each hit was a violent reminder that the end is finally near.

We may be in a sports world where a knuckleballer can win the Cy Young, but Manning’s evaporating arm strength poses a legitimate problem. Players retire because their physical skills have declined, regardless of their mental acuity, and Manning was already fading down the stretch last season. His arm may be the weakest in the league, limiting Denver’s route trees and making it harder to neutralize pressure behind a work-in-progress offensive line, but it’s not unserviceable: He twice overthrew Emmanuel Sanders in the end zone Sunday. Manning will likely become the fifth player to reach 3,000 passing yards in a season at age 39 or older, but his declining skill set means the Broncos will likely have to rely on their defense to win games.

The schedule certainly doesn’t get any easier: The Broncos play the Patriots, Colts, and Packers this season, and the AFC West will be no cakewalk. Yet — a scary thought for opponents — the Denver defense wasn’t even at full strength against Baltimore. T.J. Ward, often a safety in linebacker’s clothing, returns from a one-game suspension this week, and run-stuffing defensive end Derek Wolfe will return once he serves a four-game ban. Still, it’s not unthinkable that Denver could miss the playoffs if Manning continues to struggle. Just ask last season’s Bills and Texans squads if having a great defense guarantees a postseason berth.

Tonight’s trip to Arrowhead Stadium will only enhance the season-long narratives surrounding the Broncos. The Chiefs offer up another defensive challenge, and if Justin Houston and Derrick Johnson fluster Manning en route to a Kansas City victory, be prepared for the eventual calls for Kubiak to free Brock Osweiler from behind the “In Case of Emergency” glass. Of course, Manning could turn it all around and play like he always has, but until that happens — and especially if it never does — what could be the best defense of his career will have to keep the Super Bowl dream alive.