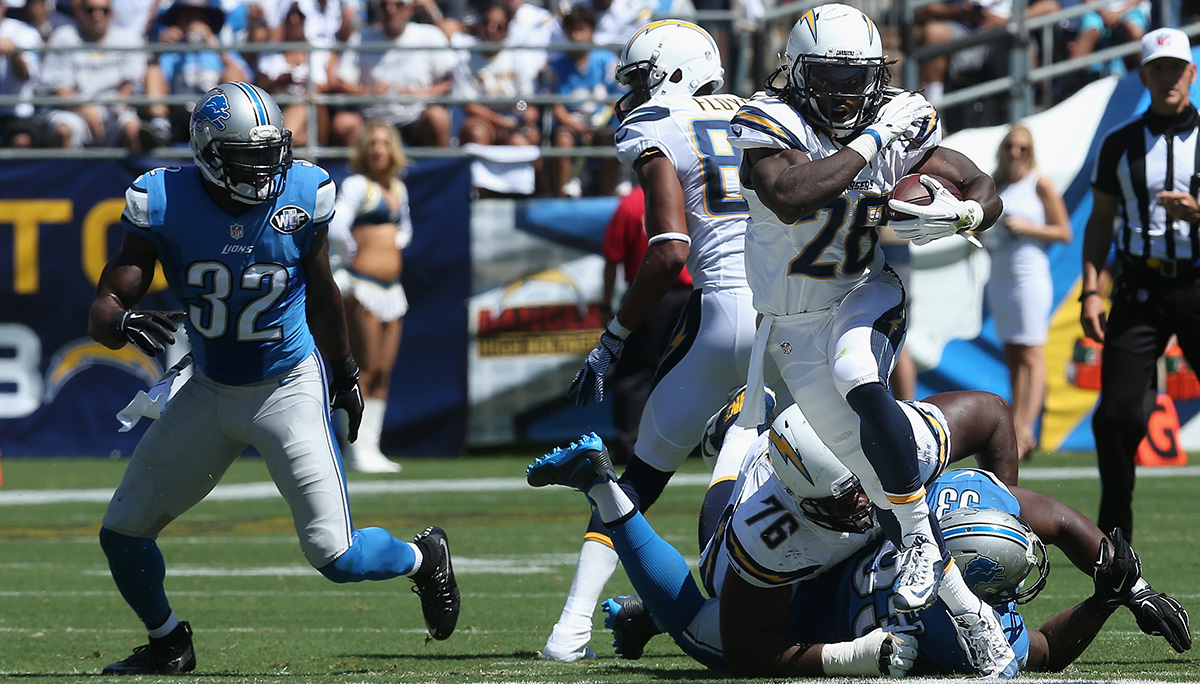 Last season belonged to the rookie wide receiver. The 2013 class had some early success — DeAndre Hopkins and Keenan Allen still look like its best products. But the pass-catchers who emerged in 2014 were the best in history. Of the 20 highest receiving yardage totals by a rookie since the merger, four of them came last year. Only Randy Moss and John Jefferson had more receiving touchdowns as rookies than Odell Beckham Jr. and Mike Evans. And while the Dolphins’ Jarvis Landry wasn’t piling up the yards, he had the fifth-highest reception total among rookie receivers since 1970.

When an anomaly like that occurs, it’s going to cause a stir. Many wondered how, in the age of the spread offense, college receivers could acclimate more quickly to the pro game than ever. Some attributed the phenomenon to the growth of 7-on-7, some to an uptick in pass attempts, and others to a concentration of talent that had more to do with randomness than a developing trend. When surveying this year’s class — from draft day through Week 1 — the wave-of-talent argument gains steam. Bears rookie Kevin White missing at least the first six games hurts this class’s ability to make an early impact. But one game into the season, there’s a new class of skill position standouts: 2015 could be the year of the rookie running back. 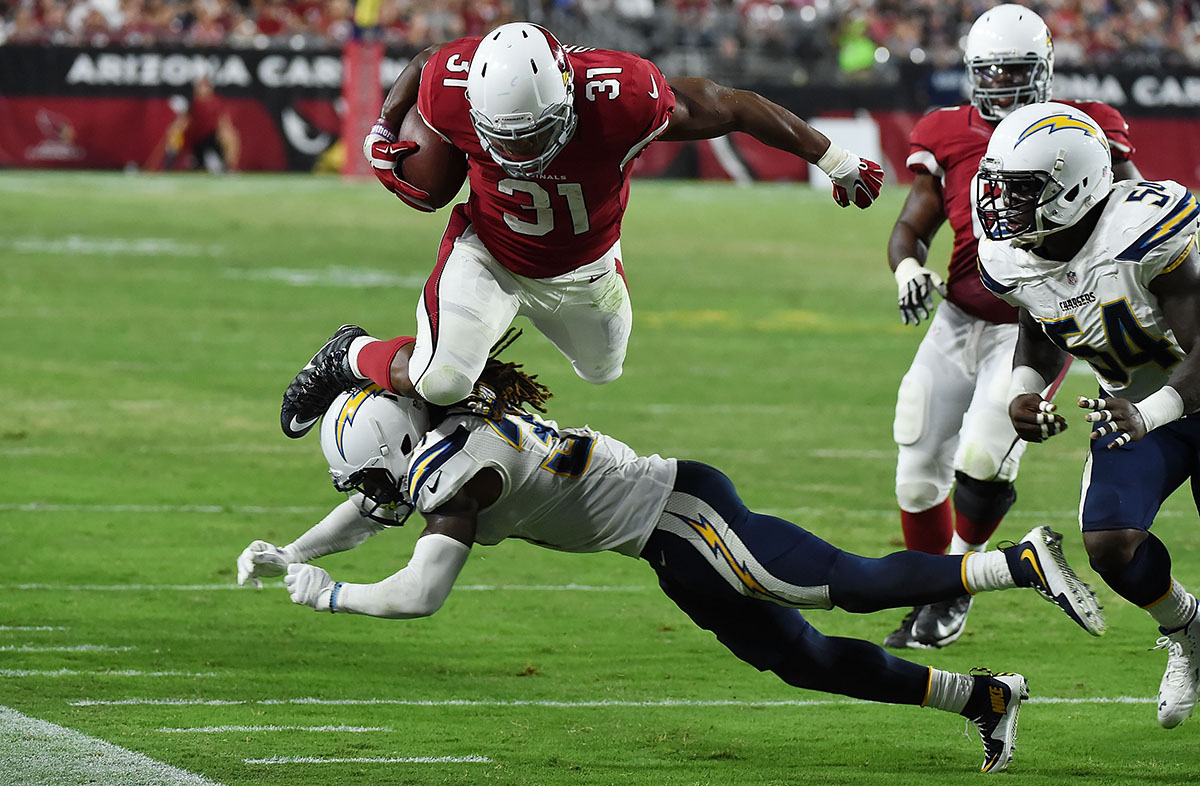 Any argument in favor of this becoming a memorable running back class starts with draft position. Two drafts had come and gone without a back going in the first round. The last one had been Trent Richardson in 2012, whose subsequent face-plant in Cleveland and Indianapolis may actually have spooked teams out of taking a running back in the first round. That streak ended this year, when the Rams surprised just about everyone by taking Todd Gurley with the 10th overall pick. Melvin Gordon wasn’t far behind — he was snatched up by the Chargers, who sent a 2015 fourth-round pick and 2016 fifth-round pick to San Francisco to jump up two spots to grab Gordon at no. 15.

The days of Jonathan Stewart being taken in the first round only to take a backseat to DeAngelo Williams are over. A running back chosen in the first half of the first round will get his touches early and often — and with Gordon that appears to be true. He got 14 carries in Week 1, and although he managed only 51 yards, the former Badger looked more decisive than he had at any point in the preseason. And even though DeAndre Levy was on the shelf (and Ndamukong Suh is in Miami), Detroit still had a historically dominant run defense a year ago.

A first-round talent like Gordon is sure to see the bulk of the carries in San Diego — but what makes this class intriguing is the players further down the draft chart who are getting a crack at the lead role in their backfield. Tevin Coleman toted the ball 20 times for the Falcons on Monday night, and against a defense that finished seventh in run-defense DVOA a year ago, he looked damn good doing it. T.J. Yeldon carried the ball 12 times for a Jaguars’ team that spent much of the afternoon behind — he seems to be the undisputed no. 1 option in Jacksonville.

With Coleman, Yeldon, and Gordon, it looks like this class has three backs who — by design — are carrying the load immediately. But in recent years, that’s been increasingly less common. Since 2005, only three rookie classes have had three backs with at least 200 carries on the season; with even a slight increase in their use, Coleman, Yeldon, and Gordon would all figure to hit that mark.1 Gurley might be added to that mix sooner rather than later, too, as he is eased in after ACL surgery last November; Jeff Fisher declined to rule Gurley out for Week 2. Even if the Rams spend a couple of weeks easing him in, it’s likely that by season’s end, the no. 10 overall pick will be getting a majority of the work in St. Louis.

If Gurley does take the reins upon his return, that’ll mean four rookie backs getting the nod at the start of their respective careers. It’s been seven years since that many rookies got the no. 1 job.2 Kevin Smith, Chris Johnson, Matt Forte, and Steve Slaton all handled the majority of their team’s carries in 2008 — but even then, it took Ahman Green tweaking his ankle in Week 1 for Houston to turn the ball over to Slaton.

When Green returned to full strength, Slaton already had a stranglehold on the job. He finished with 4.78 yards per carry and 1,282 yards, the most of any first-year runner that season. Then–Texans head coach Gary Kubiak’s willingness to cede the job to Slaton that quickly was likely the product of seeing what his offense looked like with a 31-year-old Green as his no. 1 back in the preseason. For some reason — whether pass-protection, ball security, or some other malady — coaches typically seem hesitant to hand their running game to a more youthful option, even if it gives them some extra pop.3 Jamaal Charles remains one of the most maddening examples from recent years. Even as Charles was ripping off 6.4 yards per rush in 2010, the Chiefs were still willing to hand the ball to Thomas Jones — he of the 3.7 YPC at age 32 — 15 more times than Charles over the course of the season.

That was actually Charles’s third year in the league, but the point stands. There are plenty of instances when coaches, making what they feel are the best (read: safest) choices, hang on to a plodding back for a few games too long. Typically, it takes a chunk of the season for these discrepancies to become obvious. But on Sunday, this year’s rookies were already clamoring for a larger role. 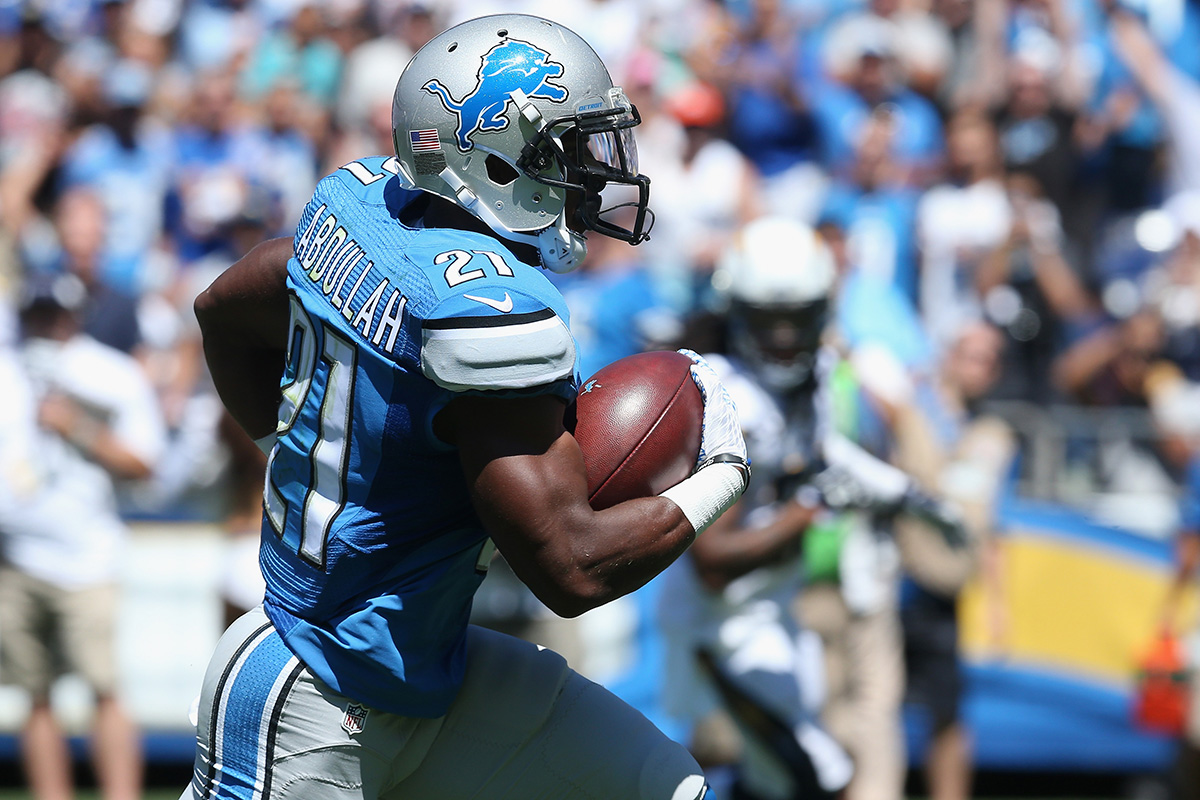 No one thinks LeSean McCoy is Thomas Jones circa 2010, but Karlos Williams exploding 26 yards for a touchdown on his first NFL carry was enough to make anyone stop and take notice. David Johnson was similarly impatient. On his first NFL touch, Johnson took a swing pass from Carson Palmer and scorched 55 yards down the sideline to put the game away for the Cardinals.

When it comes to a younger, more dynamic back showing his time has come, Johnson’s situation in Arizona is ironic. It was only two years ago that Andre Ellington was playing that role in Arizona, tearing off 5.5 yards a carry as Rashard Mendenhall plodded through the line 217 times that season. Ellington looked good before getting hurt Sunday, and there’s reason to think if he can remain moderately healthy — and if Arizona can get guard Mike Iupati back reasonably soon — he can be effective in this offense. The frustrating part is that in his absence, Bruce Arians appears content to go with Chris Johnson as the lead man in the Arizona backfield while David Johnson and his 55 yards per touch are relegated to a situational role. It’s hard to argue with many of Arians’s choices in Arizona so far, but the first game Chris Johnson runs into the line and falls down 15 consecutive times, it will be easy to see why Cardinals fans might be screaming at the TV. The same will be true for Lions fans any day now if Ameer Abdullah doesn’t start getting more work for Detroit. Abdullah got one more carry than Joique Bell for the Lions on Sunday, but as Abdullah keeps tearing off 24-yard touchdowns, it wouldn’t be surprising to see the gap between them start to grow.

Abdullah’s preseason made this predictable — it was obvious he’d leapfrog Bell before long. But what has a chance to put this 2015 class over the top is that even in cases that aren’t as clear, it’s not impossible to imagine a rookie winning out by season’s end. Buck Allen wasn’t spectacular in his nine carries against the Broncos — no one on the Ravens was — but he looked better than Justin Forsett. The same goes for Duke Johnson besting Isaiah Crowell in Cleveland.

Both Allen and Johnson are in similar wait-and-see positions. It may not have looked this way last week, against two of the better run defenses in football, but both the Browns and Ravens have the personnel up front to be strong running teams in 2015. And in both cases, their lead running backs are players who didn’t have much pedigree coming out of college. Forsett was a seventh-round pick on his fifth team before breaking out with the Ravens; despite being a highly touted high school player, Crowell went undrafted last year. With the production the Browns and Ravens (understandably) want from their running games, both Allen and Johnson may not have to wait long for their chances.

That’s the final piece of what could make this running back class one of the more important in recent memory. Last year, 14 rookie backs had at least 50 carries. That’s the most of any class since 2005, but it required a number of factors that no one could have predicted. Adrian Peterson spent 15 games away from the Vikings, Ryan Mathews went down in San Diego, Rashad Jennings got hurt after signing with the Giants, and Arian Foster missed his requisite three games in Houston. In only a couple of cases — Tre Mason in St. Louis and Jeremy Hill with the Bengals — did the takeover happen organically.

This year, it’s reasonable to think that 14 figure is in reach. There were 10 rookies who had at least four carries in Week 1, and that’s without Gurley or any major injuries to entrenched starters. By the end of the year, it’s not crazy to imagine that five or six rookies could have the lead spots in their respective backfields. After a deluge of receiving wunderkinds, the young runners may finally be grabbing the ball back.