C.J. Mosley Is Filling Some Big Shoes for Baltimore 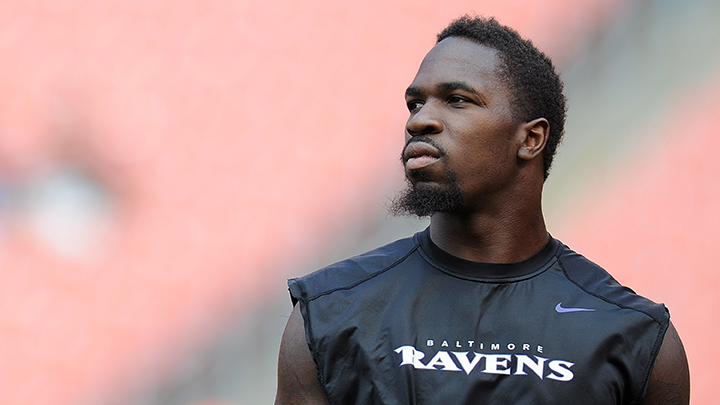 Anybody who saw the Colts beat the Ravens on Sunday had the privilege of watching one of football’s rising young stars survey the field on every snap before making pinpoint decisions. Yes, every week that Indianapolis wisely spreads the field with three receivers, Andrew Luck looks more and more like Aaron Rodgers. But I’m thinking about another player who is turning heads, and he was part of the defensive unit that held Indy’s then top-scoring offense to 20 points.

Rookie inside linebacker C.J. Mosley made three impact plays in Baltimore’s 20-13 loss and … well, let’s just get the inevitable Ray Lewis comparisons out of the way before they have too much time to fester. Both players are two-time All-Americans from football factories who were selected in the first round of the NFL draft — Lewis was 26th out of Miami in 1996 and Mosley was 17th out of Alabama in 2014.

It might be irresponsible to go any further than those cosmetic similarities when comparing a future Hall of Famer with a rookie who has played five games. But after a nondescript start, Mosley has produced two consecutive strong performances that place him firmly in the competition for Defensive Rookie of the Year.1 He is Pro Football Focus’s third-ranked inside linebacker, behind Luke Kuechly and Bobby Wagner, and has helped the Baltimore defense be the third-stingiest unit in the NFL by allowing only 16 points per game.

Mosley is a true three-down linebacker — he has missed only two defensive snaps — who is every defensive coach’s dream. He’s more interested in wrapping up ballcarriers than recklessly launching himself around the field. His goal is to make tackles, not SportsCenter highlights.

Sixth in the league with 49 tackles, Mosley is effective at shedding blocks and plugging running lanes. Even his big plays are workmanlike. On the opening drive against Indianapolis, Mosley drilled Jack Doyle, a tight end turned temporary fullback, in the hole to help prevent Ahmad Bradshaw from picking up the needed yardage on fourth-and-1. Later in the first quarter, Mosley charged forward on a rare blitz, quickly covering 15 yards before delivering a textbook hit on Luck, whose pass flopped into the hands of Haloti Ngata. And in the third quarter, Mosley intercepted a deflected pass on the goal line, the third Indianapolis drive he directly extinguished.

(Mosley does need to improve in pass coverage. Multiple times against Indianapolis, he recognized a crossing pattern too late, allowing one touchdown catch to Dwayne Allen and another to T.Y. Hilton that was negated by penalty. Earlier in the season, he also struggled to contain passes to slippery running backs Giovani Bernard and Le’Veon Bell.)

Although the Colts are the only elite offense they’ve faced, the Ravens have held four of their five opponents to their lowest point totals of the season.2 Back in July, Robert Mays explored how Baltimore was continuing to rely on its defense, noting the amazing fact that the franchise finished no worse than sixth in defensive DVOA from 1999 to 2011. After falling to 19th in 2012, the Ravens rebounded to seventh last year and now are fifth in 2014.

Despite Baltimore’s strong start, this doesn’t seem like one of the imposing units of yesteryear under Chuck Pagano, Rex Ryan, Mike Nolan, or Marvin Lewis, each of whom parlayed his success running the Ravens defense into an NFL head-coaching gig. Those coordinators had the luxury of two future Hall of Famers — Ray Lewis and Ed Reed — while Dean Pees has been forced to restock the unit.

Devoting that draft capital to one side of the ball doesn’t guarantee an immediate turnaround. Jernigan has missed most of the season with a meniscus injury and Brooks has seen limited action, while Simon was signed off the practice squad Tuesday by the Texans. The most disappointing recent draft pick has been Brown, who played less than 20 percent of the Ravens’ defensive snaps last season and has been a healthy scratch in the first five games this season.

All this makes Mosley’s ascension that much more important. Smith, Dumervil, and Canty are on the wrong side of 30, as are Baltimore institutions Terrell Suggs and Ngata. And while the Ravens hope that level of experience is helpful, as the 3-2 squad fights for a playoff spot in the congested AFC North, Mosley and other young players will need to emerge for long-term success.

He has helped the Baltimore front seven lead the charge this season, with the Ravens allowing only the Colts to break the 100-yard rushing mark. Williams is a stout presence in the middle alongside Ngata, and Pernell McPhee has impressed as a hybrid player in the 3-4 front. Suggs, Dumervil (who leads the team with 3.5 sacks), and Courtney Upshaw rotate as bookends on the line of scrimmage.

The secondary hasn’t wowed, which is probably why the Ravens’ performance has improved as the amount of ground they need to cover has shrunk. In the red zone, Baltimore has limited quarterbacks to an anemic 33.3 passer rating (the Giants are second-best at 73.7), allowing only six completions on 20 attempts with two touchdowns and two interceptions.

Baltimore has talent at cornerback with Jimmy Smith and Lardarius Webb, who returned against the Colts after a preseason back injury, but the depth is lacking, especially with Asa Jackson placed on short-term injured reserve with a sprained toe. The defense’s biggest weakness is at safety. It’s an odd state of affairs after Reed’s longtime reign. Elam has seen consistent playing time, but aside from some hard hits, he has struggled in pass coverage.4

If Baltimore continues to keep points off the scoreboard despite some vulnerabilities (the Ravens defense is 29th in sacks per dropback and tied for 26th on third-down conversion percentage), it will likely be because Mosley has grown even more comfortable in his role. There are signs his pass coverage will improve, including two Indianapolis screens on which Mosley evaded an armada of blockers to make the tackle.

Those are the plays that result in praise from his veteran teammates. Suggs told the Baltimore Sun, “I think he played phenomenal. We all got to catch up to him. He was out there making a lot of plays. We knew the kid was special coming in. That’s why we brought him in here. He had a hell of a day.” Ngata added, “He’s awesome, I love having him back there. He hustles up and makes all the tackles. It’s a lot of fun having him here.”

Those two have played with some all-time greats, and you don’t have to squint too hard to see Mosley become one of the best defenders in the league. The purple jersey certainly helps.

Is Bruce Bochy One of the Best Managers in Baseball History? (Yes. Here’s Why.)