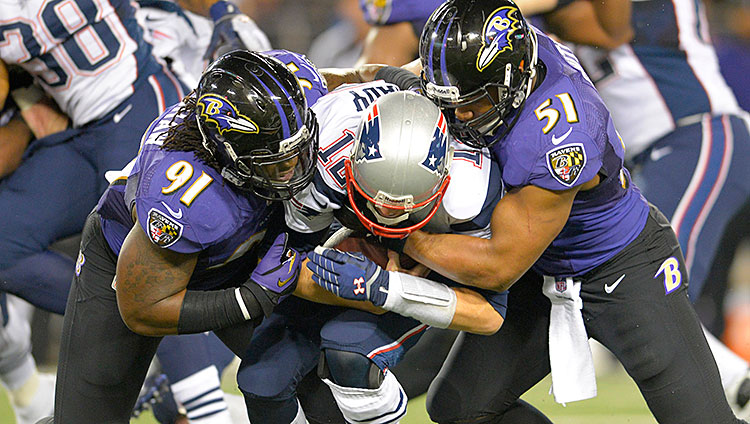 It’s hard to question Ozzie Newsome. The Hall of Fame tight end turned general manager has run the Ravens for 18 years now. It’s a stretch that includes eight 10-win seasons, two Super Bowl wins, and two more trips to the AFC Championship Game. Outside of New England, no franchise has been steadier in the past two decades. But where the Pats have found greatness through consistent reinvention, the Ravens have gotten results by staying the same.

The Ravens have been defined by defense for as long as they’ve been a franchise. After taking eventual Hall of Famer Jonathan Ogden with Baltimore’s first ever pick, Newsome nabbed undersized Miami linebacker Ray Lewis 22 picks later. Ogden would be the best player in the history of some franchises. He wasn’t even the best player in the 1996 Ravens draft class.

Lewis not only set the tone for every Ravens defense in the early 2000s, but for what the Ravens would be for the next 15 years. The 2000 Baltimore defense, including Defensive Player of the Year and Super Bowl MVP Lewis, is the one thrown into GOAT discussions, but the Ravens’ stretch throughout the decade should be viewed in its totality. From 1999 to 2011, Baltimore’s worst finish in defensive DVOA was sixth. Again, that’s worst. Since then, they’ve fallen out of the top 10 once, in 2012, when they still managed to have enough talent to hold it together for five games and win a Super Bowl.

The concentration of talent for Baltimore has always been through the middle of its defense. Even as Lewis crept past 30, Ed Reed and Haloti Ngata developed into the best players at their positions. When it came to defending the middle of the field — against the run or pass — the Ravens had it handled.

Reed is gone. Lewis is too. Ngata is 30, and his struggles to stay healthy seem to get worse every year. Forced to consider how to remake the new era of Ravens teams, it seems like Newsome is relying on a dependable recipe.

In 2013, that approach made plenty of sense. It was actually Joe Flacco and the offense that won Baltimore its second ring, while the defense, for the first time, lagged behind. The Ravens’ first four picks that spring were on the defensive side, starting with players framed as Reed and Lewis replacements in Matt Elam and Arthur Brown.

The defense made a comeback last year, more because of Newsome’s other moves than anyone from that draft. The horribly underrated Daryl Smith, in Baltimore on a one-year deal, was excellent at inside linebacker. A now-infamous fax-machine snafu landed the Ravens Elvis Dumervil, who led Baltimore’s pass rush as Terrell Suggs eased his way back from injury. Baltimore finished seventh in defensive DVOA, a return to its top-10 ways.

It wasn’t quite so smooth on offense. A year removed from his Super Bowl MVP, and with $30 million guaranteed in hand, Joe Flacco had maybe the worst season of his career: a personal worst 6.4 yards per attempt, 10 more interceptions than he’s ever thrown, and a completion percentage creeping even further below 60.

The running game was worse. Baltimore finished dead last in rushing DVOA, averaging an appalling 3.1 yards per carry. There were few sights in the league more miserable than Ray Rice slamming into the line for another two-yard gain.

Changes on that side of the ball were inevitable, and they happened — sort of. Gary Kubiak is the Ravens’ new offensive coordinator, bringing with him the zone-based, play-action passing game we saw for years in Houston. But aside from the shakeup at the top, most of Baltimore’s remodeling on offense was done with a chisel rather than a sledgehammer. Kubiak brought Owen Daniels with him from Houston, Steve Smith decided to finish out his days in Baltimore, and in a move that quietly might make a huge difference for the Ravens’ offensive line, Newsome traded a 2015 fifth-round pick to the Bucs for new center Jeremy Zuttah.

The Ravens’ free-agent splash came in the form of bringing back dependable 27-year-old left tackle Eugene Monroe, who was brought in midway through last year for a late-round pick. But even with Monroe locked up for a reasonable price and Zuttah in to play center, most had the Ravens looking for offensive line help early in this year’s draft. What they actually did surprised exactly no one.

Even with Daryl Smith and Arthur Brown on the roster, Baltimore pulled the trigger on C.J. Mosley, the consensus best inside linebacker in the draft. Leave it to the Ravens to take the best defensive player around and figure it out later. It’s a trend that kept up in the second round, when Baltimore took Florida State defensive tackle Jimmy Jernigan. Fellow Seminole Terrence Brooks, a strong safety many expect to pair well with Elam, went a round later. Five months after finishing in the bottom three in offensive DVOA, the Ravens spent their first three picks on players in the middle of their defense.

It’s been nine years since Newsome spent a first-round pick on a player at a skill position (Mark Clayton in 2005). When the Ravens haven’t gone defense early, they’ve looked to the line. This felt like a year, though, when helping out the $120 million quarterback might be the priority. The way it looks now, Baltimore seems to think a new pivot point along the offensive line, a healthy Dennis Pitta, and Kubiak are enough.

Instead of trying to catch the offense up with his defense, Newsome decided to do what’s worked. The Ravens are primed to lean on their defense the way they always have. Last week, John Harbaugh said he expects his defense to “top five, at the worst.” Again, it’s hard to question Ozzie Newsome, but it better be.