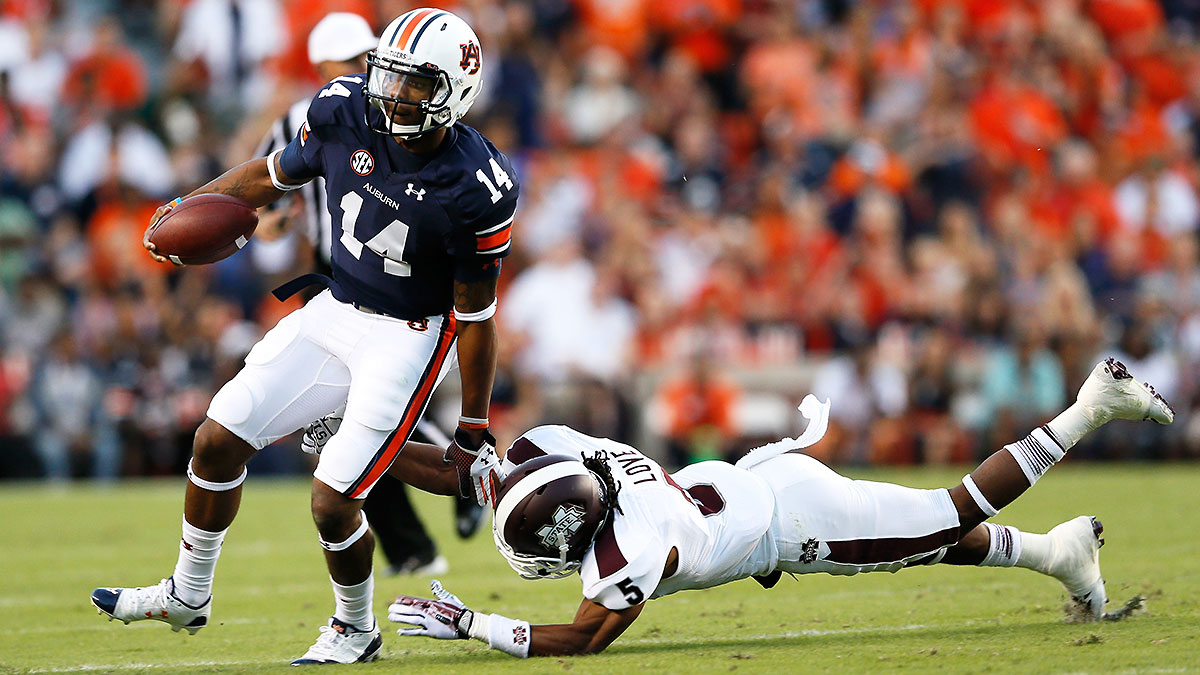 A week after the season’s first real cannon fire was exchanged, the SEC West continues its square dance, while the Big 12 teams continue their valiant attempts to swing their partners right the hell out of the playoff. (What? Your hoedowns don’t have cannons?)

The game: no. 2 Auburn at no. 3 Mississippi State

How to watch: GameDay is Starkville-bound this weekend, so get to cowbell country plenty early or settle for the 3:30 p.m. broadcast on CBS.

The rivalry that once produced a 3-2 game — a contest that still stands as the most tragicomic sporting event we have ever witnessed — now brings in two undefeated, top-five programs and gives us our best look at Auburn since last season’s national championship game.

How to watch: Drag your pontoon boat up onto the Brazos bank outside McLane Stadium, or tune to ABC/ESPN2 at 3:30 p.m. (Yep, the two top-10 matchups are both 3:30 kicks. Yep, this bites.)

Story line: Fresh off an upset of Oklahoma, the Horned Frogs come hunting Bear pelts. Study up with Matt Hinton on the erratic career trajectory of TCU quarterback Trevone Boykin, and wonder how Baylor’s defense, ranked fourth in yards allowed per play, will hold up against its most severe offensive test so far.

How to watch: Scale the dusky heights at Kyle Field in College Station, or tune in to ESPN/WatchESPN at 9 p.m.

BYU at UCF (7:30 p.m. Thursday, ESPN/WatchESPN): This week’s lone Thursday tilt looked a lot better before the season-ending injury to Taysom Hill, a deprivation for all viewers, not just for BYU fans. It also looked better than anything UCF has done all year. Not that we’re suggesting you do something reckless like flip to the NFL instead. There are poor kids who don’t have any football at all on Wednesday nights — and we are those poor kids.

Washington State at no. 25 Stanford (9 p.m. Friday, ESPN/WatchESPN): It’s the offense that broke the FBS record for passing versus the nation’s stingiest scoring defense. You will watch, and while you may switch to San Diego State at New Mexico (9:30 p.m. Friday, ESPNU/WatchESPN) or Fresno State at UNLV (10 p.m. Friday, CBSSN) during the breaks, the Pac-12 is effing bonkers this season, so don’t stay away too long. 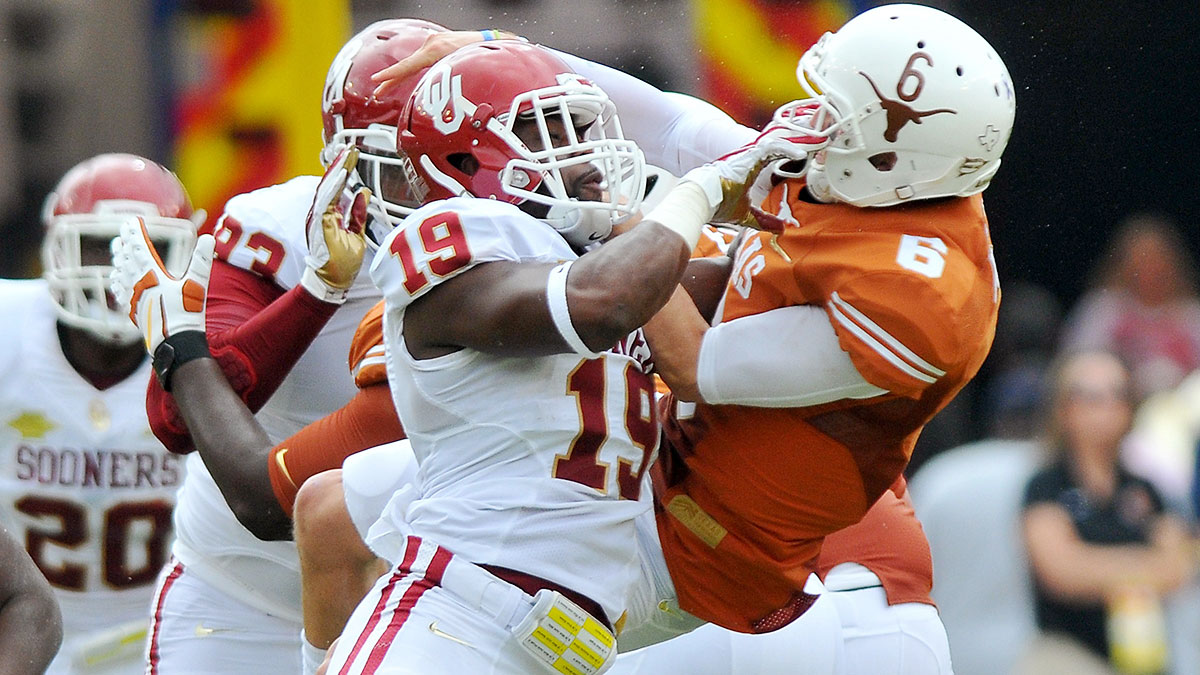 Highlights from a teeming Week 7 undercard.

Texas vs. no. 11 Oklahoma (noon, ABC): The Game We’re Not Supposed to Call the Red River Shootout Anymore Because That Will Just Fix Everything may not have the on-field luster of seasons past, but there’s always the Texas State Fair. New this year: deep-fried sweet tea, biscuit fries with chocolate gravy, and — hold up, they just now figured out kettle corn? Were they trying to deep-fry it this whole time?

Louisville at Clemson (3:30 p.m., ESPNU/WatchESPN): There’ll be points aplenty, probably, but the side of the ball you want to watch if you’re flipping channels is Clemson’s. Freshly hatched quarterback Deshaun Watson (and the Tigers’ thin line and young receiving corps) will face a Louisville defense that ranks second nationally in yards allowed per play, albeit against some less-than-sterling competition.

No. 13 Georgia at no. 23 Missouri (noon, CBS): With all the misery SEC East teams have inflicted upon the viewing public this season, it seems as though these two should carry records worse than 4-1, but here we are.1 The Tigers are the only East team without a conference loss, though it does help that their perfect record is a mere 1-0. Playing this year’s Gamecocks early will have that effect.

No. 12 Oregon at no. 18 UCLA (3:30 p.m., Fox): Marcus Mariota and Brett Hundley are beautiful gilded green-and-blue birds who’ll be flapping in one-winged circles before long at the rate their lines are guarding them: The Ducks and Bruins have allowed 15 and 22 sacks after six weeks. As viewers, it’s hard not to feel robbed of the artistry of which we know these two players are capable. As human beings, we’ll be busy cringing and sending healing vibes to their rib cages all afternoon.

USC at no. 10 Arizona (10:30 p.m., ESPN2/WatchESPN): In the run-up to this game and probably throughout the broadcast, you’re going to get a lot of reminders about what happened the last time Arizona beat Oregon (which was last season), and what Arizona did after that (which was lose by five touchdowns and change in the Territorial Cup). Then again, we got plenty of reminders about how bloody-minded Oregon had to be coming into last week’s game against Arizona, and we saw how that turned out.

Who’s undefeated and who’s unlikely to stay that way? This is one of those seasons when we sort of expect everybody to lose at least once, and with TCU-Baylor and Auburn–Mississippi State on the schedule, at least two more teams will fall from the undefeated ranks in Week 7. Others still standing and in action this week: Marshall (vs. MTSU), Florida State (at Syracuse), Georgia Tech (vs. Duke), Notre Dame (vs. UNC), Ole Miss (at Texas A&M), and Arizona (vs. USC). Also, depositing this here without comment: Undefeated Charleston Southern is playing at Vanderbilt.

Who’s winless and about to change all that? We’re somehow down to just four winless squads, and at least one is guaranteed to emerge victorious thanks to UMass and Kent State playing each other. Then again, after last week, it’s perhaps best not to count on UMass for aaaaaaanything:

Also oh-fering and clamoring for a single win: Troy (vs. New Mexico State) and Idaho (at Georgia Southern). Sorry about your hopes, Idaho.

Where’s my late game? The blessed phenomenon of midnight Hawaii kicks returns, with the Warriors hosting Wyoming in Honolulu.

Where might things get weird? At the Washington-Cal game, because Cal football is a tilt-a-whirl right now, or perhaps at the Alabama-Arkansas game, and not for any of the myriad reasons you might expect!

Are you familiar with the Razorbacks’ long-celebrated 11-0 1964 team, the one with Frank Broyles and Jerry Jones and Jimmy Johnson and Barry Switzer on it? The Hogs are reportedly honoring that team this weekend, and guess which other squad claims a ’64 championship?2

C.J. Mosley Is Filling Some Big Shoes for Baltimore

Absent From Class: Where Are the NFL’s 2014 Draftees?