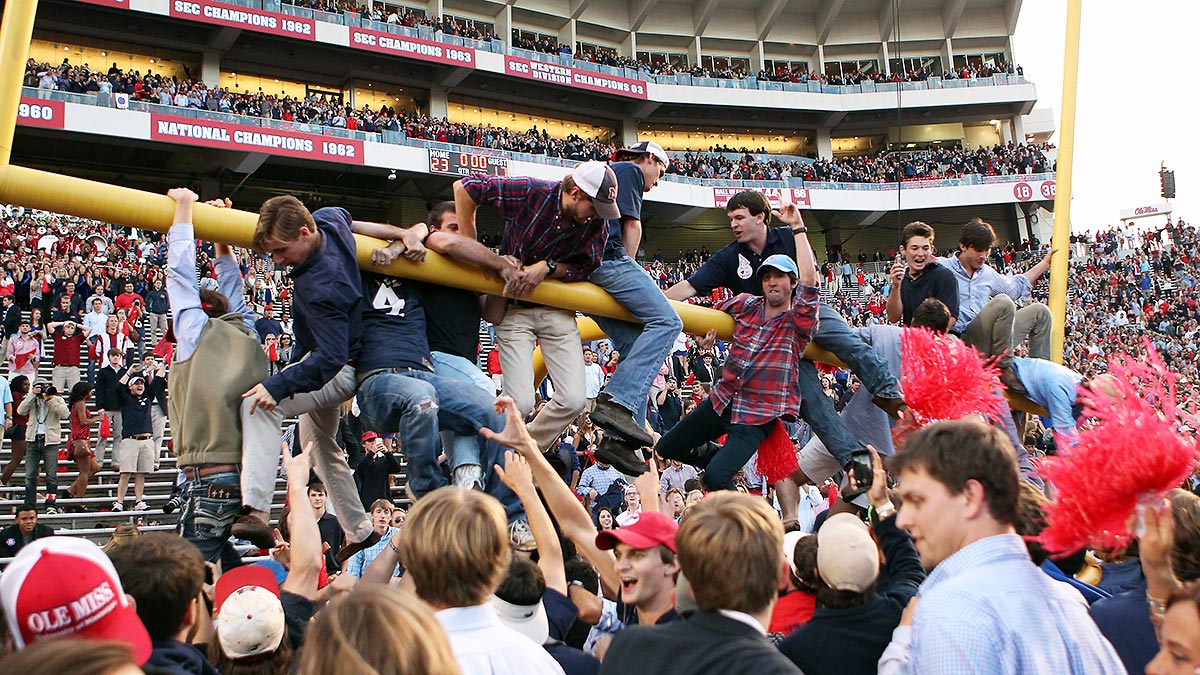 We had to wait longer for an upset-heavy week like this last year, and while the 2013 version was a hoedown from hell in the best possible sense, it also wasn’t quiiiiite as eventful. That week saw the demise of AP-ranked teams nos. 3, 6, 7, 8, 9, 11, 15, and 20, which seems like a lot until you hear that beginning with Oregon’s meltdown on Thursday night, 11 teams in the Top 25 went down this week, including half the programs in the top 10. Week 6, 2014, saw all kinds of records blow away like so many crisping leaves, made the Magnolia State the emotional epicenter of the sport with a historic pair of victories for its premier programs,1 and was bracketed by the kind of rollicking Pac-12 tilts that make us want to wrench our body clocks onto Pacific Standard Time between September and January.

It was all so very dizzying, and marvelous, and exhausting. Now what? What do you carry forward with you on a trip like this? We’re all traversing this spiritual Oregon Trail together, and we’ve just shot a shit-ton more buffalo than we can ever hope to carry back to the wagon.

There was endless jostling for attention this week. There were old friends like Todd Gurley, scaling ever greater heights and showing up his own quarterback with Georgia’s longest pass completion of the season. There were newer faces like Deshaun Watson, following Gurley’s footsteps up into the air and over oncoming defenders, and Miami safety Marques Gayot, tossing Georgia Tech’s punter to the ground like a bag of leaves. There was oversized cherub Jake Cotton, the Nebraska offensive lineman who false-started backward, and Washington State quarterback Connor Halliday, who broke the FBS record for passing and lost.

And then there was the diminutive Wildcat Kemp, who led Kentucky in rushing last season and Wildcatted around South Carolina on Saturday night in the process of single-handedly making us interested in the oh-so-close-to-undefeated Kentucky football program.

Here’s the last of his three touchdowns, after which he got toted off the field like a reclaimed rivalry trophy. Just look at the South Carolina players standing around in a miasma of inevitability. That’s the look of a bunch of guys who know they have to play this dude again next year and already are not looking forward to it.

Whose bright idea was it to adapt Michigan State’s “surly hillocks” defensive alignment2 for special teams play and for use on the Horned Frogs’ purple end zones?

The play was called back, lending it an ethereal quality that makes it all the more beautiful. Like Brigadoon. Frogadoon.

How many different kinds of fluids do you reckon this lady’s boots absorbed whilst in contact with the Hollingsworth turf?

Sweat, blood, and energy drinks, for sure. Spit, probably. Covertly deposited tobacco juice, almost definitely. Suppose the combination of infusions and emotions in Oxford on Saturday were enough to magick those boots to life like a fetching Sorcerer’s Apprentice broom, and they whisked themselves out a window that night, journeying across the country on an odyssey of self-discovery, only to learn that their heart was right where it had been left, in Vaught-Hemingway Stadium, and returned home, reunited with their mistress, and opened a chic little crafts storefront called, like, Jezebeads, or something? Written in a nice curly font on the awning. Maybe Harrington. Yes, lovely.

A malice-minded series of events like the one we’ve just been through can create its own ecosystem, obscuring certain events and throwing others into sharp relief based on nothing more than geography and the whims of linear time. We haven’t even gotten to Wisconsin’s loss to Northwestern, or USC’s to Arizona State (on a Hail Mary) (by the Sun Devils’ backup quarterback). Or to Memphis rolling Cincinnati, or the general state of UMass. But we will take the little time we have to honor:

• Syracuse head coach Scott Shafer, whose metaphor game embarrassed his own fan base.

• Ken Williamson, Texas A&M–Mississippi State referee, who didn’t even do the dumbest refereeing of the week, but who looked really funny while encapsulating the human condition.3

• And Illinois football, which lost some artillery to Purdue but gained this magisterial lede to follow it around forever.

Somebody has to drop peeled fruits into the mouths of the gods. These are your lives now.

Best of the day. #philosophy pic.twitter.com/OajfQ0vlQu