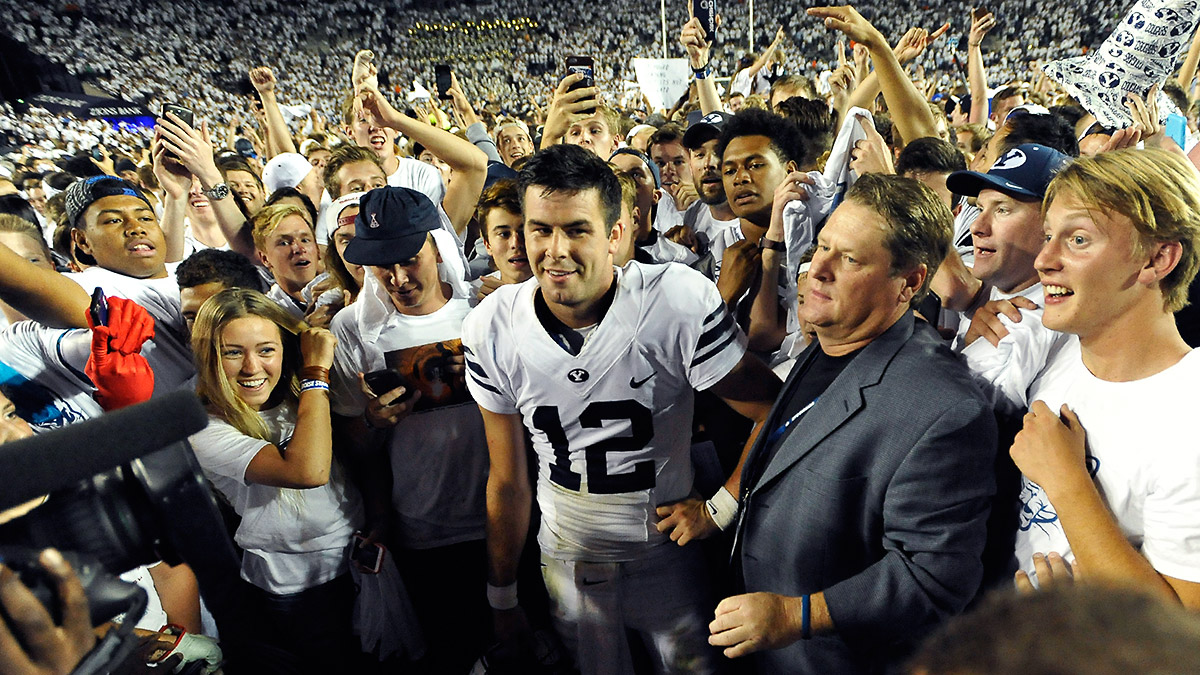 Here’s how goofy and anachronistic college football was 30 years ago: On December 21, 1984, undefeated Brigham Young beat a 6-5 Michigan team in the Holiday Bowl. At the time, BYU was locked into the Holiday Bowl, and the Holiday Bowl could not attract a better opponent for the Cougars because, I mean, it was the Holiday Bowl. And so the national championship was decided four days before Christmas at a second-tier bowl in San Diego, awarded by poll voters to a team whose opponents’ combined record1 was 61-72-3 — a team that played in the Western Athletic Conference2 against UTEP and New Mexico and four other teams with six wins or fewer, a team that required a last-minute touchdown to defeat Wyoming.

Imagine if this happened today. Imagine if there were no playoff or BCS, and imagine if a team like Boise State were to go undefeated and beat a second-tier Pac-12 program in the Las Vegas Bowl and then win the national championship by default after every other contender succumbed to at least one upset. Imagine the bedlam, the conniptions of the Finebaum universe, the angst of the major-conference commissioners, the utter fury of the ain’t-played-nobody message-board patriots. It’s completely unfathomable; it would never happen, because the system and the infrastructure surrounding that system wouldn’t allow it. It’s a minor miracle that it ever happened at all, and all these years later, the program at the center of that bizarre denouement remains on the periphery of major-college football, seeking a way back in, seeking another stroke of luck that might allow it to someday play for another national championship in less controversial fashion.

And two weeks into this season, there is no team in America that has embraced the power of luck quite like Brigham Young. 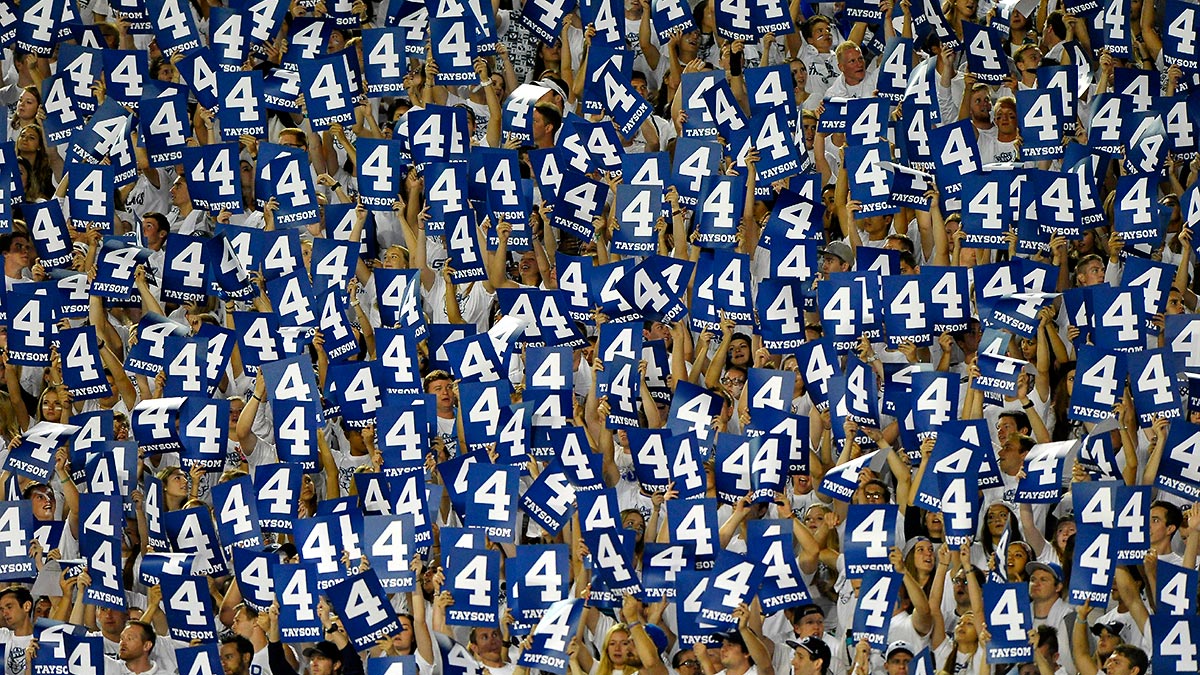 It is worth acknowledging the obvious here, which is that BYU isn’t like any other college football program in America, largely because BYU doesn’t resemble any other university in America. The run of success LaVell Edwards enjoyed in the 1970s and 1980s had a tremendous impact both on the future of college football — Edwards’s pass-heavy offensive scheme essentially prefigured the spread revolution of today — and on the public perception of the LDS faith, which is a large part of what BYU aspires to in fielding a major-college football team: The Cougars are a live-action advertisement for a religion.3

And so it feels fitting that BYU’s hero of the moment is a backup quarterback who is 22 years old and returned from a Mormon mission to Chile only three months before the season started. That quarterback’s action-hero name is Tanner Mangum, and as with some of his predecessors at the position, he chose to serve his mission before he played football; heading into the season, he was firmly ensconced behind an electric signal-caller named Taysom Hill on the depth chart, but then in the opening game against Nebraska, Hill suffered a season-ending foot injury.

What’s happened next, as you may already know, has been batshit crazy: Mangum threw a Hail Mary for the game winner against Nebraska, and then last Saturday against Boise State, he did it again; beyond that, he threw some beautiful bombs on the run against perhaps the best non-Power 5 program in the country. Suddenly, after years of dormancy and often just-plain-uninteresting football in the post-Edwards era, BYU is one of the most fascinating and joyful football teams in America, with a wide-open, fearless approach amid one of the toughest September scheduling runs in the country this season, and a coach named Bronco who crowd-surfs in the locker room. And it couldn’t have come at a more opportune time. 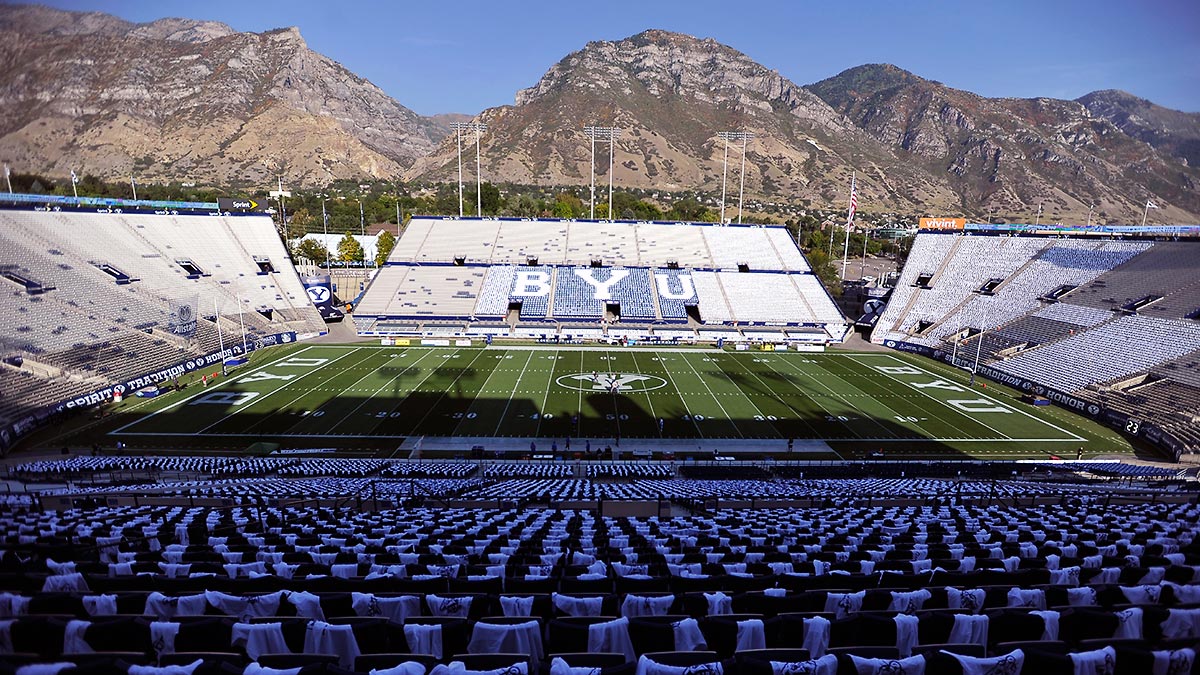 This is the Cougars’ dilemma: They are trapped in a curious no-man’s-land between mid-major football and Power 5 conference football, having abandoned the Mountain West in 2011 for independent status. At this point, I’m not sure anyone knows how this thing might resolve itself: Before the season, coach Bronco Mendenhall declared that BYU needed to work its way into a Power 5 conference in the next three years, but neither the Big 12 nor the Pac-12 seems anxious to extend an invitation. It’s possible that BYU will eventually have to swallow its pride and fade back into the Mountain West. Scheduling as an independent is a constant issue, which is why, in the next two weeks, the Cougars will face both UCLA and Michigan.

Mendenhall is attempting to alter the perception of BYU by recruiting at a higher level; for the past two seasons, the Cougars’ recruiting coordinator was a non-LDS hire who specifically targeted non-LDS athletes who could theoretically abide by the school’s Honor Code.4 But none of that is easy; given that a handful of players are constantly setting off on missions and then returning years later (as Mangum did), BYU also has perhaps the most unusual scholarship-numbers challenges in the country.

And so the system is generally working against BYU. But the thing that set Edwards’s teams apart was that (a) they won games, and (b) they were fun as hell to watch. The Cougars’ chances of achieving that latter notion in 2015 seemed dead when Hill hobbled off with an injury, but sometimes miracles happen, and it’s possible that Mangum is just as exciting as Hill was, and it’s possible that Mangum is comparable to the brilliant college quarterbacks that Edwards produced in the 1980s.

That whole run of success was, of course, perpetuated by another Hail Mary, thrown in the 1980 Holiday Bowl by Jim McMahon, a born contrarian who became one of the iconic countercultural sporting personalities of the 1980s. My guess is that Mangum isn’t any of those things, but two weeks into the season, he might be the most impactful BYU quarterback since McMahon walked away from Provo a defiant antihero. It’s hard to imagine that the Cougars will enter October without a loss, but if they do, they’ll become a legitimate playoff contender, with potentially only a neutral-site game against Missouri on November 14 standing between them and an undefeated season. It’s now or never: Either they Hail Mary their way out of no-man’s-land, or they sink back down to the middle.

A Tale of Two Halves in Atlanta

‘The Jonah Keri Podcast’: Evan Drellich and Jamey Newberg on the AL West