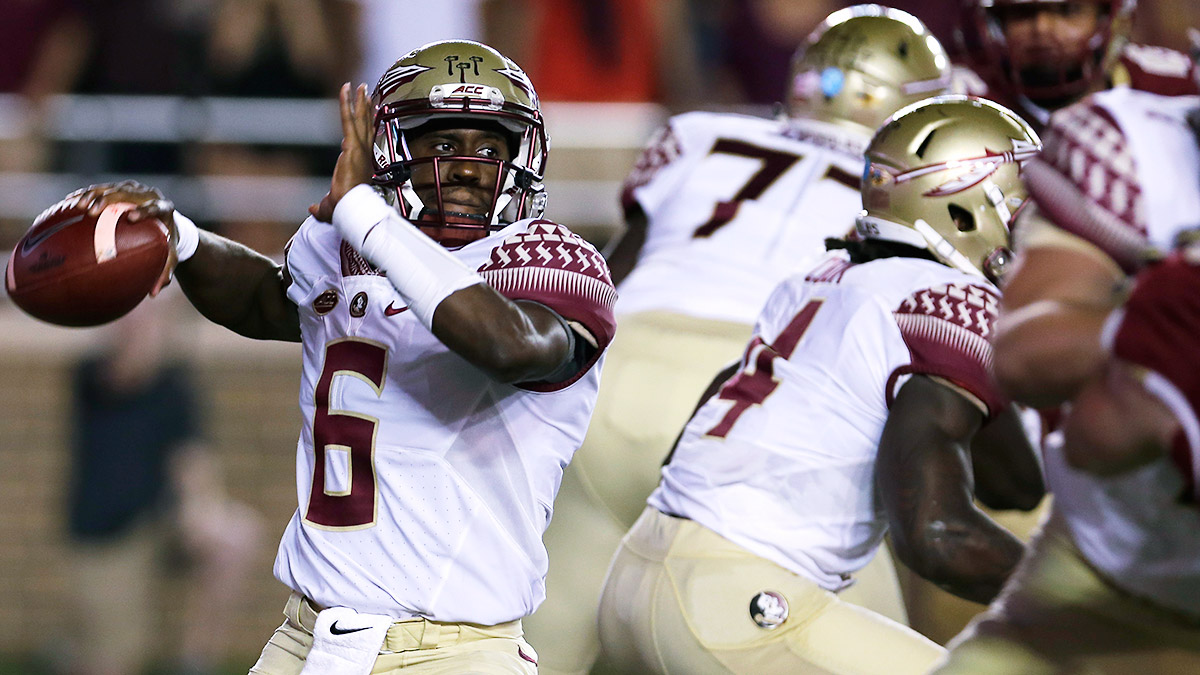 Before we talk about Everett Golson’s 2015 performance, let’s quickly go back to Florida State’s media day in August. Head coach Jimbo Fisher hadn’t named the winner of the quarterback competition between Golson, the Notre Dame transfer, and redshirt junior Sean Maguire, who were fighting to succeed Heisman winner and no. 1 overall draft pick Jameis Winston.

“I think your biggest concern … is how does he acclimate to the players?” Fisher said when asked what worried him about Golson’s transition. “That’s something as a coach you can’t force … when you transfer, it’s, ‘Hey, I’m not here to save everything. I’m here to help you and help our team and help this program. I’m just another guy.’”

That is both true and misleading.

Golson does not need to save the Seminoles, who won a national title two years ago and made it to the penultimate contest last year. With a stout defense and a running back with game-breaking ability, FSU was going to be good again in 2015 regardless of how the quarterback derby shook out. But for FSU to be good enough to bank another berth in the College Football Playoff, Fisher certainly needs Golson to be better than just another guy.

And through three weeks, it’s unclear whether he will be.

Sure, Golson lit up Texas State1 for four touchdown passes in the opener. But then he got sacked twice and was just 1-for-9 for a measly 6 yards in the first half against South Florida.

Entering Friday’s ACC opener against Boston College, Golson’s numbers were starkly different from the first half to the second:

So it looked a lot like progress when the 6-foot, 199-pounder opened against the Eagles with a perfect 5-for-5 drive that culminated in a 9-yard score to Travis Rudolph. Golson hit short passes to the flats, a 26-yard out to the FSU sideline, and a short throw over the middle for the score. He spread the ball around, hitting four different targets (three wideouts and a tight end). It was masterful.

And to top it all off, he threw a wicked block after handing off to Kermit Whitfield on a reverse:

That play made a big impression on Whitfield.

“It means he cares about his teammates,” Whitfield said. “And that he wants to win — throwing his body out there, sacrificing his body for me.”2

After piling up 83 yards and a touchdown on that first drive, FSU managed just 134 yards and no scores on its last nine drives.

Admittedly, that wasn’t all on Golson, as a few receivers dropped catchable balls and the offensive line struggled mightily to keep a clean pocket and get any kind of push against an underrated BC front. The lowlight for the young O-line?

The line’s instability led to Golson looking uncomfortable in the pocket and forced him to try to make plays with his feet. With the Seminoles backed up against the goal line in the second quarter, two BC defensive linemen had a free shot on Golson in the end zone for a potential safety. But Golson spun away from the flummoxed defenders, saw a lane, and sprinted out past the 20.

“We’ve got to protect better, we’ve got to do a better job in our protection game,” Fisher said after his team’s ugly 14-0 win. “We turned some guys loose up there. We have to get better up front so we can really find our true identity.”

Just how heavily Golson will factor into that identity remains to be seen.

Turnovers have always been Golson’s Achilles’ heel. He had 20 fumbles in 25 games at Notre Dame, losing 12 of them. He also threw 20 interceptions, including seven in a high-profile three-game stretch in which the Irish went just 1-2 after starting the 2014 season 6-0.3

Golson may have missed open receivers on deep balls, mishandled a few option plays, and looked shaky throwing on the run against BC, but he didn’t turn the ball over. And with FSU’s defense providing seven points of its own thanks to a Terrance Smith strip and a Jalen Ramsey scoop-and-score, that was enough to beat BC.

Whitfield said that Golson — who has not been made available for interviews since FSU’s media day in August — has been “a leader. He’s been getting us on the grind.” That’ll need to continue into the Seminoles’ upcoming bye week.

Because while Fisher was right when he said, after Friday’s game, “If they don’t score, you don’t lose. That’s for sure,” the converse is also true. If Golson can’t be better than just another guy, the Seminoles won’t be able to score a return trip to the College Football Playoff.