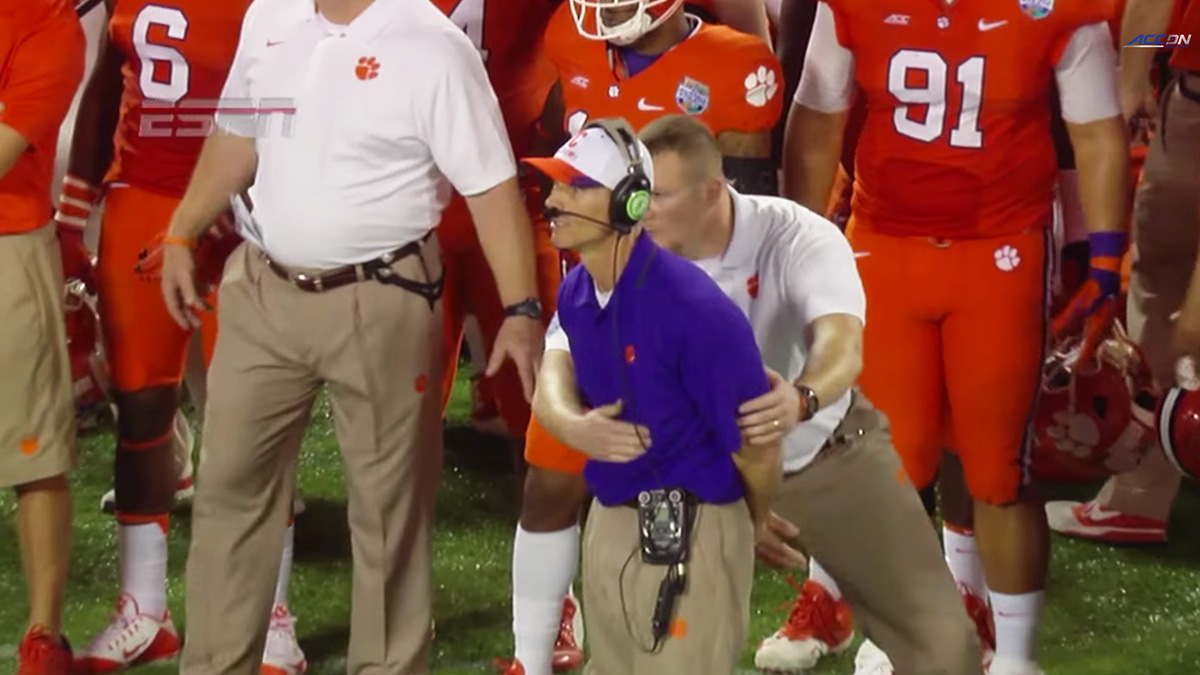 Clemson assistant strength and conditioning coach Adam Smotherman toils in relative obscurity no longer. Serving as designated personal get-back coach for Tigers defensive coordinator Brent Venables for most of the 2014 season, Smotherman rocketed to fame during the Russell Athletic Bowl against Oklahoma, when his charge got a little unruly:

With the score entirely out of hand en route to Clemson’s 40-6 victory, the announcing team and audience realized at about the same time that this was a more compelling matchup than anything on the field. It was exactly the kind of inadvertent show-stealing one might expect from a guy who played his final year of college ball at Vanderbilt under the inimitable Robbie Caldwell, and there’s a real art to it: a little bit chess, a little bit horse-training, and a lot of core strength.

Smotherman spoke with Grantland this week about his unusually specific game-day duties, his personal workout regimen, and whether he’s ever considered putting Venables on an elastic leash, like a rowdy toddler in a crowded mall:

So how did this become your job in the first place? Was there one particular moment when they said “OK, he’s your responsibility”?

Dan Brooks, our defensive tackles coach, has been around forever and he knows just about every official on the field, so they’d come up and talk to him, and I guess they’d told him Coach Venables was kinda getting out on the field and was getting in the way a little bit. [In 2013] he asked me and another guy that was working with us as a football volunteer at the time, Miguel Chavis, to keep an eye on him. And then this year against Georgia, our first game of the year, the official went directly to Coach Swinney and told him, “Hey, your defensive coordinator, we don’t mind him being in the paint a little bit, but he’s too far out there. You’re gonna have to wrangle him in.” So Coach Swinney just turned around and saw me and pointed at me and said, “You’re gonna hold him back for the rest of the year.” And I said, “Yes sir.” Every game from then on out I just started mirroring him.

It’s something that all strength coaches do, all of us here at Clemson: On game days we spread out, four full-time assistants and a grad assistant, and hold the players back and try and keep what we call good sideline integrity. But I had never been assigned to one coach specifically, so that was a first for me.

How does your background as a defensive lineman help you here?

Click here for all of our interviews with fascinating people from the worlds of sports and pop culture.
Well, you gotta have a good, strong base. Just keep a good, tight core, like you’re in the weight room. That, and good agility. You can’t get your feet crossed up, because he is a very elusive guy. I’m convinced that if he strapped pads on he could definitely still play linebacker. He is explosive, and he’s quick, and he’s running a mile a minute on the field. I’ve got to really be on my game to stick with him.

Have you ever been injured in this capacity?

Nothing so far. That’s why you’ve got to keep a good base, so you don’t get hurt.

What percentage of a given game would you estimate you spend getting Venables back out of the paint?

It’s really just when we’re on defense. When our offense is on the field, or special teams, he’s with the defense, making changes, drawing up different things that he’s seen and all that.

I don’t want to yank him back while he’s calling plays, but if the play’s about to go, then I’ve gotta go get him. And some officials are different than others. Some of them will come up to me — I guess toward the second half of the season they realized I was the Venables guy — and they’d come to me and say, “Hey, I don’t even want his toe in the paint.” And some of them would say, “He can have a little bit of paint.” There’s different preferences for different officiating crews, and they’ll help you out. They’re not out to get us or anything like that. They’re trying to maintain player safety and coaching safety, and I understand that. But the art behind that is figuring when the best time is to do that, and if you saw the Russell Athletic Bowl, sometimes there’s just no time left and I’ve gotta grab him.

Speaking of player safety, I’m not sure that even in a helmet and pads I would want to run into Coach Venables.

I don’t think so either. He’s still got it.

Have you ever considered fitting him with a bungee leash?

If I had a dollar for every time that has been suggested to me, I would be a rich man.

Suggested from within the team or from people outside?

Oh, everybody. Venables and I laugh about it.

No, I’ve never realistically considered that. Just get my hips low, sink my weight, and pull him back. He’s got other things to think about. My job is just to give him a sometimes aggressive little reminder of where he’s at and where he needs to be, or we’re gonna get a penalty.

Congrats to former Furman Coach Adam Smotherman on the Get Back Coach of the year award! #GBCoftheyear pic.twitter.com/AjW7rWeO45

And you got a trophy for doing it! Who made that happen?

We were at our banquet, and Coach Swinney got up on the podium and said, “I’ve got one more award that I didn’t put [on the program] that I want to present.” He said, “This guy is the best in the country at his exact job.” And said, “I’ve got a video for you.” And he pointed at the Jumbotron, and we turned around and the words pop up on the screen, “2014 National Get-Back Coach of the Year.” And everybody looks at me and we all just started laughing. They played the clip from the bowl with the announcers talking about my technique, and they had actually a legit trophy, with a guy doing the clean and jerk on the top. It’s pretty sweet.

As a strength coach and a guy who has a physically demanding job during actual games, what does your personal workout regimen look like?

I like to do a little bit of competitive powerlifting, so I train for that, doing squats and deadlifts. About two years ago I got a little pec injury, so I can’t really bench as heavy as I want to anymore. I still do the Olympic lift; I’m a big believer that to be a better teacher I need to be proficient at it. I’m not into long cardio or anything like that, but I still do sprint work, and I run some gassers, some hundreds, things like that. Still try to stay fast; if any of the players challenge me to a race, I want to at least hang with them.

A buddy of mine in college, we would get the itch to be meatheads sometimes, so we’d get a little harness that we’d hitch to the undercarriage of my truck, and we’d go to the park and pull my truck around in the parking lot.

What kind of truck?

‘You Mad, Bro?’ Revisited: What We Can Learn From the 2012 Patriots-Seahawks Matchup