David Beckham’s Retirement, and the Strangest Cultural Artifact He Left Behind 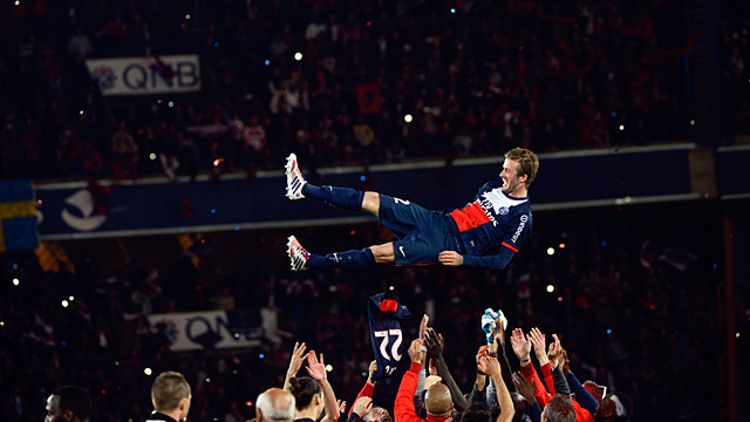 David Beckham’s playing career drew to a close a couple weeks back when he captained Paris Saint-Germain to a 3-1 thumping of Brest. The evening ended with a teary-eyed, perfectly coiffed Beckham getting tossed into the air by his teammates. It was the perfect way to remember him as a player — aloft in some other orbit, a beloved teammate who grew increasingly uneasy as one of the boys.

There were times over the past decade when Beckham cut a lonely figure, someone who got swallowed up by the symbol he’d become. This isn’t to overstate the burdens of fame or even to take those appearances all that seriously. But whether that light sense of man-apart ennui was in the service of perpetuating some sort of Becks-brand mystique or merely a kind of later-rationalized personal failing, the effect was to produce a new, sleekly modern kind of sports archetype.

Beckham the player never seemed driven by some unflagging, quasi-tribal loyalties, and he never displayed the pathological obsession with winning that makes fans so instantly nostalgic for the other British legends retiring this month — Sir Alex Ferguson, Paul Scholes, Jamie Carragher. And yet he wasn’t just vain or selfish, either — something you might have said about fellow retiree Michael Owen. It was central to Beckham’s paradox. A flashy global icon, the kind of person you can imagine holding a conversation with Tom Cruise. But a player whose skill set required lots and lots of practice with a dead ball, long stretches of rhythm-sustaining invisibility, teammates to latch onto those perfect passes.

At the height of Beckham mania, his symbol allowed fans to imagine wondrously impossible things. Most famously, there was 2002’s Bend It Like Beckham, wherein Becks, in absentia, inspired a young girl hemmed in by social norms and parental expectations to (per the Times of India) “finally curl that ball, bending it like Beckham, through the goalpost of ambition.” But this wasn’t the first attempt to think through the ramifications of a Beckham-shadowed adolescence. In 2004, Hong Kong filmmaker Adam Wong made When Beckham Met Owen, a low-budget coming-of-age tale about 13-year-old pals David (after Beckham) and Michael (after Owen) who are obsessed with (1) far-away English soccer stars, and (2) each other.

When Beckham Met Owen is one of the stranger examples of how Beckham’s popularity circulated around the world. It opens with glimpses into various, tiny Hong Kong apartments where fanatics — huddled together on futons, sitting on the toilet, hanging out on the phone — are all watching Real Madrid. As soon as Beckham scores a goal, young David calls Michael to relive what has just happened, and they explode in delight.

They are best friends — maybe a better conceit would have been When Beckham Met Neville — and they do everything together, sharing food, clothing, and a telepathic link on the pitch. The movie ostensibly builds toward an important match against a rival school, but it’s the introduction of a pretty classmate (who, for some directorial reason, spends the first half of the movie using a wheelchair) that drives a wedge between the brash, hypersocial David and the more introverted Michael. They’re still boys, more or less, and there’s an intimacy to their friendship — the wrestling and grabbing, the way a centerfold amuses David but horrifies Michael — that won’t survive puberty. This becomes clear when David catches Michael staring at him in the shower. It’s not just the girl who divides them; it’s Michael’s growing feelings of attraction to his friend, as well.

There’s something weirdly fitting about what Beckham seems to represent here, someone whose confidence and beauty somehow has those around him questioning themselves. Years later, Beckham would be recognized as a gay icon, or at least the rare professional athlete totally cool with courting any and all fans. When Beckham Met Owen isn’t actually about Beckham, but it picks up on this strange effect of his celebrity. The kids live a bootleg version of their heroes’ lives, piling atop each other after every goal because that’s what England does. They’re learning to be young men on afternoon trips to a guy in the city who sells soccer merchandise and jerseys out of his van; the other thing he sells are swimsuit posters.

Flopping in the NBA: A History of (Non)violence