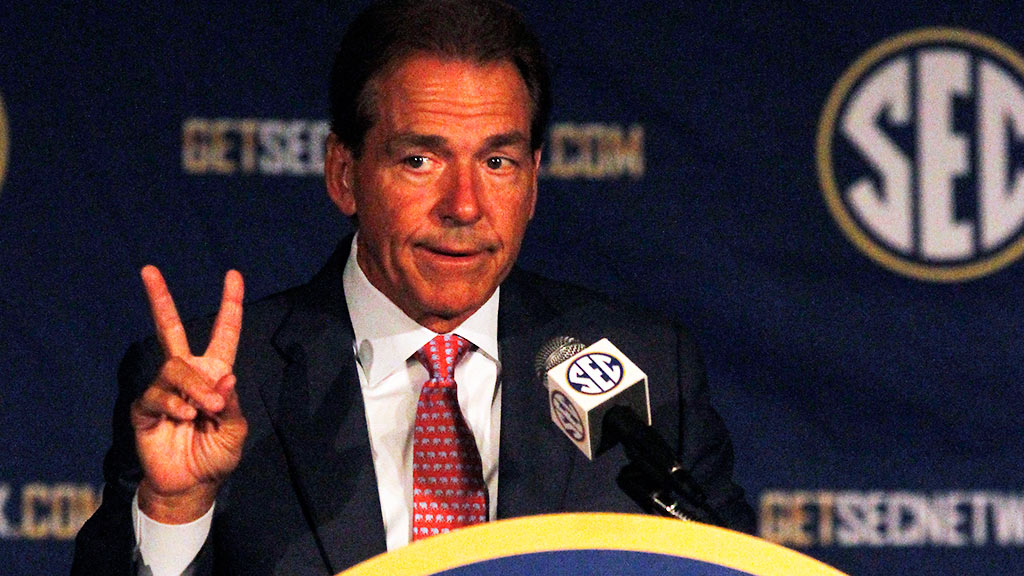 Hello! How are you? You look rested. Did you get frosted tips? Are you off having a summer? Us too. And while we’ve been doing that, planet college football has spun far enough around to get its denizens to the oil-slicked desert oasis that is summer media days (we are not astronomers), where Things Are Happening, Sort Of. As of today, we’re rattling downhill into the back half of the power conference shillfests, with the SEC and ACC wrapped, the Big 12 half-done, and the Pac-12 and Big Ten still to come.

If this doesn’t sound like a clarion call to sort out every picayune detail of what’s been going on in Hoover, Greensboro, and Dallas, that’s because it’s not. There are only so many tales one can stomach about how every team is improving ham-hand over ham-hand in the weight room, how every team leader has his hair braided by cartoon birds before every early-morning training run, and how every last program is dedicated to an ever-escalating standard of physical football (y’all know where we stand on this). But merciful heavens, are we bored. Media days are staged at this point of the offseason for some very good reasons, and also because the stagers know that journalists will be bored enough to purchase plane tickets to their events, on the off chance that a freshly minted head coach talks about his first job as an inseminator on a turkey farm.

Only once in the event’s history has a coach received applause from the media when he was done at the main podium: pic.twitter.com/NkK9lfl8OF

Summer football news is like a summer movie slate: allowed all manner of leeway as long as it sells popcorn. Here, let us hand-feed you fluffy kernels of news, interspersed with unpopped seeds of rank absurdity.

• There’s gonna be a Steve Spurrier movie! Grantland is owned by ESPN, and at this particular moment we could not be more pleased with that fact.

• Targeting rule changes! In a good news/weird news development: The 15-yard targeting penalty, which was previously enforced regardless of whether the call on the field was overturned — because never, ever forget that these people are making  things up as they go along just as much as the rest of us — is now itself overturnable, and there’s also now a strike zone on quarterbacks. Another salvo in the battle to legislate violence out of a demonstrably violent activity, this change introduces yet another element of subjectivity into officials’ weekly tasks; former Tennessee defender Stephen White explained on Twitter how easily this rule could go wrong.

• The face of A&M football at this year’s conference confab: Punter Drew Kaser.

• Chris Conley, quite operational: Starting with Georgia’s post-2012 bowl game, the Capital One tilt versus Nebraska, we began to believe that we could only see Conley with human eyes when he was making plays of 20 yards or more, and the receiver’s stat line bore this out: two receptions, 136 yards, two touchdowns. (The phenomenon reasserted itself in last season’s Georgia-LSU blockbuster.) Like seemingly every other offensive skill player in red and black, Conley was sidelined by injury late last season; he maintained his lofty position on the leaderboard in the hearts of the college football public by turning out a spectacular Star Wars fan film in his offseason free time. Conley announced his next project at media day: another genre turn.

• Here is your next wrecking ball. LSU’s true freshman running back Leonard Fournette is drawing unabashed comparisons to Adrian Peterson and Michael Jordan from his teammates and coach.

• The battle for the honor of handing off to T.J. Yeldon, et al. rages on. Nick Saban on Jacob Coker vs. Blake Sims:

• This only makes us more convinced that he’s a Heisman lock. Auburn quarterback Nick Marshall, notably absent from media day after being caught with penny-ante weed, will have sanctions against his person announced at some point. Imagine the spike in the two premier programs’ already-stellar recruiting capabilities when the Yellowhammer State finally legalizes pot. Imagine the fan art that will be created on Twitter to lure players to compete for national titles and enjoy herbal recreation at their discretion.

• Florida’s focused. Really, really focused. Giggle, but it never hurts to be reminded of the bubble in which we operate.

• Everybody’s good at something. The SEC has lost its title streak but continues to excel in people-watching:

The real winners this morning are the Auburn fans here to #TrollTide pic.twitter.com/qc6KIbDEfy

• Imagine a soothing breeze rolling off a babbling brook. ACC media day is the Fhloston Paradise of the power conference conventions, and the brook is Florida State’s Jimbo Fisher, who speaks in paragraphs and has much to discuss after last season, as you might have heard.

• Jameis Winston serves up alley-oop joke opportunity with side of drawn butter. The season cannot get here fast enough. Click through that link for a note on Winston’s own assessment of his football delivery mechanics, and a must-read anecdote on former Noles center Bryan Stork.

• Other teams besides Florida State were in attendance. While we’d rather see teams play killer schedules, Boston College’s Steve Addazio has a point here. Take the 2008 Florida team for which he served as an assistant: When you think of that national title campaign, the Gators’ games against Hawaii and The Citadel aren’t what you’re likely to remember first.

@Mark_Schlabach @DavidGlennShow Not to mention that Pluto is no longer considered a planet.

• Live from the ivory tower. ACC commish John Swofford believes that the Power 5 will get its way in the August NCAA board vote on major-conference autonomy, an unshocking forecast from a member of something called the “Power 5.” (Meanwhile.)

• No conference has a monopoly on goofiness, Exhibit A. The offseason makes whimsy-chasers of us all:

• No conference has a monopoly on goofiness, Exhibit B.

… So to recap, in the media guide that says "One True Champion" on its cover, the Big 12 says it will continue to recognize co-champions.

• Briles riled. While Baylor’s skipper’s point on Jimbo Fisher being too up in another league’s business is well taken, we would actually pay handsome cable subscriber fees to watch a call-in show called Art Briles Tells You How to Do Your Business. Don’t click away without appreciating this bit of backward execution by West Virginia quarterback Clint Trickett; it’s not easy to slugger-ify a guy who already goes by “Jimbo.”

• K’mon, man. Kliff Kingsbury has made great strides with his coachspeaking abilities in such a short amount of time as a member of the head coaching establishment.

• This seems like a good moment to make you all aware of this website. Kansas launched this tribute to linebacker Ben Heeney last week.

• NO, COME BACK, MORE BABY TORTOISES WEARING RASPBERRIES AS HATS.

Gary Patterson says he's made an effort to cut down on retweeting Earth Pics. … I don't know how this interview got here.

• The conference has upped its special effects budget.

• They’re not done. Follow along during the back half of the B12 talks, with Oklahoma, Iowa State, West Virginia, Kansas State, and Texas on deck for today.