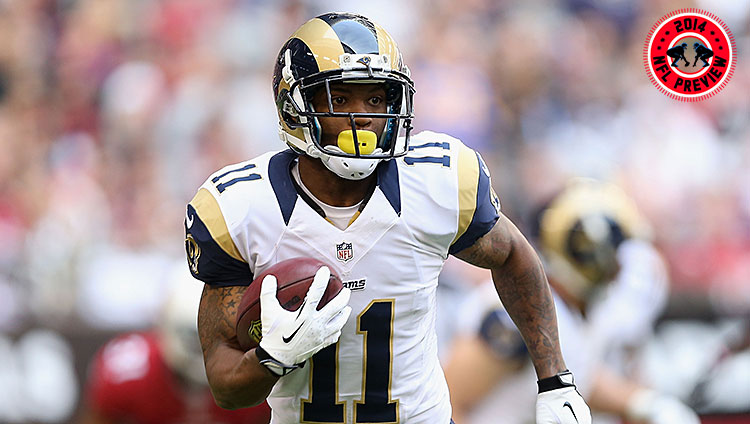 For the best NFL teams, the top layer of depth charts is easy to figure out, for the most part. Good teams don’t have many weak spots to begin with, and if there are any obvious holes as the offseason gets started, they’re usually taken care of with a chunk of money in free agency or an early pick come draft time.

There are times, though, when the options run out and one or two spots still hang in the air. That’s what training camp is for. Over the next month, all of our depth-chart questions will be answered. As a primer, here are five competitions to keep an eye on for teams with playoff hopes.

As long as Aaron Rodgers is breathing, the Packers should be the favorites in the NFC North. Even after missing seven games last year, he still made it back just in time to send Green Bay to the playoffs. He’s coming into this season with maybe the best offense he’s ever had. We all know about Jordy Nelson and Randall Cobb; the difference is in what Rodgers has to work with elsewhere.

The Packers’ only obvious hole on offense is at tight end. There were doubts about Jermichael Finley’s future in Green Bay even before a scary spinal injury ended his season. Without Finley, the Packers are left with three guys vying for the main job: Andrew Quarless, Brandon Bostick, and third-round pick Richard Rodgers. 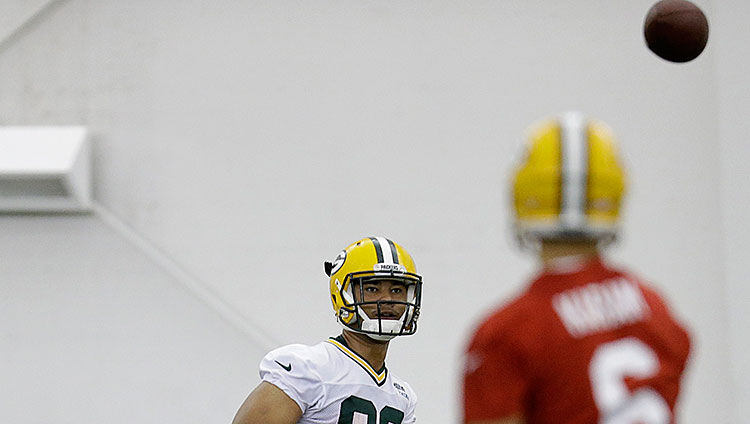 We’re about to find out what Green Bay is looking for out of the position. Quarless has been a secondary tight end for three seasons and was a reliable starter after Finley went down a year ago. His background with blocking in McCarthy’s offense makes him the safest choice.

Rodgers and Bostick are more proficient in the passing game. Rodgers’s time in a spread offense at Cal meant catching plenty of balls. He isn’t fast, but he’s a sure set of hands in the middle of the field — hands he showed off a lot during OTAs. Also, I’ve got to assume sharing a last name and alma mater with his quarterback can’t hurt his chances.

Bostick is the most intriguing option. Probably the most dynamic of the three, he had a four-game stretch in the middle of last season that included seven catches for 120 yards and a touchdown before breaking his foot against the Cowboys.

My guess: It’s boring, but it’s Quarless. There’s enough flash on the Green Bay offense that safe makes the most sense. Knowing this team, though, there’s a good chance injuries will get all three on the field in some way or another.

The Rams’ playoff chances may ultimately come down to quarterback and offensive coordinator, but fielding a competent group of receivers might help the cause, at least a little.

It starts with Tavon Austin, who touched the ball just 49 times on offense as a rookie, and most of those touches came on plays that felt awkwardly tacked on to what the Rams were trying to do offensively. The eighth overall pick in 2013 needs to be more than just an offensive gimmick. When you trade away a second-round pick to move up for someone, that guy should probably be treated like more than an obligation. I’d expect Austin to be a more ingrained part of the Rams’ offense this year. I also expect to regret saying that.

Even if we pencil Austin into the slot, there’s still the question of who joins him on the outside. It might be time to give up hope on Brian Quick, the Brandon Marshall–size receiver St. Louis took 33rd overall two years ago. Quick has 29 combined catches in his first two seasons, and he lost snaps to Austin Pettis and Chris Givens last year. Those two are listed as the starters right now, but the Rams have to be hoping there’s still something left in Kenny Britt’s tank. Four years ago, when Britt was on track for 1,000 yards and double-digit touchdowns, Jeff Fisher was his coach in Tennessee. Injuries and a slew of other issues had a role in Britt’s unceremonious end with the Titans, but I don’t think it’s an accident that his one-year prove-it deal came from a Fisher-led team. Britt was the right type of a risk for a team starved of quality receiver play. Whether it works out is a different story.

Overall, the passing game needs more out of tight end Jared Cook and his $16 million guaranteed than it got a year ago, and adding Greg Robinson and Tre Mason in the draft might point to a more conservative run-heavy approach to complement what should be a pretty good defense. But that’s for a different day.

My guess: Givens is a safe bet, and even if Britt isn’t the player he was for that stretch in 2010, I think an engaged version of who he is now still beats out Pettis.

For a team that’s been a model of stability lately, the 49ers’ cornerback situation sure is bizarre. From Tarell Brown missing out on $2 million last offseason and the Eric Wright trade getting voided to all the turnover, it’s a position that doesn’t seem to fit with how well the Niners have handled transitions all over their roster.

Wright eventually did end up in San Francisco, and as of June 17, he seemed to be a big part of their 2014 plans. That is, until he decided to retire.

With Wright out of the picture, the Niners’ cornerback situation basically comes down to five guys: Tramaine Brock, Chris Culliver, Chris Cook, Perrish Cox, and Jimmie Ward. Brock is pretty much guaranteed to be one of the starters on the outside, so that leaves the other outside spot and the nickel spot left to be decided.

Culliver was the team’s third corner during the Super Bowl run in 2012, but when he played, he actually lined up outside. Most expected him to slide into a starting role last year, but a torn ACL in training camp ended his season before it started. He still wasn’t ready by the time OTAs began, which gave newly signed Cook a chance to work opposite Brock with the no. 1 defense.

When the Niners took Ward with the 30th pick this draft, a lot of people wondered why they would take a safety after drafting Eric Reid in the first round last year and signing Antoine Bethea to a big contract this offseason. The answer lies elsewhere in the division, where the Cardinals used Tyrann Mathieu as a third safety/slot corner with a lot of success last year. Ward’s main role as a rookie will probably be in San Francisco’s nickel package, where his experience as a middle-of-the-field defender will be useful.

My guess: If Culliver is healthy, he gets the spot. Cook never showed much during his time in Minnesota, and his blatant homophobia aside, 2012 Chris Culliver is San Francisco’s best corner. I also think Ward gets the nickel job. He’s a player unlike anyone the 49ers have had under Vic Fangio — in a good way. 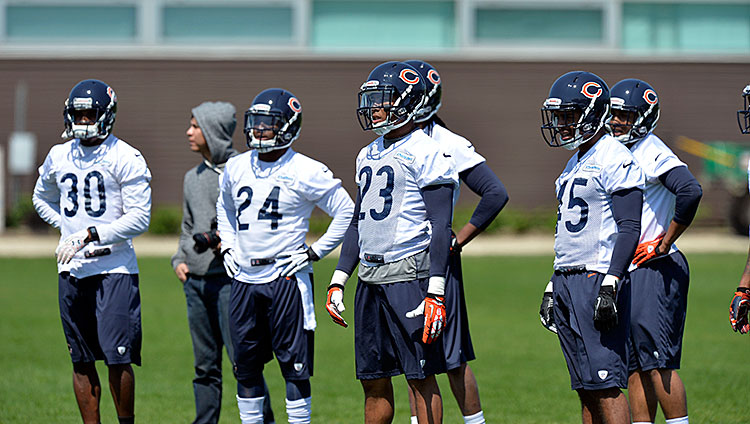 Even with an impossibly bad run defense, the Chicago safeties were the team punch line. Chris Conte had the more obvious low points, including when Aaron Rodgers ripped out Chicago’s heart in Week 17, but Major Wright might have been even worse.

Wright was allowed to walk this offseason, reuniting with Lovie Smith in Tampa Bay. Conte is back, though, and he’ll be one of three players fighting for a starting gig next to Ryan Mundy, who spent last season doing an incredibly nondescript job for the Giants. That’s not an insult. The Bears would have done anything for nondescript last year.

Mundy was one of three safeties brought in this offseason, along with M.D. Jennings (on a one-year deal from Green Bay) and Brock Vereen (taken in the fourth round out of Minnesota). Packers fans reacted to the Jennings signing the same way Bears fans would react to Green Bay signing Conte. Take that how you will. That leaves Vereen as the most desirable option.

Vereen already has the inside track, with Conte missing all of OTAs while recovering from hip surgery. Vereen’s already gotten the chance to work with the first-team defense, and according to some, it’s a job he’ll probably never relinquish.

My guess: The Bears moved back into the fourth round to take Vereen, and I think he starts over Conte. The new coaching staff and front office hasn’t been shy about starting its own players over holdovers. Aside from Lance Briggs, Charles Tillman, and Tim Jennings (all of whom went to the Pro Bowl two years ago), Conte is the last starter left from the Bears’ 2012 defense.

Only Anthony Castonzo and Reggie Wayne remain from the pre–Ryan Grigson era in Indianapolis, and with Hakeem Nicks and a returning Dwayne Allen in the mix, Andrew Luck’s arsenal is fuller than ever.

Where offensive coordinator Pep Hamilton still has some work to do is on his offensive line. Castonzo and 2013 free-agent prize Gosder Cherilus are set at tackle, but inside, there are some choices to be made.

The Colts appear ready to ride with second-year center Khaled Holmes. A fourth-round pick last year, he played only a handful of snaps. With Samson Satele now gone, Holmes has an unabated path to the starting job.

Who starts next to him looks a bit more complicated. The Colts signed former Patriot Donald Thomas to a starter-worthy deal last offseason, but he missed 14 games with a torn quad. It turns out that was only part of the bad news. Thomas also tore his biceps on the same drive, an injury that’s slowed his ability to rehab the quad. He missed all of OTAs last month but should be around when camp gets started.

By the end of OTAs, second-round pick Jack Mewhort was working in Thomas’s spot at left guard. Mewhort was a tackle at Ohio State, but he has experience as an interior lineman dating back to high school.

If Thomas does come back in good enough shape to win the job, Mewhort may be left to fight it out with 2013 third-round pick Hugh Thornton to play right guard. Thornton struggled when he had to come on for Thomas last year, but with an offseason full of reps with the first team, it’s reasonable to expect he’d be better in Year 2.

My guess: I don’t know if it happens by Week 1, but I have to think that if Thomas is healthy, he and Mewhort end up as the two starters. The Colts really need to take better care of Luck, and I think they’ll be open to whatever combination allows that to happen.