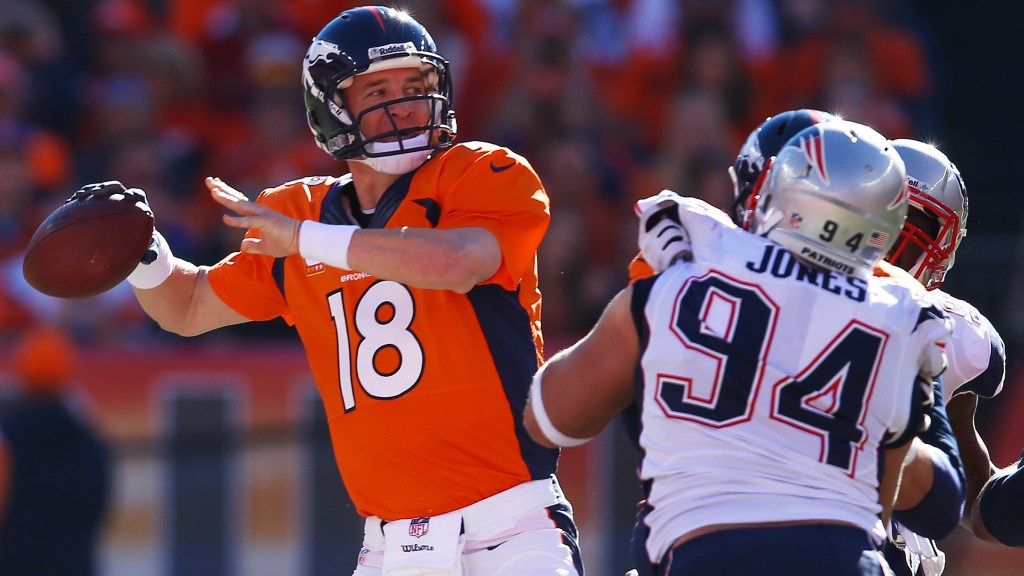 • Peyton Manning is heading back to the Super Bowl after his Broncos produced a comprehensive 26-16 victory over an undermanned Patriots team in the AFC Championship Game. “Ssssssometimes things just don’t go your way,” Patriots head coach Bill Belichick said after the game, “but ssssssometimes things do. And we’ll be back next year, trying to feed the apple of knowledge to our opposssssssition.” Belichick then let his tongue dart out a couple of times before adding, “metaphorically sssssssspeaking.”

• A last-minute interception by Malcolm Smith sealed a thrilling Seattle Seahawks 23-17 come-from-behind NFC Championship win over the San Francisco 49ers. “OH YOU KNOW WHO IT IS, PETE CARROLL, PETE CARROLL, PETE CARROLL!” announced Seahawks head coach Pete Carroll as he sprinted into the postgame press conference. “FOURTEEN DAYS UNTIL THE CARROLL BOWL, WHO ELSE WANTS TO STAY AWAKE THAT WHOLE TIME?” When the room fell silent, Carroll pulled out a handful of flashlights, threw them into the crowd of reporters, and yelled, “COME ON! IT’S EASY! JUST GIVE YOURSELF THE OL’ PETE CARROLL SHINER AND LOOK INTO THESE FLASHLIGHTS WHEN YOU FEEL TIRED. IT’S PART OF THE OL’ PETE CARROLL PROTOCOL, PCP!” When asked if PCP was the name of the Pete Carroll Protocol or an integral part of the protocol, Carroll responded, “NO TIME TO ANSWER! MEET PETE CARROLL IN NEW JERSEY!” before sprinting east out of CenturyLink Field toward the Cascades.

• The pairing for Super Bowl XLVIII in New Jersey is now set, but the big Super Bowl news to come out this weekend has nothing to do with the teams playing; instead, it’s a report that NFL commissioner Roger Goodell plans to sit outside at the game despite potentially freezing weather conditions. Sorry, Goodell, but that tough-guy act isn’t good enough for us here at ALN. Unless you go sleeveless how can you expect the owners to respect you as a commissioner? Real football is played without sleeves, and real commissioners rock tank tops in New Jersey. Period.

• After exploding for 54 against the Warriors on Friday, Kevin Durant continued to bolster his MVP case with 30 more points as the Oklahoma City Thunder extended their winning streak to five with a 108-93 victory over the Sacramento Kings on Sunday. Well, but I’m sure that’s an empty stat line … oh, he also had nine assists, six rebounds, four steals, and two blocks. Well, I’m sure he wasn’t efficient in … oh, he took only 15 shots to get to 30 points. Well, I’m sure he was self-centered and arrogant after the game … oh, he spent his entire postgame press conference talking about how his teammates were effective in setting him up in the pick-and-roll game. Well, I mean, Durant’s been around so long he has to be deep in his prime … oh, he’s only 24. Fine, Kevin Durant is unimpeachably amazing. Moving on …

• A tough Sunday in Boston sports was made worse when the Bruins fell 3-2 after a shootout to the Chicago Blackhawks in a rematch of last year’s Stanley Cup final. “So much suffering,” cried Boston superfan Aaron Sullivan to the heavens, after the first day in decades that saw the Patriots, Bruins, and Celtics all lose. “When is our city going to finally have a good sports day?” And the heavens answered by making some clouds look like a pair of angrily furrowed eyebrows.

• Chelsea heaped yet more woe on Manchester United, beating the Reds 3-1 behind a Samuel Eto’o hat trick. “I swear I’m just one big win from turning this around,” said struggling Manchester United manager David Moyes after the match. “Then they’ll sing my name from the rafters at Old Trafford. Perhaps to the tune of that hot new Lorde song, ‘Royals.'” Moyes then sang, “They’ll never be Moy-als, Moy-als—” before pausing and adding bashfully, “Oh dear, that didn’t come out how I wanted at all.”

• Top-seeded Serena Williams was among the high-profile Australian Open casualties, falling 4-6, 6-3, 6-3 to Ana Ivanovic, as the heat wreaked havoc with a number of the tournament favorites in the tournament’s fourth round. “Australia is a tough place to play. I’d rather go out this way than how Sharapova went out,” Williams said after the match. When asked what happened to Sharapova, Williams explained, “Australia is the home to a number of the world’s most deadly species. From snakes to spiders to jellyfish, this country can kill you in a number of ways. In Sharapova’s case, she was stung by Dominika Cibulkova.” When asked if that was some sort of indigenous marsupial, Williams replied, “What? No. She’s a great tennis player, whom I happen to dislike losing to. Come on, guys.”

• The Calgary Flames and Vancouver Canucks opened their game on Saturday with “Goon Squad” lineups, resulting in an eight-player ejection in the first two seconds of the Canucks’ 3-2 shootout win. People would argue that this “goon” phenomenon is a pointless anachronism that is unique to hockey, to which I would ask, have you seen Irish hurling recently? Because Galway will throw out a hurling goon squad that would put these Canucks to shame. Oh, you have seen Irish hurling recently? And it’s plainly apparent that I know nothing about Irish hurling? Well then, I suppose starting entire “goon squads” at the beginning of a game so that they can have a melee is a pointless anachronism. Carry on then.