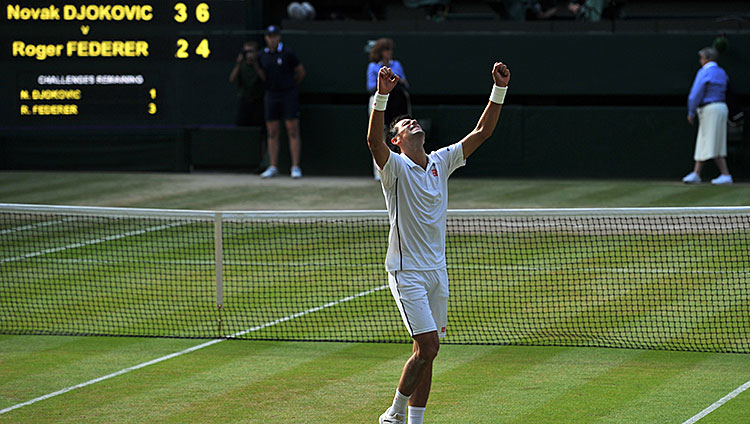 In case you were busy shooting off fireworks to celebrate the start of the Tour de France, here are the top stories you missed in sports this weekend:

In the best tennis played on lawns:

Novak Djokovic won his second Wimbledon title, outlasting Roger Federer for a thrilling 6-7 (7), 6-4, 7-6 (4), 5-7, 6-4 win over the seven-time champion. Unfortunately, the trophy ceremony was marred by a visibly impaired Andy Murray, who stumbled out of the gallery holding his trophy from last year’s tournament. The Scotsman then took the microphone out of Djokovic’s hands and declared, “You may take my trophy, but you’ll never take my trophy!” When told Djokovic would receive a different trophy, Murray belched into the mic and apologized for the mistake.

In the worst news in the World (Cup):

Brazil advanced to the semifinals of the World Cup with a 2-1 win over Colombia, but the victory proved Pyrrhic for the hosts as the team lost star forward Neymar for the remainder of the tournament to a fractured vertebra. “I mean, he’s still just a diver in a sport full of ’em,” insisted noted Auburn football fan Joe-Troy Keith. “One broken back doesn’t change that.” Keith then looked around at a roomful of unconvinced friends and added, “Look, look, now hear me out. Bo Jackson probably once rushed for 190 yards with a broken vertebra. We just didn’t hear about it because he wasn’t falling over every time his … back … broke.” Keith then exhaled loudly and asked, “Anyone here want to back me up? No? Why are we even talking about Neymar? Is it real hot in here? It is, yeah? Are y’all sweating as much as I am?”

The Netherlands snuck past Costa Rica and into the semifinals of the World Cup on penalties, 0-0 (4-3), after the Dutch manager made the intriguing decision to bring in reserve goalkeeper Tim Krul for the shootout. The result was a Krul one for Costa Rica, as the team was Krully eliminated from the tournament, turning its glorious season into a Krul summer. With more challenging teams on the horizon, however, it must be asked if the Netherlands was being Krul to be kind by eliminating Costa Rica now, before things became Krul and unusual. That probably gives the Dutch too much credit, as they likely had Krul intentions from the start. Now all that’s left for the Ticos is to Krul off in the pool, hit the back-to-sKrul sale at J. Krul, and perhaps find solace in a re-watching of Krul Runnings.

Gonzalo Higuaín scored early and Argentina held on late to oust Belgium from the World Cup with a 1-0 win. With the loss, the list of things that Belgium is better at than Holland remains limited to “food.”

In the unfair advantage that is employing Billy Beane:

The big leagues’ best team, Oakland, got better. The A’s acquired starting pitchers Jeff Samardzija and Jason Hammel in exchange for top prospect Addison Russell, among others, in a trade with the Cubs. Samardzija then proceeded to dominate in his Oakland debut, scattering four hits as the A’s beat the Blue Jays, 4-2, before being named to his first All-Star team, which he will watch from the AL bench after the trade. Things continued to be absurdly great for Samardzija, as the former Notre Dame All-American got word that his NCAA eligibility was reinstated, allowing him to relive his glory days as a top-flight college wide receiver this fall. Samardzija also found out that his hometown of Valparaiso, Indiana, will be renamed Valpardzija in his honor, and that his high school sweetheart Kathy Pinkston has left her husband, Kip Callows, who in the third grade gave Samardzija the awful nickname “Shamardzija.”