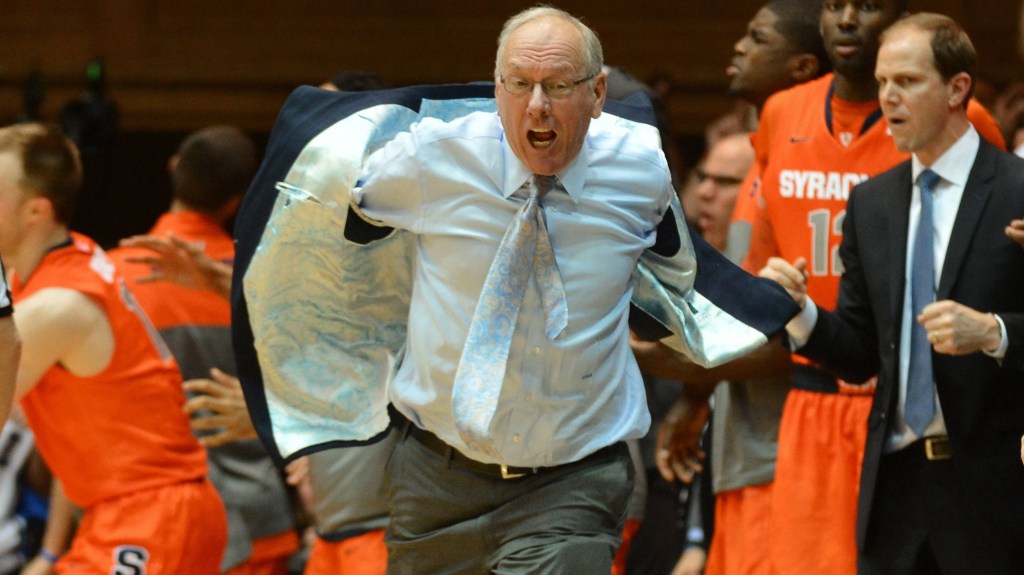 In case you were busy bringing a solid defensive presence to a thin Brooklyn frontcourt, here’s what you missed in sports last weekend:

• After a controversial finish that saw Syracuse head coach Jim Boeheim ejected, the Duke Blue Devils escaped Cameron Indoor Stadium with a 66-60 win over the Orange. “First the refs came for the Wolfpack,” said stunned Syracuse freshman Dan Stevenson, “and I said nothing, for I was not of the Wolfpack. Then they came for the Tar Heels, and I still said nothing because I did not know what a Tar Heel was. I’m from Michigan. Then they came for the Terrapins, and I said nothing, because seriously what the hell are these ACC mascots? But now that they’ve come for the Orange, who will speak for the proud talking oranges of upstate New York? Who?”

• Kevin “Muffins” Durant’s 42 points were not enough as the Los Angeles Clippers won a Western Conference shootout with the Oklahoma City Thunder, 125-117. Meanwhile in Eastern Conference basketball, a weird squirrel tried to roll three nuts past Milwaukee big man Ersan Ilyasova while he was headed to the Bradley Center. However, Ilyasova was not fooled by the squirrel’s attempt at misdirection and wound up collecting two acorns before the Bucks’ 110-100 loss to the Indiana Pacers.

• O Canada! The Canadian hockey team brought home its second consecutive Olympic gold medal with a 3-0 win over Sweden, while America was knocked off the podium altogether after losing 5-0 to Tuukka Rask and Finland. “RASK RASK RASK” chanted Rask after the victory as he skated triumphant around the rink in Sochi. This infuriated American Patrick Kane, who, not understanding Rask’s customs, assumed the Finnish goalkeeper was mocking our nation’s most hallowed chant and drove an American flagpole through Rask’s leg. Shocked by the bloodshed, Rask’s Finnish teammate Teemu Selanne fell to his knees and yelled “KAAAAAAAAANE!” with his fists raised to the sky, and promised he would gain vengeance if it forced him to travel from one end of the universe to Anaheim.

• A Staten Island man was arrested Friday for threatening Knicks owner James Dolan. Meanwhile, a man in Queens breathed a deep sigh of relief upon hearing the news, and his son failed to learn a valuable lesson.

• Australian officials are upset with Dodgers starter Zack Greinke, who said his team is not excited for its spring training trip down under. One has to sympathize with these shrimp-barbieing criminal-children; I mean, can these kangaroo-riding koala lovers really be expected to put up with Greinke complaining about their island filled with poisonous monster beasts and unbearable desert heat? Greinke’s comments were completely unfair to those drunken Vegemite chompers, and he should apologize to them much like Greg “The Shark” Norman should apologize for his past performances at the Masters.

• In a thrilling 23-hole final, Australian Jason Day outlasted Victor Dubuisson to bring home the Accenture Match Play title. In honor of his title, I will apologize for the previous paragraph. That was a real low blow against Greg Norman. The guy was a great golfer and fashion icon and he deserves a higher level of respect than I gave him. The rest of the paragraph obviously still stands.

Big Men: On Jason Collins Returning to the Nets and Glen Davis Joining the Clippers