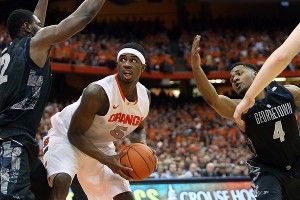 In case you were busy celebrating your big Oscars win by drunk-dialing Matt Damon and yelling, “How ’bout dem apples!” here’s what you missed in sports last weekend.

This article has been updated to correct a reference that Georgetown and Syracuse played their last game as Big East opponents.

Four-Day Mad Dash: The Five Types of Players With the Most at Stake at the NFL Combine