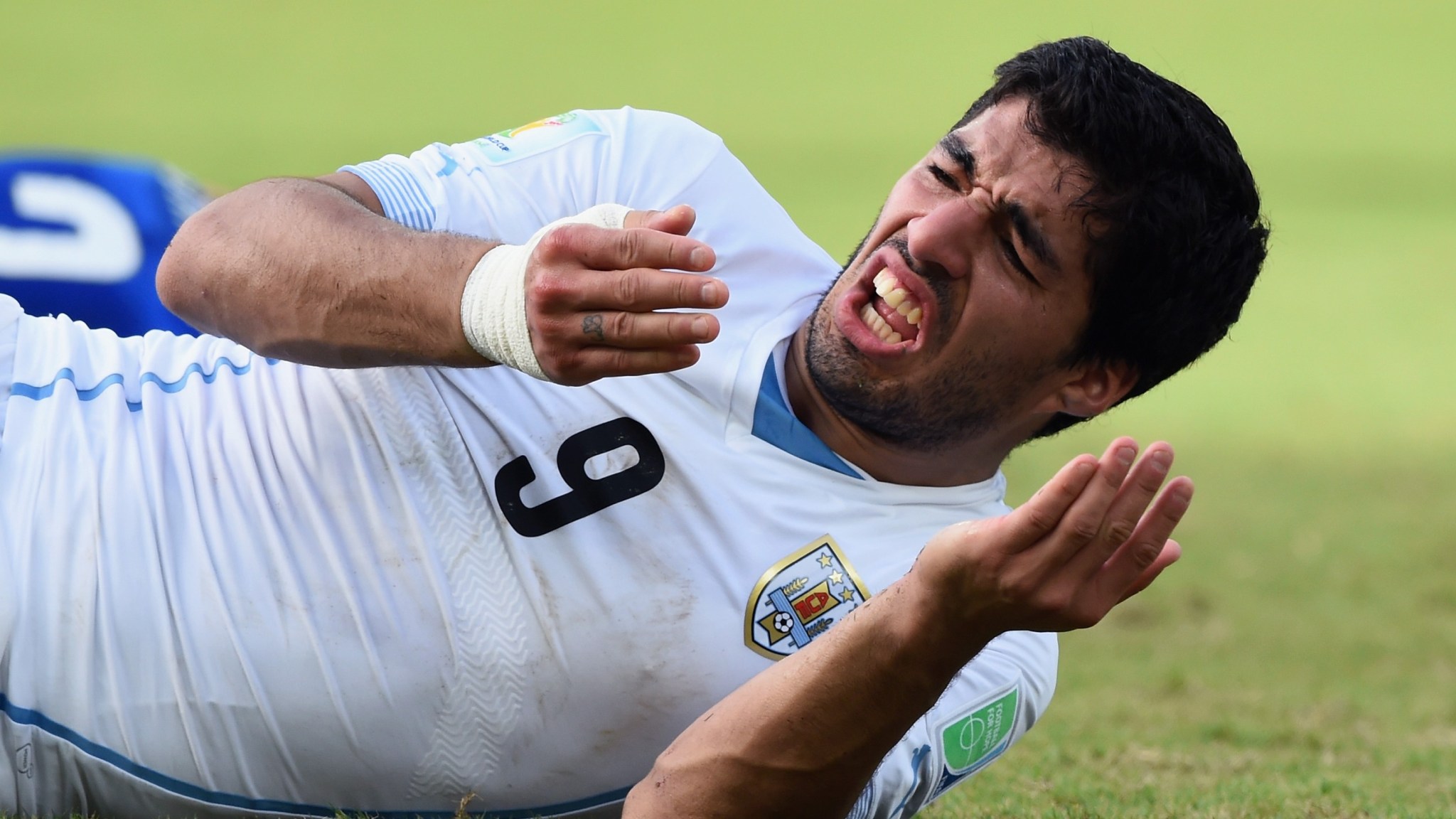 In case you were jet-setting down to Brazil like some kind of hipster hotshot, leaving About Last Night in the hands of an unstable sociopath, here’s what you missed in sports on Tuesday:

• Uruguay defeated Italy, 1-0, in World Cup action, to eliminate the perennial European power and advance to knockout play. Afterward, the big story was Luis Suárez, who appeared to bite Italian defender Giorgio Chiellini late in the match, in what would be a repeat of prior offenses. “Why did you do it?” reporters asked, attempting to maneuver their recorders toward his mouth using the flimsy 10-foot poles they had hastily devised from spare pens and duct tape before entering the locker room.

• Georgios Samaras converted an injury-time penalty kick as Greece defeated Ivory Coast, 2-1, to earn a last-minute berth in the final 16. And I’ll tell you something else: This is America, so screw all you feel-good liberals who want me to write “Côte d’Ivoire” instead of “Ivory Coast.” Sorry, weenies, but here in the UNITED STATES we don’t kowtow to every namby-pamby intellectual with an anti-American agenda. Deal with it.

• In other World Cup news, Rich Coast secured the top spot in Group D after fighting England to a scoreless draw.

• LeBron James will opt out of the final two years of his contract with the Miami Heat, according to agent Rich Paul. “On the contrary, he’s definitely staying in Miami,” said James’s other agent, Poor Peter. “Wrong again — it could go either way,” said his third agent, Middle-Class Mary. Then they all sang “Puff, the Magic Dragon” together and the worst joke in About Last Night history ended.

• At merry old Wimbledon, Rafa Nadal survived an early scare to win his first-round match, while Roger Federer advanced with ease. “Not so tough without your precious clay, are you, Rafa?” asked Federer, staring at himself in the mirror, a tight smile disguising the tears forming in the corners of his eyes. “Come back to bed,” said his wife, Mirka, startling Roger so much that he screamed out, “I didn’t mean it, Rafa!” and crashed into a dresser drawer.

• Brandon Waddell threw a complete-game gem as Virginia beat Vanderbilt, 7-2, to even out the College World Series championship and force Wednesday’s winner-take-all Game 3. The outcome will be historic either way; Vanderbilt has never won a national championship in any men’s sport, and Virginia is the only team in the country to start nine players nicknamed “The Entitled Douche Bag.”

• In MLB news, the league officially adjusted a rule that attempts to eliminate home-plate collisions, and Stephen Strasburg became the latest player to give up chewing tobacco. The good news is, it seems like everyone’s going to be a lot safer. The bad news is, now we probably won’t ever get to see Strasburg barrel into A.J. Pierzynski at home plate while spitting tobacco juice all over his face.

The Power of LeBron and the Pressure on Miami