The Power of LeBron and the Pressure on Miami 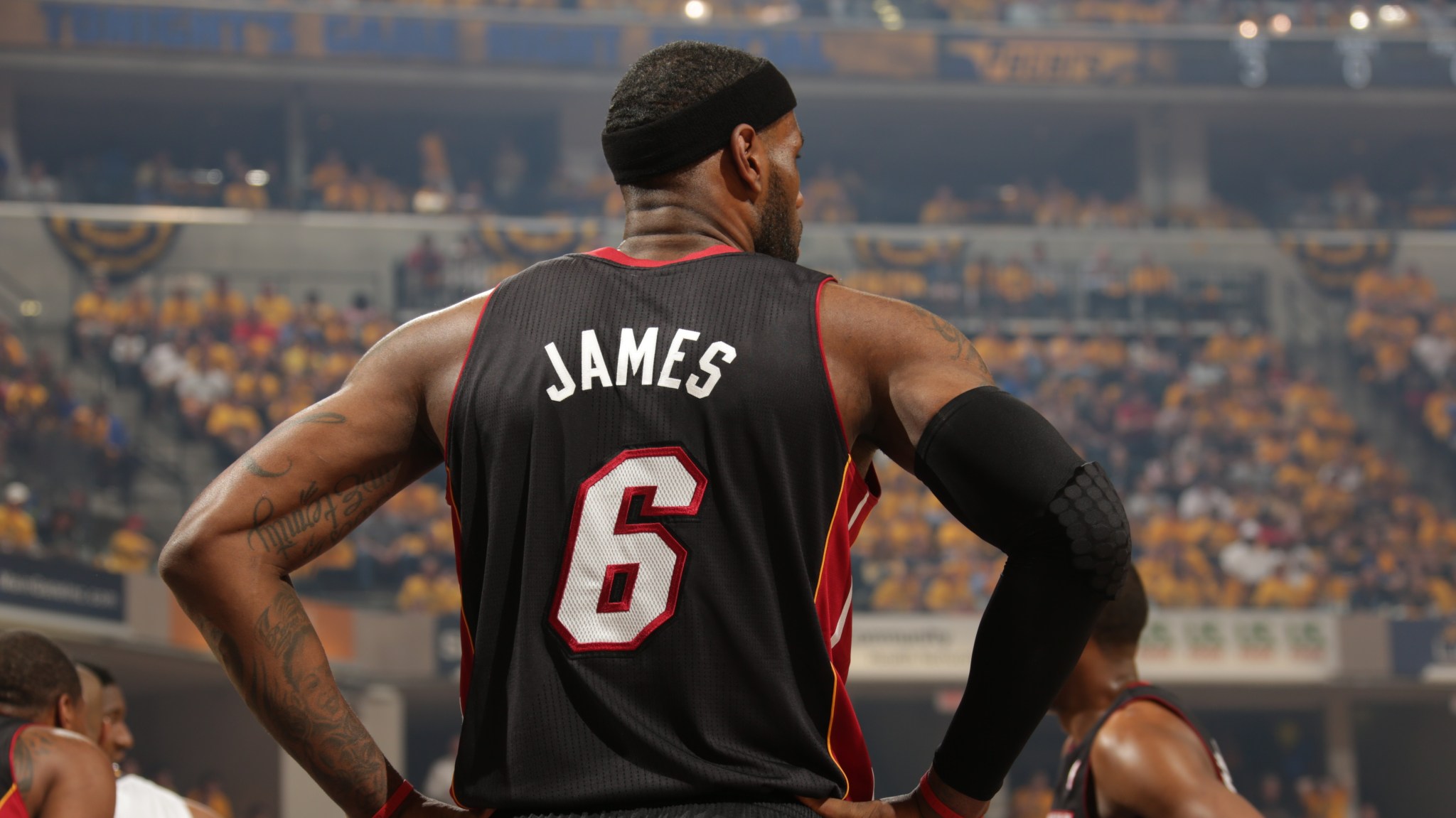 On Tuesday morning, LeBron James will be a free agent. No restrictions. He’ll listen to other teams, with a list of suitors that’ll probably include the Bulls, the Cavs, the Rockets, the Clippers, the Warriors, the Lakers, and maybe even someone like the Spurs, just to mess with our heads. The next few weeks will be full of rumors, we’ll read way too much into Facebook photos and Instagrams, and it’ll all get insane, just like 2010.

But this time feels different. Especially when you look at that summer in hindsight.

Everything that happened in 2010 was orchestrated by someone else. It started when Pat Riley arranged a meeting with LeBron and Dwyane Wade in November 2009, and continued with Wade and Riley making their official recruiting pitch in July (or long before, depending on your conspiracy theories). When the Heat got together, it was hailed as a revolution for superstars shaping their own destiny. LeBron was the face of it all, but it was Wade and Riley calling the shots all along.

Then there was “The Decision.” That shit-show took the free-agency spectacle to a whole new level. Only later did we find out most of it had been masterminded by Maverick Carter and agents from CAA. LeBron said yes, so he deserves the blame, but really, the biggest mistake he made that summer was putting his faith in people who weren’t experienced enough to see the backlash coming all along. Instead of trying to put out fires that would come with LeBron leaving Cleveland, a handful of his people thought it would be a good idea to go on national TV and pour gasoline on everything. It was insane. And it just feels like we’re in a different place now.

Or LeBron’s in a different place now.

The Heat are definitely in a different place now.

Four years ago, they were something like underdogs trying to turn a pipe dream into something real. Six days ago, Riley was sitting on a podium in Miami lecturing the whole world about greatness. “I think everybody needs to get a grip,” he said. “Media, Heat players, organization, all of our fans — we got to get a grip on greatness.”

On the Spurs, he said, “All of those guys stayed together and in their worst moments, they allowed management to retool.”

This sounded great at the time. The Godfather was answering a bunch of half-baked criticism on the Internet, reminding everyone that making four Finals in four years isn’t exactly a failure, and none of this is supposed to be easy. With teams and players, we spend so much time scrutinizing flaws that we forget to focus on what’s good.

In the Heat’s case, the team’s still pretty great. If they’d played OKC, they probably would’ve won a third straight title. If the core players stick around, there’s plenty of winning left to do. If they brought the same group back and the season started tomorrow, they’d be favored to make it back to the Finals. This was all part of Riley’s sermon, delivered like some mix of Gordon Gekko and Tywin Lannister, telling his whole team to man the fuck up. It was a refreshing change from the hand-wringing we were getting from everyone else.

But there was part of the whole thing that rang hollow.

“I’m not dropping championship rings on the table for those guys,” Riley said about recruiting his stars to stay. “They can drop their own.”

That’s the thing, though — the whole press conference was Riley dropping rings on the table. “I’ve been here for 45 years in the NBA,” he said. “I’ve witnessed dynasties, I’ve witnessed great teams. … This stuff is hard. And you’ve got to stay together if you’ve got the guts. And you don’t find the first door and run out of it.”

It felt like an address to LeBron. And this is when I started to wonder if he really might leave. 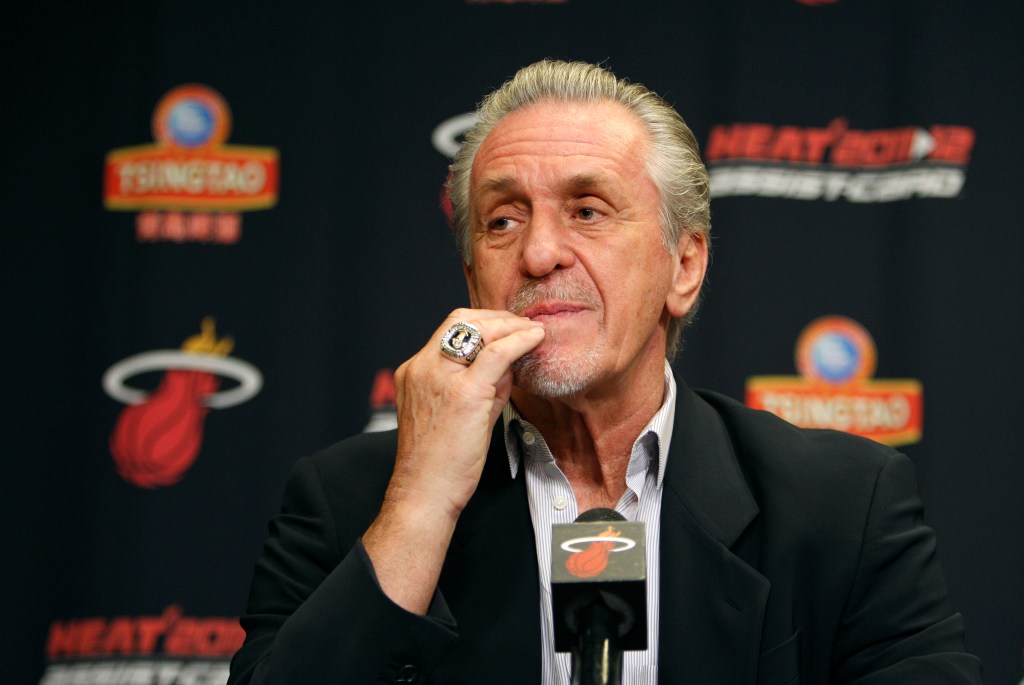 This stuff is hard? LeBron probably knows that. He’s played more minutes than anyone in the NBA since he’s been in Miami, while Wade rests for three months and still doesn’t show up in the Finals. You’ve got to stay together if you’ve got the guts? What about when Riley faxed his way out of New York in the ’90s? Where were the guts then? Which door was that?

Hearing Riley lecture the best player in the world might have seemed like a cool motivational tactic, but to me it just came off as insulting. Everybody’s won titles here. Riley can dismiss the Finals all he wants, but not to LeBron.

This isn’t about guts, or anybody’s grip on greatness. It would be an easier sell for Riley if LeBron saw it that way. But I think LeBron probably sees Wade declining faster than anyone thought possible, Chris Bosh disappearing at the end of every playoff run, and a Miami front office that refused to go over the luxury tax last summer after three years of profiting from LeBron at a massively discounted rate.

Heat fans will say the opt-out was part of the plan all along, and maybe that’s true. But if Riley were still controlling this, wouldn’t the stars have opted out together? That makes it clear to everyone (and especially other free agents) that they’re coming back as a group in a few weeks. That’s not what happened. LeBron opted out early enough to give other teams advance warning that he’s available, and before Wade or Bosh had made any decisions themselves.

If you think he’d never actually leave the Heat and all of this is overblown, that’s fine. Nobody thought he’d ever actually join up with Miami in 2010, either. We’ll see.

The only certainty right now is that the “Superteam” from four years ago just doesn’t exist anymore. There’s one superstar in Miami, and two guys who are overpaid and getting older. Outside of Wade and Bosh, the supporting cast was never great, but now it’s shakier than it’s ever been. That’s where we are with the Heat.

For most of the last two weeks, I think most people expected LeBron to ignore all of that and opt in anyway. To give it at least one more year. Even with the questions, Miami had enough talent to make another Finals run in the horrible East, and there weren’t enough obvious opportunities elsewhere.

But Tuesday we found out how far LeBron’s really come after four years and two titles. If he only looked like an empowered superstar in 2010, in 2014 we’re seeing the real thing. The talent to make Finals runs basically starts and ends with him, and he knows it. He can go to four or five other teams around the league and get the same title odds just by showing up. He doesn’t need the money, and he’s not worried about what people think. So it’s on guys like Wade and Bosh and Udonis Haslem to opt out and take smarter deals if they want him back. It’s on Riley to use that flexibility to overhaul the oldest roster in the league. It’s on Micky Arison to spend the money.

LeBron made the first move Tuesday and sent a message to the rest of them. If everyone in Miami wants to keep chasing titles, they can’t just talk about it; they’ll all have to sacrifice and earn it.