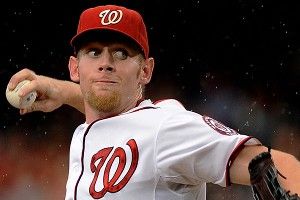 Hey everyone, I’m back. I got married last Saturday, which means huge changes for “About Last Night.” I’m an official adult now, and I realized that some of my material is immature and inappropriate. It’s time to clean up my act and become a lot more conservative and family-friendly with my humor. That way, everyone can enjoy a good hearty chuckle in the morning. But it’s only fair to give you a “transition day” to help you prepare. In the items below, I’ll use an example of “old humor” after the link, and then show you what the new, more adult jokes will be like in bold. Tomorrow, the old humor will be gone for good.

NEW: Boy, if Strasburg blew any more smoke, he’d be a danged politician!

NEW: This just proves what I’ve always said — that danged Nunez is nothing but a yahoo!

NEW: Looks like the Eagle has landed — on his danged BE-HIND!

NEW: With that many steals, I don’t know if we should send this guy to the majors or the danged penitentiary!

NEW: Influencing the author? I don’t care who you are, that’s a danged Pater-NO-NO.

NEW: When it comes to Kevin, the Yankees all say one danged thing: You Kill Us!

NEW: Wilson? Just don’t tell Tom Hanks, or he’ll paint a danged face on him and lose him in the ocean!

NEW: Hey, I gotta tell you guys, the other day I had this amazing steak sandwich at Applebee’s. I’m telling you, this thing was unreal, and it only cost $5.99. You been to Applebee’s lately? Well, let me tell you, it’s not what you remember … [Continues talking about Applebee’s for four hours]