About Last Night: Orange You Glad I Didn’t Say Panthers? 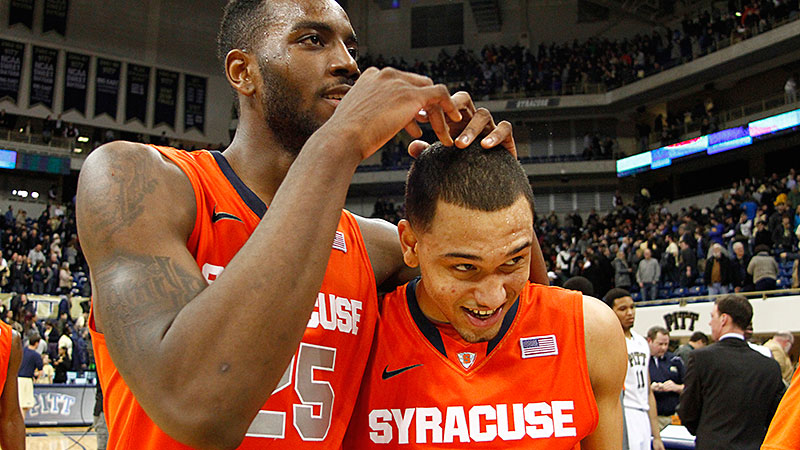 In case you were busy splitting a Gauloise with the president of France on the streets of San Francisco, here’s what you missed in sports on Wednesday:

• A buzzer-beating 3-pointer from Tyler Ennis was the difference, as top-ranked Syracuse stayed perfect with a 58-56 win over Pittsburgh. This showdown featured the most exciting ending of the college hoops season, while serving as your annual reminder not to pick Pittsburgh to win anything meaningful in March. Don’t do it. It won’t happen. I know what you’ll be thinking: Pitt gave Syracuse a good game, and [name of team playing Pitt in the first round] is not that good, and then in the next round [name of team that is not that much better than Pitt] is vulnerable. And you won’t be wrong. But don’t pick Pitt, future you. Seriously, set a calendar reminder now.

• Kaitlyn Farrington did what Shaun White couldn’t, securing halfpipe gold for the U.S. in Sochi. However, Farrington refused to put on a curly red wig for the medal ceremony, despite calls to do so from some in the media, citing the requests as “some weird, uncalled-for Vertigo shit.”

• The New York Knicks gave up an early double-digit lead before losing, 106-101, in overtime to the lowly Sacramento Kings at Madison Square Garden. A borough away, a boy and his father sat watching the game, in Queens. They watched it, unmoving, silent. They stayed that way for hours after the final horn sounded and all the players had left the court and headed home. The boy briefly found the voice to mutter, “I never thought we could win.” With a tear rolling down his cheek, the man mouthed “I love you” silently. The boy did not see this.

• Manchester United and Arsenal battled to a 0-0 draw, with both teams dropping crucial points in the race for Champions League qualification. “Games are best when they are microcosmic of life,” Arsenal manager and noted Frenchman Arsene Wenger said after the match, as he felt around in his puffy coat for a pack of Gauloises. “And much like in life, nobody scores, the game is a draw, but really everybody loses.” Wenger then unzipped his puffy coat, causing hundreds of packs of cigarettes to fall out, and added with a wry smile, “We all know that in the painful draw that is life, David Moyes loses most of all.”

•  Yesterday marked the beginning of the end of the career of the Yankee Clipper by Derek Jeter, who announced that he will be relinquishing command of the vessel at the conclusion of the 2014 campaign. “As you may have suspected, I am not the original Yankees Captain,” Jeter added with a laugh. He explained, “After I was drafted by the Yankees organization, the Yankees’ captain called me up and said, ‘Welcome to the club, I’ll most likely kill you in the morning.’ For about three years he did that every day, before one day in 1995 he pulled me aside in the dugout and told me his secret. ‘I am not the original Yankees Captain,’ he said. ‘My name is Don Mattingly. The man I inherited the title from was not the original Yankees Captain either. The real Yankees Captain was Clark Griffith and he retired in 1905. See, it’s the title that matters. No one would give a World Series trophy to the Captain Don Mattingly.’ And that was as true then as it is now.” Jeter later approached outfielder Brett Gardner, who has been rattled since he avenged his father’s untimely death, and asked, “How do you feel about the Yankees’ captaincy?”

Note: The Yankees Are Completely Serious About All of This