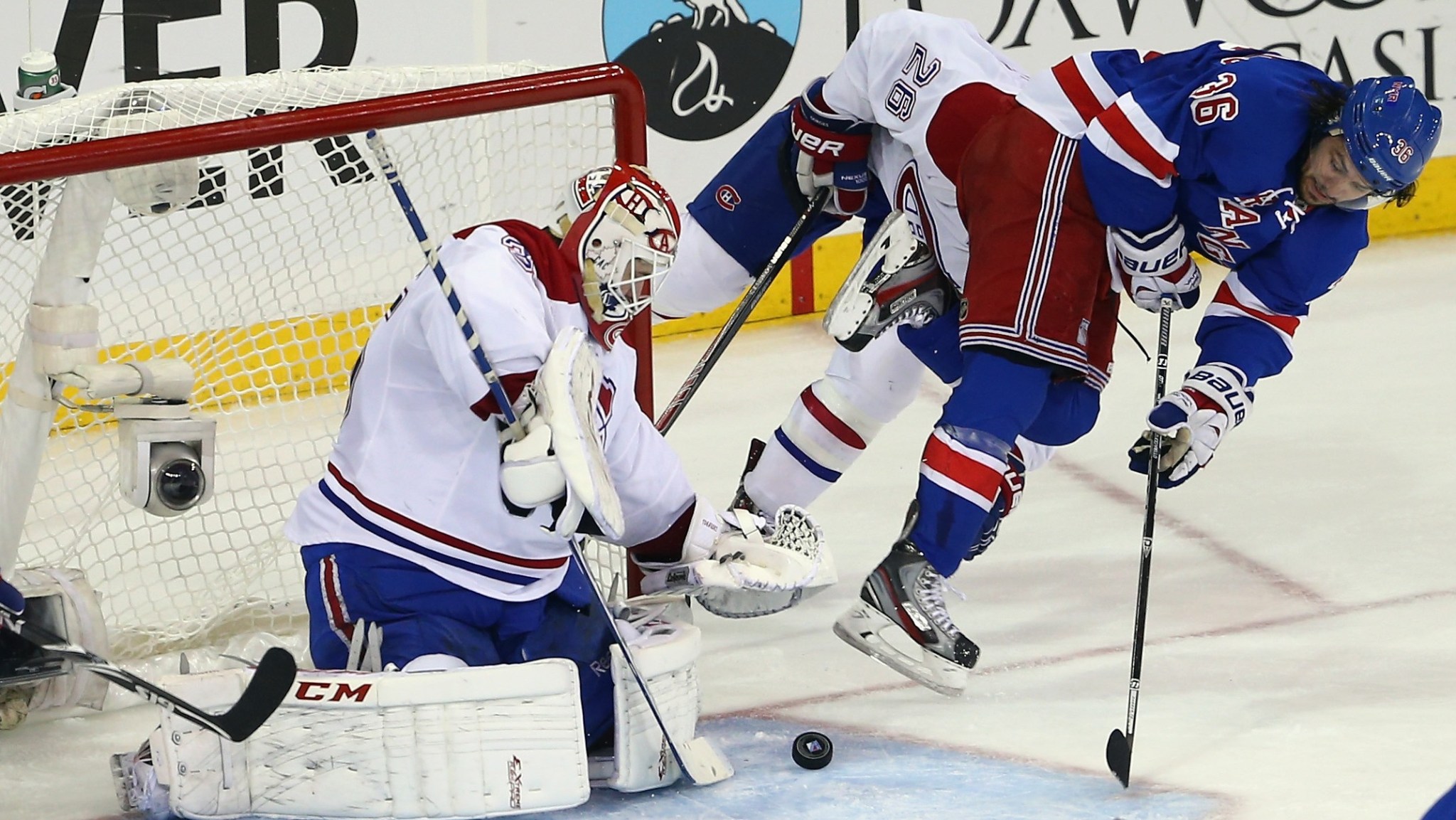 In case you were busy cutting Miguel Olivo for reasons other than his inability to play baseball, here are the top four stories you missed in sports on Thursday:

In the ’qvist just got more interesting:

Montreal reserve goalkeeper Dustin Tokarski kept pace with Henrik Lundqvist through regulation and Alex Galchenyuk scored an overtime winner, as the Canadiens narrowed the Eastern Conference finals gap to 2-1, with a win over the New York Rangers. “I am not often troubled, but this loss troubles me,” said Lundqvist after the game. “For now it is anyone’s series.” Lundqvist then pulled up his French cuffs and struck a thoughtful pose, revealing a platinum Rolex that brought out the gray in his eyes. He added, “Well, not anyone’s series. A team besides ours and theirs could not win it. Also, an unaffiliated group of men who happened to be holding hockey sticks could not win it. Also, a similar group of women could not win it. Also, a group of cats could not win it. I suppose this series still belongs to only one of two teams.” Lundqvist then shed his suit coat and twirled, before concluding with a wink, “I am once again untroubled.”

The Texas Rangers beat the Detroit Tigers, 9-2, but suffered a heaping helping of bad fortune. It was announced that Prince Fielder is facing season-ending spinal surgery, while infielder Jurickson Profar faces months out of the lineup after reinjuring his shoulder by reportedly sleeping funny. “Well, we’re still better than the Astros,” Rangers general manager Jon Daniels said of the injuries. “Unless, of course, all nine of our best players fall victim to nine separate misfortunes and are unable to play the rest of the year. But that will never happen. Two misfortunes, that we’ve already suffered. Seven? There’s an outside chance. But nine misfortunes? I would like to see that!”

Unfortunately for Daniels, Elvis Andrus was visiting the Detroit Mystery Spot, Alex Rios was saving a woman from a burning building, Adrian Beltre had gotten himself hooked on nerve tonic, Leonys Martin had run afoul of local police, Yu Darvish had been hypnotized into believing he was a chicken, and Shin-Shoo Choo was suffering from acute radiation poisoning. Fortunately for Daniels and the Rangers organization, Mitch Moreland is still by all accounts healthy and ready to go.

In picking the wrong fight:

Arizona cornerback Patrick Peterson criticized Seahawks cornerback Richard Sherman’s skill set, saying, “At the end of the day, he has great stats and he has great playmaking ability, not taking that away from him because he is a good corner. But as far as being a shutdown corner, man-to-man guy, in my eyes, I don’t believe he’s that.” Peterson then quickly added, “Hopefully, he doesn’t misconstrue these comments, and make them into something more than a mild, nuanced criticism.”

When asked what he thought of Peterson’s comments, Sherman’s eyes narrowed. “Oh, he thinks I’m the worst to ever play the game? On the worst team he’s ever seen? And he’s willing to bring my family into it? And to also malign the good names of both Pete Carroll and America’s troops? Does he not know who I am?” Sherman then stood at attention and declared to a dumbstruck reporter, “I am Richard Kevin Sherman, Commander of the Legion of the Northwest and loyal servant to the True Head Coach, Pete Carroll. Son of a maligned mother, brother to unappreciated teammates. And I will have my vengeance in this life or the next.”

In deciding it’s better to get cut than fade away:

The U.S. Men’s National Team announced its final 23-man World Cup roster, with national hero Landon Donovan notably omitted from the squad. Rather than mourn what might have been for Donovan in Brazil, let’s all take a minute to remember the greatest moment in American soccer history: