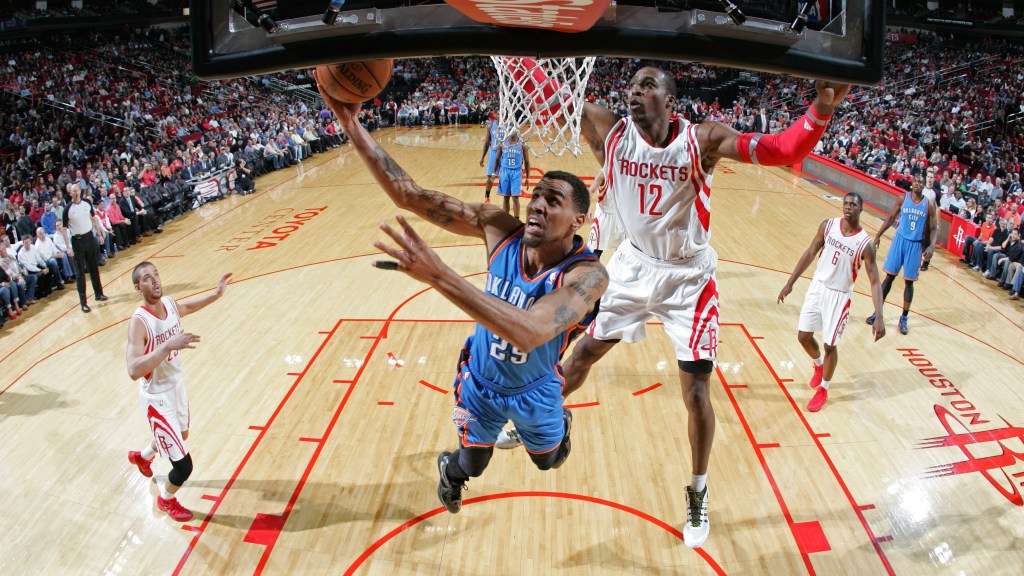 In case you were busy remembering the biggest figure skating controversy of the 1990s — when Nancy Kerrigan called Disneyland corny — here’s what you missed in sports on Thursday:

• The Houston Rockets dropped 73 first-half points and followed it up with 19 second-half points as they fell to the Oklahoma City Thunder 104-92. “Tough loss, but a big win for me,” Rockets center Dwight Howard said after the team. “I mean, I got to be all like, ‘Uh, guys, Houston, we have a problem,’ during a fourth-quarter huddle. That killed! Classic Dwight-Out! I mean nobody laughed, at all.”

• The Knicks revival project crashed back to Earth as the Indiana Pacers decimated New York 117-89. A boy and his father watched the game together, silently in their home in Queens. “We hate the Pacers, right dad?” the boy asked his father as Indiana’s lead grew. “Uncle Spike said we hate the Pacers. He said there once were men named Patrick and Reggie and because of them we hate the Pacers.” The father sat still, staring straight ahead, but his son would not relent. “Dad, tell me about how to hate the Pacers,” the boy cried. The father, slowly, deliberately, picked up the boy and held him eye to eye. “We no longer hate the Pacers,” the father said sternly to his boy, “to hate something, it must be able to hate you back. Have we earned the Pacers’ hatred?” The boy shook his head; he was on the verge of tears. “The only things we hate,” the father continued, “are our team, because it hates us back, and — ” Words caught in the father’s throat, and he coughed heavily as he put his son down. The man’s forehead fell into his hands. The boy, through tears, asked, “What else, father? What else do we hate?” But the father’s silence spoke volumes. “Oh,” the boy said, “we hate ourselves, yes? Is that the other thing we hate? Because we love the Knicks, who hate us, we must hate ourselves?” The father looked at his boy, tears of both pain and pride welling in the corners of his eyes, and said, “Yes, son. We hate ourselves.”

• Ohio State dropped its third consecutive game with a 63-53 loss to the Minnesota Golden Gophers, as the team failed to get back on track in Big Ten play. “It’s just the same thing every day to me,” said an unfazed Ohio State point guard Aaron Craft after the game. “After 17 years as Ohio State’s point guard, it’s tough to stay motivated. You have friends come and go, and you’re still here. But you just know that at some point in a decade or two, you’ll be too old for this place. That’s what keeps you working.”

• In NFL coaching news, the New York Jets have extended Rex Ryan’s contract and the Minnesota Vikings have hired Norv Turner to be their offensive coordinator. In unrelated news, I’m walking on sunshine. Whoa-oh! And don’t it feel good! Seriously, I’ve been singing “Walking on Sunshine” for 14 straight hours, so what started out as the best news of the day has somehow morphed into an inescapable, nightmarish hellscape. And don’t it feel good! (It doesn’t.)

• Connecticut grabbed its second win in AAC play, beating the Memphis Tigers 83-73 at the FedEx Forum. “Martha,” Connecticut alumnus and Stamford resident Blair Whitson called to his wife from the breakfast nook as he read the Greenwich Time, “did you see that the men won a game? At Memphis. Remember when we went down to Memphis to visit your friend Caroline?” Of course I remember, Martha thought to herself, as she sat, pretending to read Gillian Flynn’s Gone Girl for a book club she had made up as an alibi so she could have a biweekly tryst with an auto mechanic named Trent from Bridgeport. Every two weeks she would buy a book at the Barnes & Noble in the Stamford Town Center and her heart would flutter as she thought of the things Trent would do with her. And every time, as she left his shabby apartment, she would leave Trent the book on his nightstand. Because unlike her, and despite his erotic depravities, he was interested in reading and making something of himself. Martha didn’t know if he was willing to put up with her for the books, or the connections into the world of high society she had claimed to still have, but she didn’t care. As long as the relationship was a transaction, she was satisfied. He was nothing but an object to her, much the way her former best friend Caroline had been nothing but an object to Blair. That was all that mattered. “Honey, do you remember the trip?” Blair asked again, snapping Martha out of her reverie. But she decided to shrug rather than give her husband the pleasure of an answer, before retreating back into the world of daydreams.

• Seahawks wide receiver Percy Harvin has yet to be cleared through the league’s concussion protocol and remains questionable for the team’s NFC Championship Game showdown with the San Francisco 49ers. “PETE CARROLL PETE CARROLL PETE CARROLL,” Seahawks head coach Pete Carroll yelled, as he addressed the media on the matter. “WE’RE GOING THROUGH THE PETE CARROLL PROTOCOL, OR AS WE CALL IT, THE PCP, SO WHEN HE STOPS FLINCHING WHEN I TALK TO HIM WE’LL KNOW HE’S READY TO PLAY.” Carroll then flipped over a page and yelled, “WOOOO! FOR SAFETY’S SAKE, WE PUT THE WHOLE TEAM THROUGH THE PCP, SO AS OF NOW EVERYBODY BUT MARSHAWN LYNCH IS QUESTIONABLE FOR THE GAME ON SUNDAY. PETE CARROLL!”

Vegas Is Unsurprised by the Final Four NFL Teams

CourtVision: Everything You Think You Know About Rondo's Shooting Is Wrong