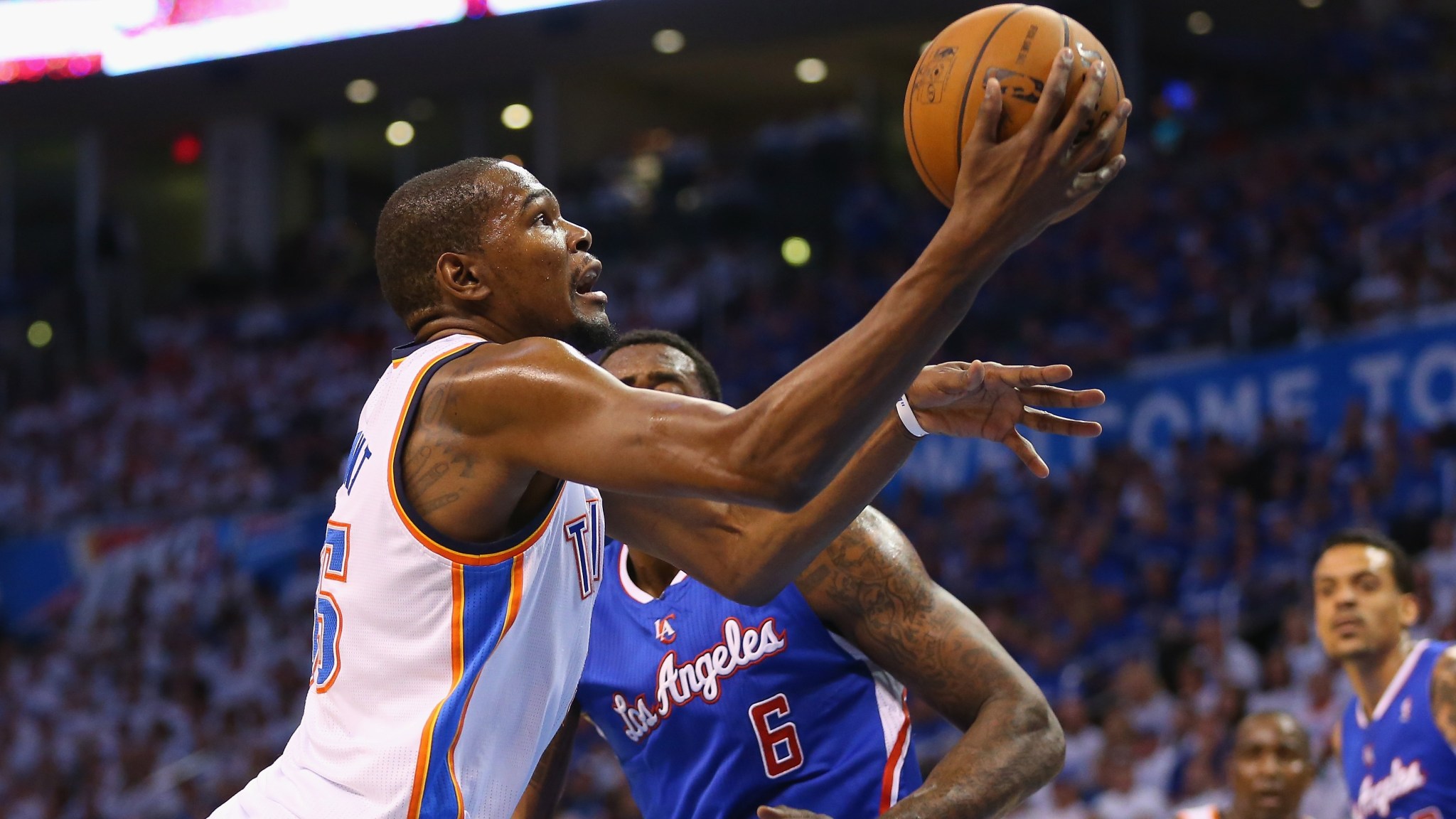 In case you were busy mock drafting your favorite characters from Draft Day, here are the top six stories you missed in sports on Wednesday:

Russell Westbrook and newly crowned MVP Kevin Durant combined for 63 points and were one Durant assist away from being the first teammates to record triple-doubles in the same playoff game as the Oklahoma City Thunder beat the Los Angeles Clippers 112-101. ���Aw man,” said a disappointed Durant after the game. “That would have been so great. Think of it: two triple-doubles. The Double-Triple-Doublers they’d call us, and Russ and I would tour the country as Muffins and the Kid, barnstorming and drumming up support for the cause of basketball. Thousands would show up to see the DTDers in action! We’d go to 27 major cities representing small-town Oklahoma City hoops. Think of the money we’d make playing basketball. What a dream!” Durant then smacked himself on the head and said, “You screwed it up, Kevin. Now your life is nothing like that dream. Because you’re too selfish.”

Evgeni Malkin and Sidney Crosby each had two points as the Penguins moved a game away from the Eastern Conference finals with a 4-2 win over the New York Rangers at Madison Square Garden. “MSG is a fun place for us to come play,” said Crosby after the game. “We’ve won, what? Twelve of our last 16 here? It’s cute that they think we’re rivals, though.” Crosby then giggled and said, “I mean, the idea of New York comparing itself to Pittsburgh? Adorable!”

Beleaguered center Roy Hibbert scored 28 points as the Indiana Pacers beat the Washington Wizards, 86-82, evening up their Eastern Conference semifinal matchup. “Now do you guys get it? Sheesh!” Hibbert said after the game to a confused group of teammates in the locker room. When told that the answer was no, Hibbert explained how his performances evoked the futility of the U.S.’s continued involvement in Afghanistan. A still confused Paul George then asked, “So is this art? Or like, a political statement? Or what? Actually, you know what? I don’t care. Just play well tomorrow.” To which Hibbert replied, “That’s up to the Joint Chiefs of Staff.”

Rockies third baseman Nolan Arenado tied a team record by running his hitting streak to 27 games as Colorado beat the Texas Rangers, 9-2, while Derek Jeter snapped a 161-at-bat home run drought in the New York Yankees’ 9-2 win over the Los Angeles Angels in Jeter’s final regular-season game at Angel Stadium. “Oh, so this is what it feels like to be overshadowed by Derek Jeter for no reason,” said Arenado when asked if he saw any connection between his streak and Jeter’s. Meanwhile, a single tear formed in the corner of Troy Tulowitzki’s eye as the Rockies’ shortstop gave his teammate an understanding nod.

Also streaking are Miguel Cabrera and the Detroit Tigers, who won their eighth consecutive game with a 3-2 victory over the Houston Astros. “That counts,” said Tigers manager and former Astros catcher Brad Ausmus after the game. “Yeah, it’s the Astros, but that totally counts. Don’t make me say it doesn’t count. Come on. Don’t do that.” Ausmus then sighed and told reporters, “Fine, it doesn’t count. You happy? You made Brad Ausmus feel like a dick.”

All-pro defensive back Richard Sherman will be a Seahawk for the next five years after inking a long-term extension that makes him the highest-paid cornerback in the league. The reigning Super Bowl champions have now re-signed defensive pillars Sherman, Earl Thomas, and Michael Bennett this offseason, which became the team’s priority after head coach Pete Carroll was finally convinced by general manager John Schneider that paying his players to stay with the team longer wouldn’t get him into trouble.