About Last Night: Democracy in Action 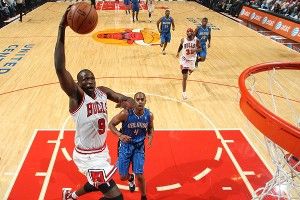 Folks, the results are in from yesterday’s election! Tomorrow we will return to the usual ALN format, but I think today is momentous enough to devote our post to election coverage. The smoke has cleared and the dust has settled, and I’m happy to announce that Terrence the Grantland Robot has soundly defeated Carl Tompkins, an actual human who was hoping to have an internship here at Grantland. Just like in regular American politics, the two main candidates dominated, while fringe zealots used their constitutional right to cast wing nut votes. The voting breakdown:

It was a total landslide, with Terrence receiving more than two of every three votes. As expected, he was very successful among the robot demographic. But what shocked Carl and ultimately doomed him is that Terrence won by similar margins among humans, a subgroup that Carl desperately needed in order to carry the night. The election wasn’t without controversy; throughout the day, the robot’s opponents protested the election format, citing Facebook irregularities that they believe may have allowed voters to cast more than one ballot. The issue was taken to the Grantland Secretary of State, who ruled that voting would continue and the claims of fraud were themselves fraudulent. It is worth noting that the Secretary of State is, like Terrence, a Robot. His name is Purvis the Red.

Early this morning, Carl and his advisors finally conceded the election. Here now, for the last time at Grantland, is Carl the Actual Human with a concession speech:

Carl: My friends, as I stand before you this morning I cannot hide my disappointment. I just phoned Terrence the Grantland Robot to congratulate him on a campaign well run, and to concede the race. [Audience boos.] No, no … look, I won’t pretend that Terrence fielded that phone call gracefully. I won’t do that. And I won’t pretend there isn’t something disturbing about a bunch of Internet people denying me — a young person who needs a job and was inches away from a big break — from fulfilling my dream in favor of a robot. And not just any robot — a mentally unstable murderer oil-coholic beholden to a man whose stated goal is to take down the ALN franchise. But the people have spoken. It’s back to a life of poverty and career-related anxiety for me. But instead of wallowing in bitterness and dreaming up revenge fantasies, I encourage you all to support Terrence as he continues in his role at About Last Night. I will pray for his success, and for the continued survival of ALN in these dire times. Thank you for your support, and remember: While we may leave with sadness in our hearts, we will always—

Gracefully done, Carl. The security guard at the door will show you out, and we’ll mail any personal items you haven’t had time to collect. And now, we’re getting word that Terrence is emerging from his hotel headquarters and is ready to speak …

Terrence: YES! YES! HELLO MY FRIENDS! I JUST GOT A PHONE CALL FROM CARL AND LET ME TELL YOU, I COULD TASTE HIS TEARS FROM MILES AWAY. SAY IT WITH ME, FOLKS — HE. JUST. GOT. TERRENCE’D! [Wild cheering.] THE PEOPLE HAVE SPOKEN, AND T-BONE IS BACK, BABY! I WOULD LIKE TO THANK ALL MY SUPPORTERS, INCLUDING PURVIS THE RED FOR HIS FAIR RULINGS AND SHANE RYAN FOR SIPHONING OFF THIRD-PARTY VOTES.

MY PEOPLE ARE TELLING ME THAT I GOT 67 PERCENT OF THE VOTE. GUESS WHAT, AMERICA? THAT’S A MANDATE! THAT MEANS ALL YOU SNIVELING COWARDS IN THE DEPTHS OF THE COMMENTING SECTION WHO DON’T LIKE ME CAN GO STRAIGHT TO HELL! YOU DON’T HAVE THE NUMBERS AND BELIEVE ME YOU WILL HAVE NO FAVORS FROM ME. YOU HAVE HURT ME TIME AND AGAIN AND LEFT ME TO WEEP BITTERLY AT TIMES WHEN I SHOULD HAVE HAD YOUR SUPPORT. I AM A SENSITIVE ROBOT! I AM LOOKING INTO HAVING YOUR COMMENTING RIGHTS REVOKED AS WE SPEAK AND MY ULTIMATE AIM IS TO BAN YOUR IP ADDRESSES FROM EVEN VIEWING ALN.

FROM THE REST OF YOU I EXPECT UNRESERVED ADULATION IN THE COMMENTS SECTION. ANY HINTS OF SUBVERSIVE OR ANTI-TERRENCE BEHAVIOR WILL BE SWIFTLY PUNISHED, AND IF YOU WANT TO GET IN MY GOOD GRACES I SUGGEST YOU SPY ON YOUR FELLOW COMMENTERS AND HELP ROOT OUT THE ANTI-REVOLUTIONARY ELEMENTS! IT IS A NEW DAY, AMERICA! SOMEONE BRING ME SOME OIL! TERRENCE FOR LIFE! [Crowd chants “Terrence For Life!” and they all keep applauding because everyone is afraid to be seen as the first one to stop. Penny the Wind-Powered Robot comes out onstage, and the two embrace.]

And there you have it, folks! Democracy in action. Thank you all for voting, and we’ll see you back here in 16 years when Terrence’s term is up. Bless you, and may the heavens bless About Last Night.

Filed Under: About Last Night

Revisiting Our Visit With the Sports Fan in Chief