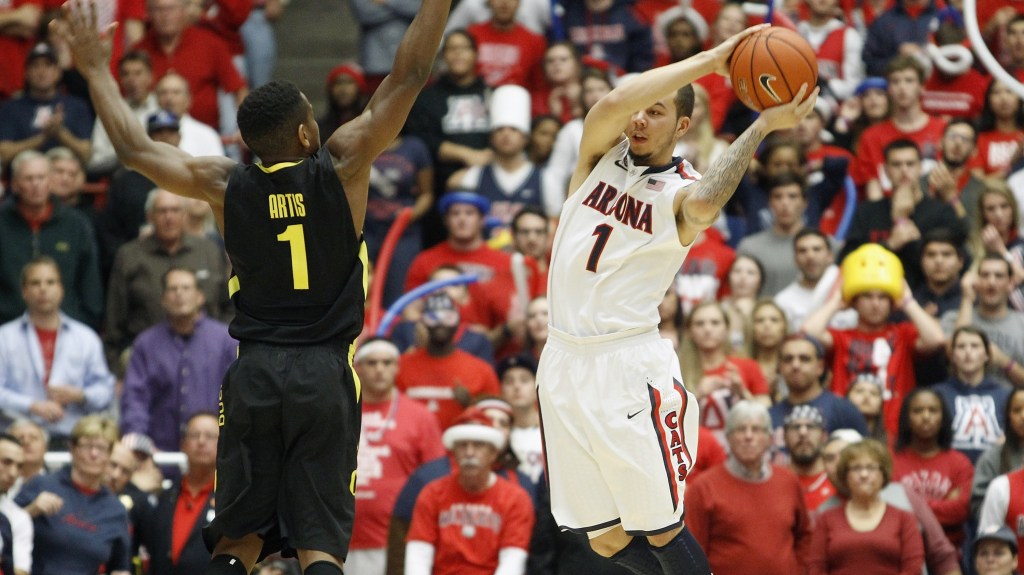 In case you were busy getting busted by customs trying to smuggle a raven into the Winter Olympics so you could say “That’s Sochi raven,” here’s what you missed in sports on Thursday:

• Despite an abysmal shooting night, no. 2 Arizona bounced back from its first loss of the season, eking out a 67-65 win over the Oregon Ducks. The game, despite being an exciting back-and-forth affair, was most notable for Arizona head coach Sean Miller’s postgame interview, which for some reason was done in forced perspective to suggest it was being conducted by a tiny bespectacled wizard.

• The Spurs, playing without their top four scorers, were unable to hold on against the Brooklyn Nets, eventually falling, 103-89, at the Barclays Center. That the Spurs were in the game until well into the fourth quarter is impressive, given the significant minutes they got from Aron Baynes, a player I can only assume is actually a fictional bounty hunter from Gregg Popovich’s unpublished epic science-fiction novel, Space Rest.

• With legendary point guard Oscar Robertson looking on from the stands, Sean Kilpatrick and the Cincinnati Bearcats improved to 11-0 in the AAC with a 63-58 win over the Connecticut Huskies. “I didn’t recognize him at first,” Kilpatrick explained after the game. “But then again, if I’m being totally honest, I was looking for the trash Muppet. But then I realized that was dumb. Because who would bring a trash can full of Muppet into a basketball game? And also someone told me where the guy was sitting, and he wasn’t a trash Muppet at all.”

• Steph Curry poured in 34 points as the Golden State Warriors came from behind to beat the Chicago Bulls, 102-87. “Man, I can’t believe he did that to Derrick Rose,” said tragically forgetful Bulls fan Gordon Johnson as he looked for his keys. “Oh, well,” Johnson added, not realizing he was holding his keys in his left hand while he was looking for them. “At least we still have Scottie to put on Chris Mullin if we get them in the Finals.”

• In their final game before the Olympic break, Alex Ovechkin netted his 40th goal of the season as the Washington Capitals topped the Winnipeg Jets, 4-2. “I cannot wait for plush Sochi vacation lifestyle,” Ovechkin explained after the game. “Two toilets! I can finally, how would you say it, go onesies and twosomes at the same time.” When told such a feat would be difficult even with two toilets in one stall, Ovechkin smiled slyly and replied, “This is not my first trip to Sochi, as they say. I think I can go onesies and twosomes at the same time.”

• Canadian Max Parrot led the field at the inaugural slopestyle qualifying with a run scored at 97.5. However, this was not the first time a Canadian parrot grabbed an early lead in an Olympic event. Back at the 1912 Olympic Games held in Stockholm, Sweden, a Canadian bird named Otis grabbed a shocking early lead in the first-ever modern pentathlon, handily winning the equestrian portion of the event. While many suggested that a bird should not be allowed to compete in the Olympics, for the first time in athletic history a rule book was discovered to have failed to specify that an animal could not participate. Otis briefly became a folk hero in his home province of Ontario. However, Otis’s bid turned tragic when, audibly disappointed by his results in the riflery portion of the event, he cried out, “Shoot me! Shoot me!” And British marksman Hugh Durant, likely suffering from undiagnosed post-traumatic stress from his time served during the Boer War, turned and did just that. Durant was a horrible marksman, and the bird was not killed, but Otis was deeply rattled by the experience and scored poorly in both the fencing and swimming portions of the competition to finish well off the medal podium.