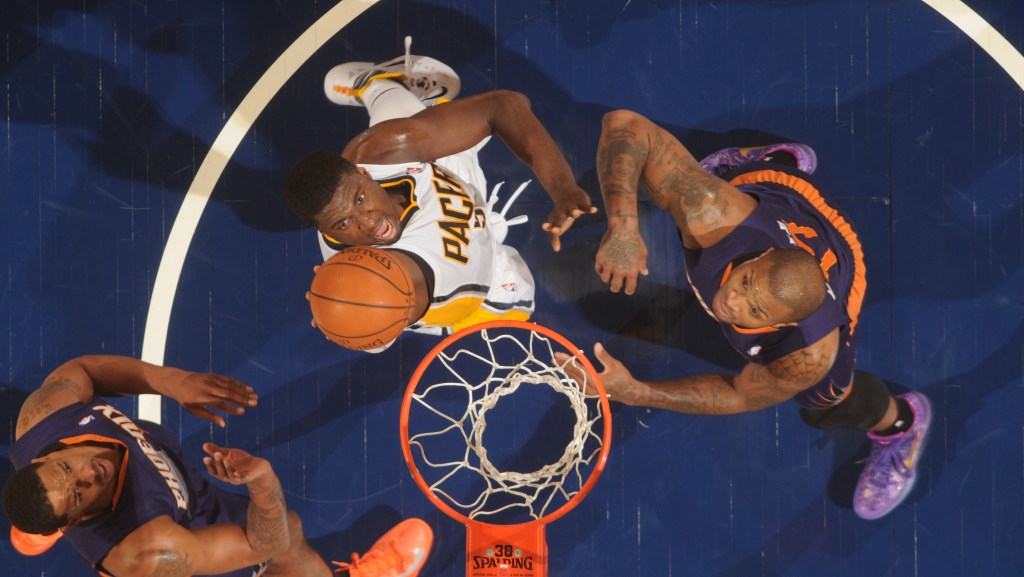 In case you were busy reining it in so your teammates get a little more credit, here’s what you missed in sports on Thursday:

In advance of the big game, all week long we’ll be handing over About Last Night to the stars of Super Bowl XLVIII. Today: Seattle Seahawks cornerback Richard Sherman.

• The best defense in the NBA wasn’t good enough to stop the Phoenix Suns, who handed the Indiana Pacers a rare 102-94 home loss. While some would say this game portends ill for my Seahawks, who also boast a world-class defense, for me this game echoed the words of Emily Dickinson:

I found the phrase to every thought
I ever had, but one;
And that defies me, — as a hand
Did try to chalk the sun

So, that would be bad. Except Emily Dickinson is part of a MEDIOCRE 19th century American poetry movement. Yeah, I said it. MEDIOCRE. Go to Ireland if you’re gonna come at me with some weak poetry to describe your sadness. I’M TALKING ABOUT EMILY DICKINSON: MEDIOCRE.

• Golden State beat up the Clippers, taking down the Pacific Division leaders, 111-92. Now, I don’t want to say the Clippers are in trouble because they think they’re a second-rate LOB, but there can only be one LOB and it’s the Legion of Boom. R.I.P., Lob City. R.I.P.

• Cincinnati stayed perfect in AAC play, beating the defending champion Louisville Cardinals, 69-66. Now, I want to speak to respect a little bit. Does Rick Pitino respect me? I don’t know. And that in and of itself is a problem. Why isn’t anyone asking Rick Pitino about me? That seems to be an unexplored angle on my life. What if someone went to Rick Pitino and asked him to weigh in on Richard Sherman? I mean, right after he loses a heartbreaker to a rival, go up to him and ask him about the implications of Richard Sherman.

• Eli the Ape picked my Seahawks to win the Super Bowl. I mean you gotta respect this ape. One of the greatest apes of all time. Eli has picked seven Super Bowl winners in a row. And, yeah, he throws ducks, but he’s an ape, and if he catches a duck what do you want him to do? Raise it as his own? Come on.

• Longtime Rangers infielder Michael Young is retiring. I don’t know about you, but Young’s retirement makes me think of William Blake:

They laugh at our play,
And soon they all say:
‘Such, such were the joys
When we all, girls and boys,
In our youth-time were seen
On the echoing green.’

Man, that is a mediocre reference on my part. I mean, could it be more on the nose? Get out of here with that weak-ass allusion, me. Yeah, I’m talking about me, RICHARD SHERMAN. That is weak stuff. I had the chance to close it out and I went Blake? Come on, Richard, MEDIOCRE. Get out of here, me.