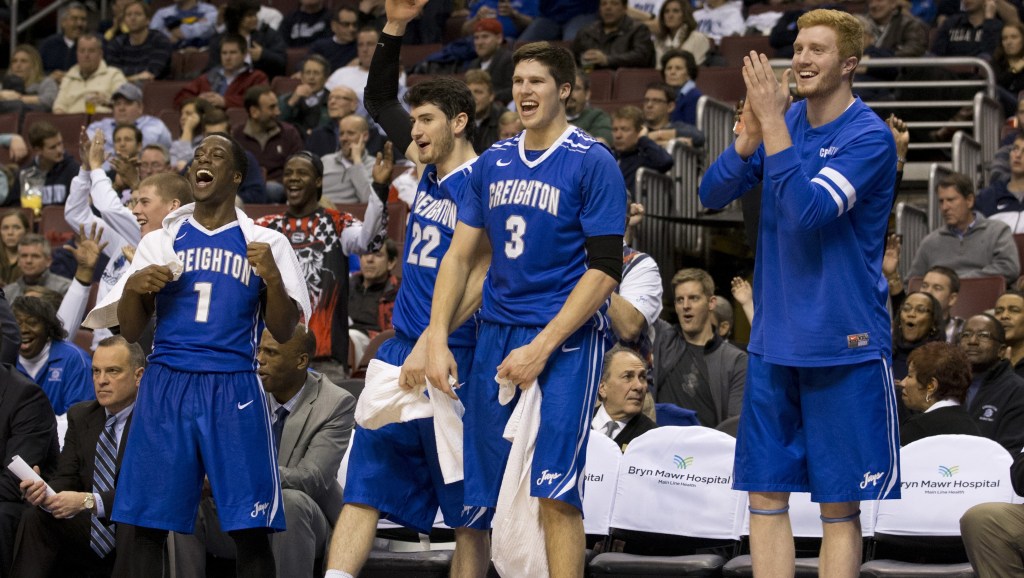 In case you were rattled by the soul-shattering impact of Richard Sherman’s smack talk, here’s what you missed in sports on Monday:

• The Creighton Bluejays sunk 21 3-pointers, including 10 in a row to start the game, as they stunned no. 4 Villanova, 96-68. Everybody knows about Creighton’s Doug McDermott, a Wooden Award candidate who had 23 points in the win, but this result gives us a chance to highlight the rest of the Bluejays team: nine genetically perfect clones of Kyle Korver.

• A great day for college hoops continued as the red-hot Jayhawks grabbed another huge win over a ranked Big 12 opponent, this time taking out the Baylor Bears, 78-68, at Allen Fieldhouse. When asked what sparked his team’s run, Kansas’s Bill Self explained, “For a while there we got caught up in the whole ‘Riggin’ for Wiggins’ thing. But then we remembered we already have Andrew Wiggins. He’s on our team now! So we can just try to win.” Self then shook his head and added, “Do you know how much easier basketball is when you’re trying to win? Much. It’s much easier.”

• NFL commissioner Roger Goodell is reportedly mulling the elimination of the extra point in professional football after deeming the play too easy for today’s kickers. “This is the defining issue of our time in football,” the floating projected head of Goodell said from inside the commissioner’s Emerald Castle. “I am the commissioner, and what I say is not a distraction from other things. It is the most important issue in modern football! Any who question me shall be banished for failure to protect the shield! Banished!”

• Portland failed to sweep its Texas road trip, as Chandler Parsons and the Houston Rockets snapped the Blazers’ winning streak at five with a 126-113 victory. “Tough loss,” said Portland superfan Alex Standley, “but, hey, big silver lining. I decided that my slamwave prog one-man cover band is definitely going to be called the Chandler Parsons Project.” When asked if he thought it was strange to name his band after a player on a rival team, Standley replied, “No, I’m terrible at making music, and I have no plans to get better. It’s an insult. A clear and direct musical insult.”

• Taj Gibson’s buzzer-beating layup in overtime gave the resurgent Chicago Bulls a 102-100 win over the struggling Los Angeles Lakers. The game, which was played with injured Lakers guard Kobe Bryant in attendance, saw Lakers guard Nick Young score 31 points in a relatively mistake-free performance. “Fear can be a powerful motivator,” Bryant explained after the game as Young cowered alongside him. “But not powerful enough given the result.” Bryant then threw down a smoke bomb and disappeared into thin air, leaving a terrified Young to mumble, “Is he behind me? I really hope he isn’t directly behind me.”

• Vancouver head coach John Tortorella was suspended 15 days after he started his fourth line in an attempt to provoke a brawl against the Calgary Flames. Oh wait … no … that was Flames coach Bob Hartley who provoked the brawl. He wasn’t suspended for his actions. Tortorella was suspended for trying to confront Hartley after provoking a brawl that saw eight players ejected for fighting. Got it! Guys, this is exciting! I’m starting to really understand hockey!

• Canadian teenager Eugenie Bouchard is into the semifinals of the Australian Open after upsetting Ana Ivanovic, 7-5, 5-7, 6-2. However, Bouchard continues to avoid my hard questions about her time at Degrassi Junior High, saying only, “That show was set in Toronto. I’m from Quebec. Do you have any idea how large Canada is? Have you ever really familiarized yourself with our nation at all?” Unlike Bouchard, though, I won’t duck the hard questions: No, I have no idea how large Canada is, and I just figured out how hockey works, so maybe cut me a little slack, eh?

• Joe Johnson and the Brooklyn Nets throttled the New York Knicks, 103-80, in a Monday matinee at Madison Square Garden. As the game wound down, nothing more than a tragic formality, a man and his son watched from their apartment in Queens. “What if we went, father?” the boy asked as Knicks coach Mike Woodson subbed in Cole Aldrich. “What if we went to the garden of Madison squares?” The father shook his head, but the boy pressed on. “Maybe our presence and enthusiasm will make them play better,” the boy posited. “Maybe our love will give them power.” But the man shook his head and, without taking his eyes off rarely used guard Toure’ Murry, told his son, “No. Love is not an exchange. To give love is a donation. To expect anything in return for your love is to be a fool.” The boy nodded, before cocking his head. “But father,” the boy said, “I love you.” And the words hung in the air as the boy and the man sat in silence, waiting for the clock to run out.