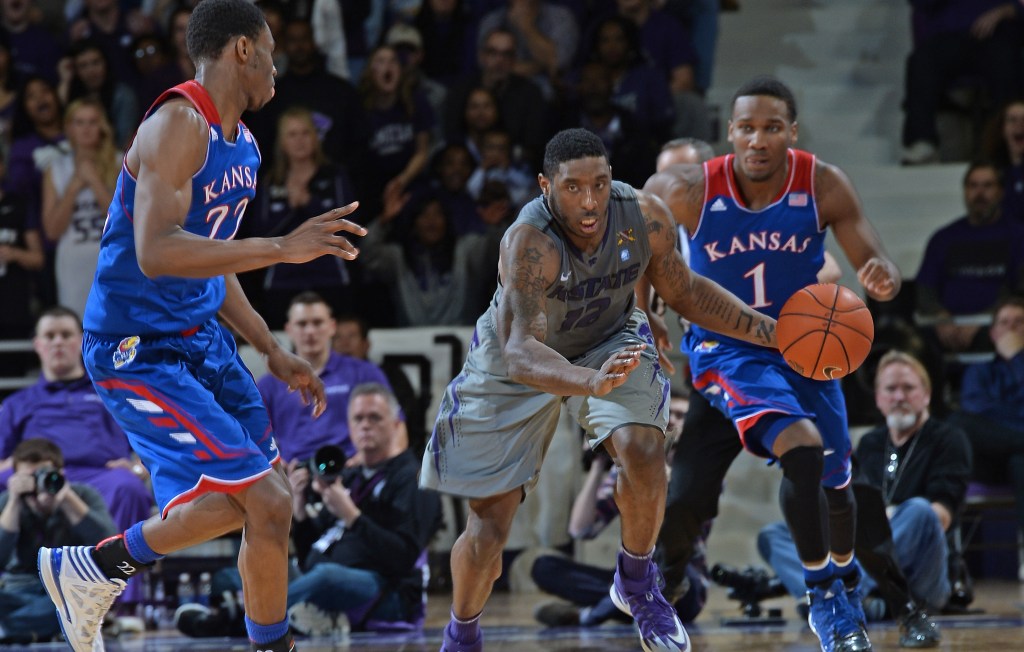 In case you were busy reliving your own horrific bout with conjunctivitis one Bob Costas closeup at a time, here’s what you missed in sports on Monday:

• Kansas State grabbed a season-defining win, stunning rivals Kansas 85-82 in overtime. Also impressing in the Big 12 was West Virginia, who dominated Iowa State, holding Melvin Ejim to six points en route to a 102-77 win. “It’s all falling into place,” said cloaked Texas head coach Rick Barnes as he sat in a tower high above the UT campus in Austin. “Yes, yes. Soon the Big 12 shall be mine! And then who will remember what round my team was eliminated in when Kevin Durant was here? No one!” Barnes then shattered a vinyl copy of Sam Cooke’s “Only Sixteen” as his maniacal laughter echoed through the campus.

• Dwight Howard scored 18 and collected 15 boards for the Houston Rockets, who beat Kevin Love and the Minnesota Timberwolves 107-89. “Rough night for Dwight,” Howard said after the game, as he sat alone by his locker with a towel draped over his head. “Everything was going great when I went up to Kevin and was all like, ‘What is Love? Baby don’t hurt me.’ And then I was all doing the Night at the Roxbury dance, which is a total classic, and boom: Chandler Parsons is supposed to come in. Really stick it to Kevin, because of his name and because the Roxbury dance takes two dudes totally committed to the bit. But he’s not there. Totally reminiscent of last year in LA.” Howard shook his head and continued, “So I go up to him after the whole thing fizzled out, and was like, ‘You? Me?’ and he was all like, ‘That bit’s kind of played, man.’ He totally covered me in Dwight-Out. Me! Dwight!” Howard then looked up and asked plaintively, “What is love? You know? Really, what is it?”

• Julia Mancuso won her fourth career Olympic medal, shocking the super combined downhill field to take bronze in her third Olympic games. Knocked off the podium by Mancuso’s effort was Slovenia’s Tina Maze, who called the result “Landon Donovan all over again.” “Screw Landon Donovan, now and forever,” Maze said. “Slovenia will have our revenge. Slovenia will rise again!”

• LeBron James put on a dazzling athletic display of dunks in practice, though he will once again be sitting out the NBA All-Star weekend dunk contest. When asked about LeBron James’s feats in practice, former Sixers guard Allen Iverson nodded silently for 10 seconds before spontaneously combusting. Iverson is survived by his family, and his thoughts on practice.

• Olympic snowboard halfpipe qualifying was canceled and then reinstated amit complaints about slushy course conditions. Come on, Russia — slushy problems at a halfpipe? At least make the world work for the laughs. That’s just Dwight Howard–esque.

30 Questions at the NHL's Olympic Break