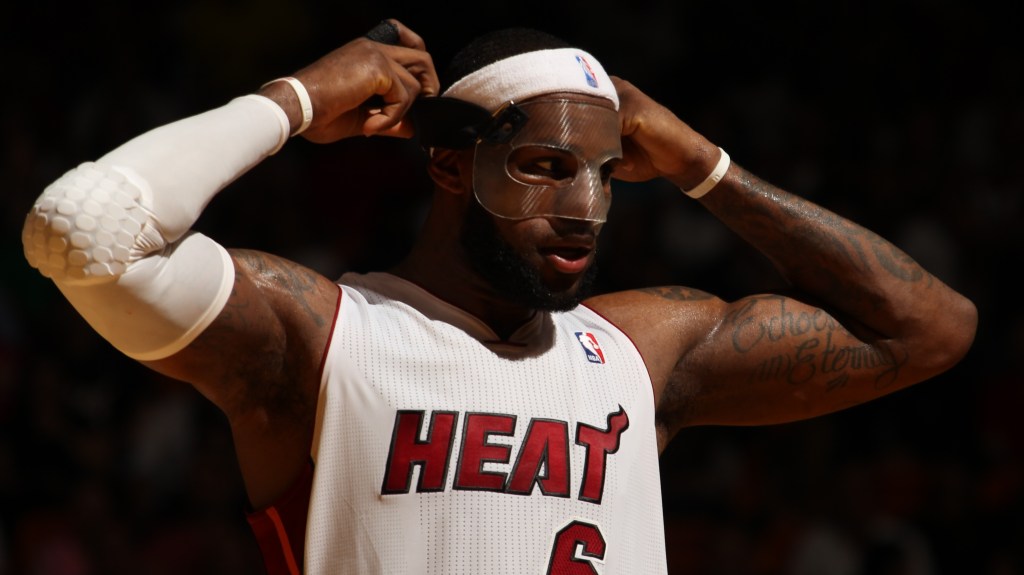 In case you were busy propping the door to a career in baseball open with your Super Bowl ring, here are five stories you missed in sports on Monday:

• LeBron James poured in a career-high 61 points for the Heat in Miami’s 124-107 win over the Charlotte Bobcats. “A pretty good game from me, but it really made clear when I let everyone down this year,” a rueful James said afterward. “Missing the dunk contest. Doing the contest would have gotten everyone questioning my heart off my back. But as it stands now, I’m still wide open to totally fair criticism from those who would suggest that my legacy is affected by my lack of dunk titles. Totally fair. Absolutely, totally fair.”

• Minnesota topped Denver in a shootout, and the Lakers upset the Blazers, but none of that matters because of the Knicks. Oh dear Lord, the Knicks. The Knicks lost again, their seventh consecutive defeat, 96-85 at the hands of the Detroit Pistons. And a boy and his father did not watch the game together in Queens. The father received a call from an old relation earlier in the day offering him a single ticket to the evening’s game at Madison Square Garden. And, after some consideration, he gave it to his boy, along with a MetroCard. “You’re a man, and this is your city, and you are a man inside of it,” the father said to the boy. The boy looked up at him. He nodded. Gratitude washed over him. Hours would pass before the father saw his boy again.

• And he realized his mistake: His son was not a man. Just a boy, a boy adrift in a city destined to crush him. It would be hours before the boy made his way home. And when the boy walked through the door, the man and the boy did not exchange words. What is the point of saying you are sorry to your child when you’re suffering just as deeply as he is?

At the bottom of the barrel of NFL offseason coverage:

• Suddenly-beleaguered 49ers head coach Jim Harbaugh came out publicly saying he wants to put talk of a scuttled move to Cleveland behind him and do one thing: “coach the team.” Harbaugh then added, “Look, where else can I cover my legs and torso in marshmallows, then wrap those marshmallows in khaki and polar fleece and run around screaming on national television? Cleveland? No way. I would never get on national television from Cleveland.”

• The Buffalo Sabres’ brief winning streak was snapped by former coach Lindy Ruff’s Dallas Stars 3-2. The loss came days after Ryan Miller was traded away and team president Pat LaFontaine abruptly resigned. But the good news for Buffalo is that their hunt for a top pick in the upcoming NHL draft is still alive. Oh, what a magical time to be a Sabres fan!

In college basketball irrespective of gender:

• While the North Carolina men grabbed their 12th straight win, 63-61 over Notre Dame, the Connecticut women were even more impressive, finishing their regular season 31-0 after beating third-ranked Louisville 68-48. “A perfect season,” Stamford resident and disgraced financier Blair Whitson said to his wife, Martha, as he read about the game in the Greenwich Time the next morning. “For the women, that is.” Martha looked up from her dog-eared L.L.Bean catalog and considered what a perfect season would look like for the women of the Whitson family. It surely would involve a divorce settlement not bound by the draconian prenuptial agreement she’d been made to sign decades earlier, half-cocked on cognac while summering in Amagansett. It would also include less snow than they had this winter, and fewer corresponding evenings staring across the table at her husband, neither able to satisfy their rapacious desires with their respective flings. It certainly wouldn’t involve the hideous excuse for lovemaking the two partook in a week earlier, in a half-crazed attempt to satisfy each other as they had in their youth. “Oh dear,” Martha said aloud as she dropped her catalog, and realized that a perfect season for her would come about only if Blair were to pass on. “Well, you’re right, I shouldn’t jinx it,” Blair added with a wry smile as he adjusted his reading glasses. “There’s still a few more games afoot before it’s all said and done.” Martha met his eyes and smiled as well, as her thoughts turned sinister. “Indeed there are,” Mrs. Whitson said with a well-trained frigidity. “Indeed there are.”